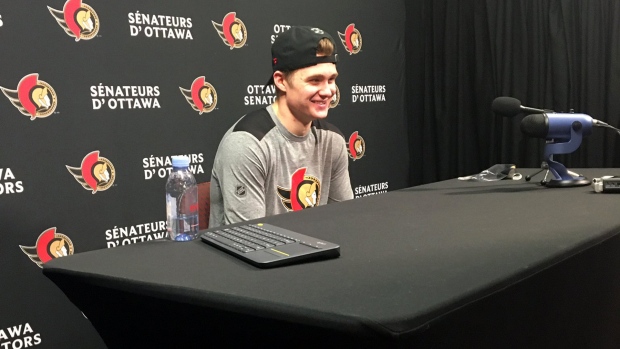 “An unbelievable day,” was how Tim Stuetzle described his first day as a National Hockey League player.

The third-overall selection in last October’s NHL Entry Draft admitted to being nervous as he took to the ice with his Senators’ teammates for the first time on Sunday.

“To be on the ice with NHL guys…for me it's just very excited for sure,” he said with a smile. “I was nervous at the beginning, but like I said before, the boys did all the best to get the nerves away from me, so I felt good and I felt very comfortable on the ice with them.”

There was the obligatory chirping of the highly-touted rookie by his new teammates, and he even led the team stretch at centre ice at the urging of winger Brady Tkachuk.

Stuetzle played left wing on a line with Evgenii Dadonov and Derek Stepan. Stepan was also making his Sens training camp debut Sunday morning after spending the past week quarantining in the same hotel as Stuetzle.

Stepan, who was acquired by Ottawa on Boxing Day, was delayed getting to camp due to the birth of his third child. Stuetzle and Stepan bonded during the past week at the hotel, with the veteran becoming a bit of a counsellor to the youngster.

Senators head coach D.J. Smith said that time together was one of the reasons why he paired them on a line at Sunday’s practice.

“I got to know him a little bit,” said Stepan, an 11-year NHL veteran. “He's a good kid. I was joking with my wife, but I have three little ones at home, and I adopted a German 18-year-old.”

The young rookie appreciated the tutelage as the pair did their best to prepare for camp.

“He's like a great mentor and he really helped me a lot during quarantine,” added Stuetzle. “We had workouts in the hotel, and we get to know each other pretty great.”

Not since Jason Spezza was chosen second overall by Ottawa in 2001 has there been this much excitement in the nation’s capital surrounding prospect. Stuetzle appears ready to prove the euphoria surrounding his arrival is warranted.

The past few months have been a whirlwind for Stuetzle. He sustained a broken hand a week after the draft while practising with his club team in Germany. Two months later he joined Team Germany for the World Juniors in Edmonton. The German captain led his team to the country’s first ever appearance in the quarterfinals, where they lost 2-1 to Russia. Stuetzle finished with 10 points in five games and was named the tournament’s top forward.

Then it was on to Ottawa, where fans and teammates can’t seem to get enough of the gregarious Stuetzle. The rookie has already moved out of the hotel and into a house shared by Tkachuk and Josh Norris.

In a city where there hasn’t been a whole lot of excitement surrounding its hockey team, Stuetzle’s arrival has certainly created a renewed level of anticipation for the upcoming season. It is expected that Stuetzle will make his NHL debut on Friday when the Senators open their season against the Toronto Maple Leafs.

That also happens to be Stuetzle’s 19th birthday, giving Sens fans yet another reason to celebrate the rookie.