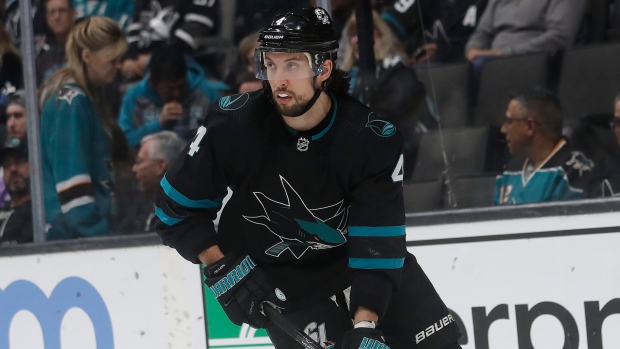 The San Jose Sharks have traded defenceman Brenden Dillon to the Washington Capitals in exchange for a 2020 second-round pick and a 2021 conditional third-round selection.

TSN Hockey Insider Pierre LeBrun reports the condition on the third-round pick is in the event of the Capitals winning the Stanley Cup. Should Washington win, the 2021 third-round choice becomes a third-rounder in 2020, which was originally owned by the Arizona Coyotes and acquired by the Caps last summer in the Andre Burakovsky trade.

Dillon has one goal and 14 points in 59 games with the Sharks this season. He ranks fourth in average ice time amongst Sharks’ defencemen.

The 29-year-old was signed as an undrafted free agent by the Dallas Stars in 2011 and acquired by the Sharks via trade in Nov. 2014. He has remained a constant on San Jose’s back end ever since and helped the team reach a Stanley Cup Final in 2016.

Dillon was signed by the Sharks to a five-year contract extension in 2015 worth $3.27 million against the salary cap. The New Westminster, B.C., product is set to become an unrestricted free agent at season’s end.

The Sharks will retain fifty per cent of Dillon's salary.

In 588 career games, the defensive-minded Dillon has accumulated 114 points.