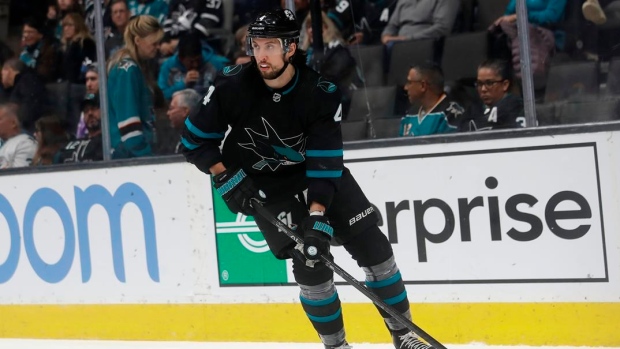 Washington sent Colorado's 2020 second-round pick and a conditional 2021 third-rounder to San Jose for the pending unrestricted free agent. The Sharks are keeping half of Dillon's salary and cap hit to facilitate the move.

“Brenden is an experienced defenceman who plays a solid defensive game with a high compete level and physicality,” Capitals general manager Brian MacLellan said. “We felt it was important for us to add a player of his calibre to our defensive group.”

Dillon, 29, shoots left-handed but should fit into Washington's top four on defence. He has averaged just under 20 minutes a game this season for the Sharks, who have underachieved and been barraged by injuries.

San Jose is expected to continue to sell ahead of the NHL's Feb. 24 trade deadline.

"Brenden Dillon has been a leader on and off the ice for our team for the past four-plus seasons," Sharks GM Doug Wilson said. “Few players in Sharks history have displayed the class and character that Brenden exudes. ... However, because of where we find ourselves in the standings this season, it's imperative that we look towards acquiring assets for the future.”

The Capitals made the trade after going 1-2-0 on a road trip. They've lost six of nine and are in danger of falling out of first place in the Metropolitan Division for the first time since October.

Defence has been an issue for Washington recently. Experimenting with rookie Martin Fehervary in the top four didn't work, and Dillon could play on the Capitals' second pairing with Dmitry Orlov.

Dillon is in his ninth full NHL season. In 588 regular-season games with the Sharks and Dallas Stars, he has 114 points on 22 goals and 92 assists.

It's unclear when Dillon will join his new team, which next plays Thursday against Montreal.