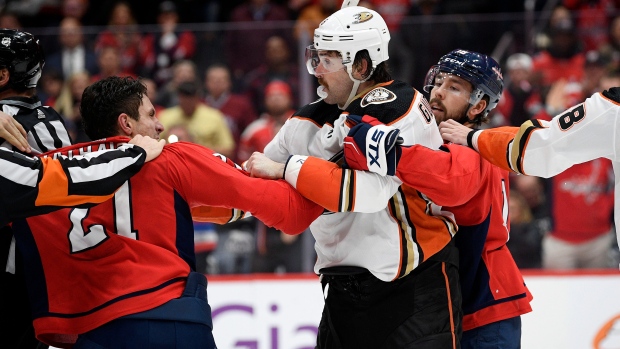 The incident occurred in the final minute of the second period in the Capitals’ 5-2 win. With a referee between them, Hathaway reacted to a punch by Gudbranson by spitting on him. He received a five-minute match penalty and was ejected from the game for the incident.

“Unfortunately, spit came out of my mouth after I got sucker-punched and it went onto him,” Hathaway said post-game. “It has no place. It was an emotional play by me. You don’t plan any of that stuff in your head, and it was a quick reaction and unfortunately the wrong one for me to a sucker punch.”

A fight broke out between multiple members of the Capitals and Ducks after Chandler Stephenson scored, with Hathaway drawing an assist, to put Washington up 3-0 with 33.4 seconds left in the third period. Hathaway fought Derek Grant, but was pursued by Gudbranson after driving his forearm into Grant’s head while the two were on the ice.

"That's about as low as you dig a pit, really,” Gudbranson said of Hathaway spitting at him. “It's a bad thing to do. It's something you just don't do in a game, and he did it."

Hathaway has two goals and seven points in 23 games this season. He doubled his penalty minutes on the season to a total of 30 with Monday’s actions.

“These games can get physical and they can get nasty,” Ducks coach Dallas Eakins said. “These guys’ll throw down, drop their gloves, that stuff goes on in the game, but what I saw there I haven’t seen – I think I’ve been in pro hockey 30 years maybe – and I’ve never seen that before. It’s just something you don’t see in the game.”

Hathaway, 27, has 18 goals and 47 points in 198 career games with the Calgary Flames and Capitals.