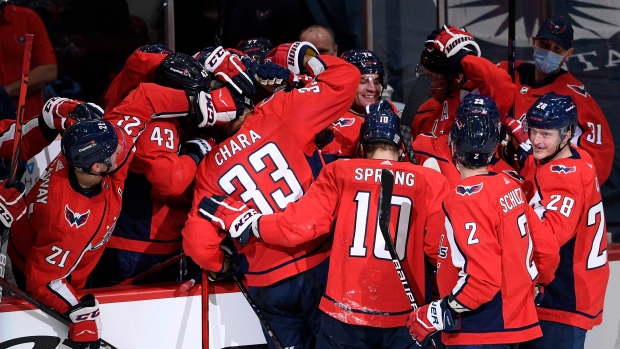 WASHINGTON — Zdeno Chara scored for the first time with his new team to cap a five-goal second period, and the Washington Capitals came back to stun the New York Islanders with a 6-3 victory Thursday night.

The Islanders led 3-0 before Washington scored four goals in 5:09. Conor Sheary scored his first two with the Capitals, Garnet Hathaway tied it and John Carlson gave them the lead on the power play.

Then Chara's slapper from just inside the blue line beat Semyon Varlamov clean, making it five unanswered goals in under 10 minutes. The 43-year-old former Boston Bruins captain was mobbed by teammates at the bench while Islanders players looked shell-shocked by the turn of events.

“Very excited to get the first goal as a member of Washington Capitals, but I returned to the bench to the guys right away because I just wanted to share that joy and excitement with them,” Chara said.

New York was in command after first-period goals by Oliver Wahlstrom, Casey Cizikas and captain Anders Lee. It appeared as though Stanley Cup-winning coach Barry Trotz's moves to put Wahlstrom in for tough guy Ross Johnston and shuffle the lines were working after losing to the Capitals on a last-minute goal Tuesday night.

Instead, the Islanders lost in regulation for the third game in a row.

“You lose two games (at Washington) and get zero points and now you’re looking up at a few teams,” Trotz said. “This ended up being a wasted two games here for us.”

The Capitals set a franchise record by starting the season with an eight-game point streak. They did so without five regulars: captain Alex Ovechkin, centre Evgeny Kuznetsov, defenceman Dmitry Orlov and goaltender Ilya Samsonov missed a fourth consecutive game because of COVID-19 protocols, and centre Lars Eller was out with an upper-body injury.

Vitek Vanecek made 27 saves in his fifth consecutive start in net, Tom Wilson scored an empty-netter with 18.7 seconds left and the Capitals remained unbeaten in regulation under first-year coach Peter Laviolette.

“A lot of teams don’t come back from 3-0,” Hathaway said. “It’s a big stepping stone for us, especially in the locker room and all the guys we have in our lineup right now.”

Washington hadn't played without two of its top three centres (Nicklas Backstrom, Kuznetsov and Eller) since acquiring Eller in 2016. Getting Wilson back from a lower-body injury gave the Capitals the flexibility to shift winger T.J. Oshie to centre, which won't be a permanent thing.

“Our hands get tied sometimes," Laviolette said. "We’re dealing with some stuff and what we’re able to do. This to me seemed like a good option.”

Lee's 500th regular-season NHL game was his 157th with the “C” on his chest. When Trotz joined the Islanders in 2018 after coaching the Capitals to a championship, he asked every player to list his top three choices to be captain since John Tavares left for Toronto in free agency.

“It was almost unanimous that the No. 1 spot was Anders Lee,” Trotz said. “They all said that he was a good pro, he does everything the right way and he cares about the whole group.”

The Islanders were regretting a bookkeeping decision in the middle of the second period when Varlamov ordinarily would have gotten the hook for rookie Ilya Sorokin. Only the team put Sorokin on the taxi squad before the game and allowed veteran Cory Schneider to back up.

Schneider hasn't appeared in an NHL game since March 6. Varlamov had to play out his worst start of the season, allowing five goals on 22 shots.

Capitals defenceman Justin Schultz left the game 48 seconds into the third period when he took a puck to the face. Brock Nelson's shot bloodied Schultz on the right side of his face, and he immediately went down the tunnel for repairs.

"That’s really unfortunate because he was one of our top players and he was playing just fantastic," Laviolette said while Schultz was still being evaluated. “Hopefully it’s a short turnaround.”

Now more than week into quarantine, it's unclear when Ovechkin, Kuznetsov, Orlov and Samsonov will be able to return.

Islanders: Travel to Philadelphia for a back-to-back set with the Flyers on Saturday and Sunday.

Capitals: Chara faces his former team for the first time Saturday when the Boston Bruins come to town for the first of two consecutive games.