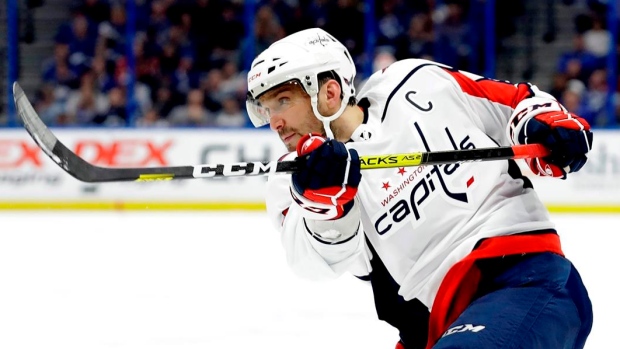 That’s the number of goals Washington Capitals winger Alexander Ovechkin has scored over the course of his career, already within the National Hockey League’s top 10 all-time.

Ovechkin has tremendous opportunity to jump inside of the top three this season – he’s just 60 goals back of Jaromir Jagr for third overall and 188 goals away from the top spot, held by Wayne Gretzky.

Where Ovechkin will end up on the all-time list is really up to him. Though he is now 35 years old and in the final year of a $124-million contract, he is as impressive as ever on the ice.

Ovechkin scored 48 goals last season, sharing his ninth Rocket Richard trophy with Bruins forward David Pastrnak. In other words: this is not a player in the twilight of his career, scratching and clawing his way to stay inside of his team’s top six. This is the league’s preeminent goal scorer who appears to have years of high productivity left, assuming he wants to continue to play.

What’s particularly interesting about Ovechkin and his run at being crowned the best goal scorer ever – if he isn’t there already – is that he has been uniquely sidetracked by the league.

As predictable as Ovechkin’s goal scoring has been over the course of his career, so too has been his durability. The Russian sniper simply does not miss games to injury, and it’s paid huge dividends for a Capitals franchise that has relied on him to deliver sustained offence over the years: 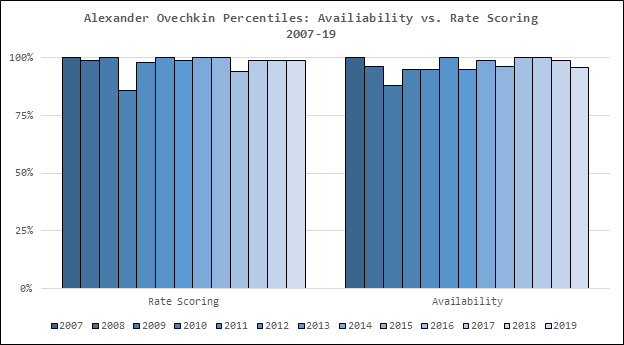 This is a rather silly looking graph because of how impressively consistent the Capitals captain has been, but it also drives home the point that it’s just as difficult to find players as durable as Ovechkin as it is to find a goal scorer as productive as Ovechkin.

Which brings me to an uncomfortable reality for the NHL, and that’s the sheer number of games that Ovechkin has missed outside of his control. Let’s reflect on those stretches for a moment:

Two different labour stoppages and a global pandemic have effectively taken 155 games from Ovechkin’s resume. And because of how stable Ovechkin’s durability and productivity have been over the last two decades, we can reasonably assume that (a) he would have been available for the lion’s share of those games; and (b) would have scored a bunch of goals in those missed games.

How many goals are we talking about? We can do some fairly quick math to assess what that would’ve looked like. Let’s make a few assumptions!

- 2012-13: This was a shortened season where Ovechkin scored 32 goals in 42 games, near his career average. We can infer this season cost Ovechkin about 23 goals.

- 2020-21: Ovechkin will play up to 56 games this season. In the previous three seasons, Ovechkin has averaged 53 goals per 82 games played. Assuming Ovechkin plays to his career average and remains similarly durable, we can assume he will lose 17 goals outside of his control.

Those are four pretty conservative assumptions, and they take about 100 goals out of Ovechkin’s profile. A similar attempt at quantifying the loss Ovechkin has incurred from outside factors, completed at Russian Machine Never Breaks last week, has it at 96 goals lost. It’s a significant number, and one that may convince those who are on the fence of crowning the Russian as the greatest goal scorer ever to change their tune.

For frame of reference, consider the actual goal scoring leaderboard versus where we would be without the stoppages:

This isn’t to say other players haven’t been adversely impacted by external factors – Gretzky, for an obvious example, played through a shortened 1994-95 season. But it seems significant to point out that a player like Ovechkin, playing in one of the lowest-scoring eras in the history of the NHL, would likely already have passed Jagr and Gordie Howe on the scoring list and be two seasons away from catching The Great One if not for situations completely out of his control.

Here’s to hoping Ovechkin sticks around the NHL for a few more seasons and makes this chase as compelling as possible.