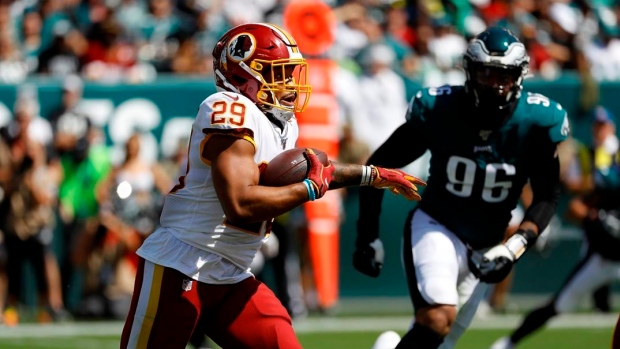 "Anytime you have to release a very talented player, it's always a tough decision,"  Rivera said. "We take those allegations very, very seriously and we had to make a decision. I talked to [Washington's] players yesterday that I made a decision I believe was in the best interest of our organization and if it was the right decision we'll benefit from it and if not it will be on me. I will take full responsibility going forward to make sure we do things the right way."

Guice, 23, was a second-round pick out of LSU in the 2018 NFL Draft. He ended up playing in only five games over two seasons with Washington due to a number of knee issues. Guice was arrested on three counts of domestic violence in Loudon County, Virginia.

"Derrius is a gifted young football player and again, it's one of those things where we're trying to get ready for the season and one thing we can't have is situations and circumstances that are beyond our realm," Rivera said. "He's going to have to deal with something for a while, and his opportunity to get prepared and ready for the season would be limited."

With the release of Guice, the team still has a number of running back options including veterans Adrian Peterson and Peyton Barber, fourth-round pick Antonio Gibson and former Stanford standout Bryce Love, who missed all of his rookie season with a torn ACL.

The team's next personnel move following the release of Guice was activating linebacker Reuben Foster from the PUP list on Sunday. A first-round pick in 2017 by the San Francisco 49ers, Foster was claimed by Washington in 2018 after his release following a second charge of domestic violence (both charges would later be dropped). Foster has yet to play for the team due to a torn ACL last year.

Rivera insists that Guice and Foster's situations are unique and not comparable.

"Reuben and I have talked about these things," Rivera said. "The one thing Reuben has really shown since I've been here is he's doing things the right way. He's doing things the way we need him to do. He's done a great job in terms of his rehab and a great job working with our coaches. Here's a guy that needed a change of scenery. That may be one of the things that truly benefited him. Who knows, that's might be needed in Derrius' case, an opportunity to get a change of scenery."

Rivera, 58, took charge of Washington in January after spending the last nine seasons as head coach of the Carolina Panthers.