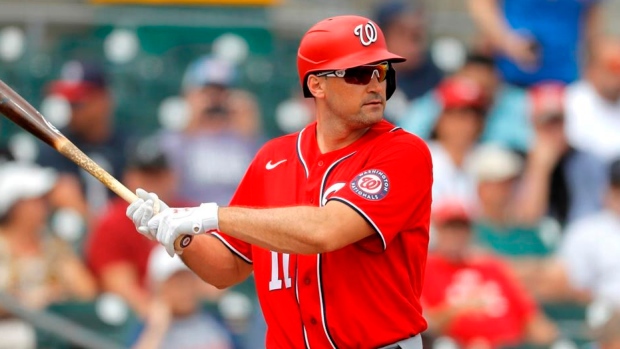 EDITOR’S NOTE: Ryan Zimmerman is a two-time All-Star infielder who has played 15 years in the majors, all with the Washington Nationals. He holds most of the team’s career hitting records, and his two homers and seven RBIs last post-season helped the Nationals win their first World Series. With baseball on hold because of the coronavirus pandemic, Zimmerman occasionally will offer his thoughts -- as told to AP Sports Writer Howard Fendrich -- while waiting for the 2020 season to begin. This is the second installment.

Putting every team in Arizona in May? There would be so many variables and so many things that would have to be worked out that it’s hard to fathom that it would work.

One example: I get to the field at 2 o’clock to play a 7 o’clock game at night. If we’re not going to be able to have any crossover between teams, then say we’re playing Game 3 of a tripleheader at Chase Field that day -- how much time do they have between games to disinfect the entire clubhouse?

Do I have a locker? Or do I just show up with my uniform on, AAU travel ball style? And then I just go right out to the field with my bag to start the game? Then you’re going to have people getting hurt.

We don’t get there at 2 o’clock for a 7 o’clock game just to get a chance to hang out with our friends. We have a whole process that we go through to prepare and get our bodies ready to play so we don’t get injured.

I have my third child due in June. If this “bubble” in Arizona was going to happen starting in May, you’re trying to tell me I’m not going to be able to be with my wife and see my kid until October?

I’m going to go four or five months without seeing my kid when it’s born? I can tell you right now that’s not going to happen.

Not many people have to go through that, nor should they.

Then you might get people who would say, “Oh, well, then someone else who doesn’t have kids will play.” The more things that happen like that, then you have to worry about the product on the field.

I know everything’s being done by everyone in good faith. We want to play; we want to give people something to watch on TV; people love sports.

But you’ve got to consider the human element. Maybe pump the brakes a little bit. Maybe this wasn’t supposed to be leaked yet. I don’t know if we’re at the point to set this sort of thing up yet.

This virus situation is obviously bigger than sports. Bigger than anything. People’s lives and health take precedence over everything.

So I think the thought process of trying to get sports back is a good idea for the mental health of the country. People love watching sports, so to give them that would be great.

It’s just you’ve got to kind of check the temperature of everything going on.

Look, all of us want to play. That’s what we do: We play baseball. You wouldn’t ask a single person and have him say, “I want the season to be cancelled” or “I want to continue to not play.”

But you have to be sensitive to people dying and people having family members in intensive care.

And you have to think: Is it really that important to figure out how to play baseball right now?