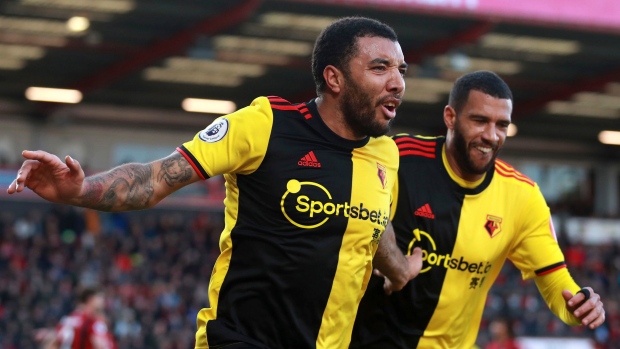 Abdoulaye Doucoure gave Watford the lead in the 42nd minute off a cross from Ismaila Sarr after Bournemouth goalkeeper Mark Travers gave the ball away in his first league appearance this season.

Troy Deeney added Watford's second in the 65th, blasting the ball into the net after Bournemouth fumbled its chance to clear another Sarr cross. Roberto Pereyra added a third in stoppage time.

Watford is now five games unbeaten in the Premier League. Since Nigel Pearson became its third manager of the season last month, the club has lost just once in all competitions — to league leader Liverpool on Pearson's debut in charge.

Bournemouth hasn't won any of its last five Premier League games and has lost nine of the last 11, with the only win in that time coming against Chelsea last month. Bournemouth is 19th in the table as it faces dropping out of the top tier after five seasons.

Boos echoed around Bournemouth's ground at the final whistle.

Eddie Howe's Bournemouth team had started the game well, with Harry Wilson forcing a good save from Watford goalkeeper Ben Foster, but faded as the game went on.