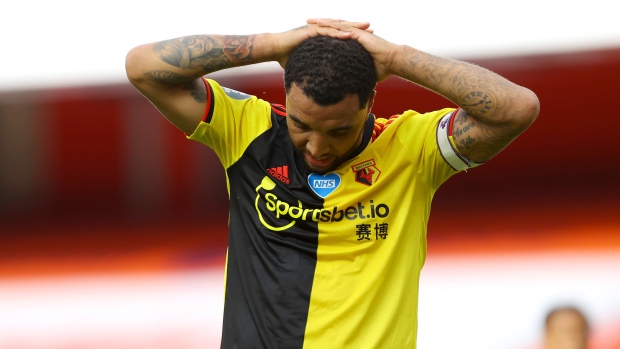 LONDON — Watford’s five-year stay in the Premier League ended when the team was relegated after a 3-2 loss at Arsenal on the final day of the season on Sunday.

The Hornets started the day in third-to-last place and needed to overtake Aston Villa, which was ahead only on goal difference, to survive.

Villa drew 1-1 at West Ham but Watford couldn't capitalize, conceding three times in the first half at Emirates Stadium.

Pierre-Emerick Aubameyang hit a first-half double — taking him to 22 goals for the season — either side of Kieran Tierney’s first goal for Arsenal.

Yet Mikel Arteta’s team will have to be better than this showing if it is to beat Chelsea in the FA Cup final on Saturday.

Deeney, Watford's captain, said he could have played his last game for the club after revealing he would undergo surgery on a troublesome knee in the coming days.

“Clubs can go in different directions and players can," he said. “If that is my last game, I am happy I went out on my shield.

“I am a simple man. Did I go out and do everything I could? Yes. Was it good enough? No.”

Speaking about the season as a whole, Deeney said: “This is a reflection of the whole year — not quite been good enough. It’s heartbreaking for the people who work behind the scenes and we feel sorry for them.