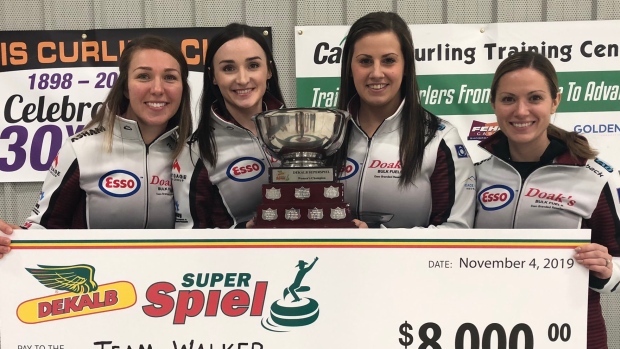 Laura Walker and her new rink out of Edmonton won their second event as a foursome at the DEKALB Superspiel in Morris, Man.

Walker, who is skipping a new team this season of third Kate Cameron, second Taylor McDonald and lead Nadine Scotland, went a perfect 6-0 over the four-day event with victories over Theresa Cannon, Darcy Robertson and Mackenzie Zacharias in the playoffs.

Earlier this season, Team Walker had another undefeated run to capture the Mother Club Fall Curling Classic in Winnipeg. The 28-year-old Walker will attempt to qualify for her first career Scotties Tournament of Hearts later this year at Alberta playdowns and should be contention especially with Team Chelsea Carey wearing Team Canada colours as the defending champions.

Happy to finish the weekend as @DekalbSS Champs! 🏆

Thanks to the volunteers for the hospitality and snacks, the ice crew, and our sponsors for their support! Thanks for a great games ladies @TeamZacharias! pic.twitter.com/1LJ65eYdTJ

On the men's side of things, Winnipeg's Team Mike McEwen came up just short of winning their second event of the season, falling to Team Tanner Horgan in an extra end in the final, 7-6.

This was the second win of the season for 21-year-old Horgan who skips a rink of third Colton Lott, second Kyle Doering and lead Tanner Lott.

@DekalbSS Champs! The team played phenomenal all weekend and capped it off with skipper drawing the lid to win in the extra! This is back to back wins for the team and gives us some huge momentum heading into the @grandslamofcurling Tier 2 event tomorrow! #TeamHorgan pic.twitter.com/SIyfisHpK0

Isabella Wrana's young rink from Sweden had another successful weekend on the World Curling Tour as they captured the Royal Lepage Women's Fall Classic in Kemptville, Ont., for their second victory of the 2019-20 season.

Skip Wrana, third Jennie Wahlin, second Almida de Val and lead Fanny Sjoberg posted a 6-0 record over the four-day event, capping it all off with a victory over Scotties regular Team Krista McCarville from Thunder Bay in the final, 5-3.

Thanks for a great spiel and congratulations to @TeamWrana pic.twitter.com/yvEqOo6o5h

Out East, Japan's Tori Koana won the Mayflower Cashspiel in Halifax with a 5-3 victory over the hometown rink led by Theresa Breen. Prince Edward Island's Suzanne Birt and Jill Brothers of Nova Scotia, who both represented their provinces in the Canadian championship in 2019, each fell in the semifinal round.

Quebec's Vincent Roberge won the men's side of the event with a 7-5 victory over Nova Scotia's Stuart Thompson.

Overseas, Italy's Joel Retornaz captured the Grand Prix Bern Inter Curling Challenge in Switzerland while Marie Turmann of Estonia took the Tallinn Ladies International Challenger in her country with a win over Nora Wuest in the title match.