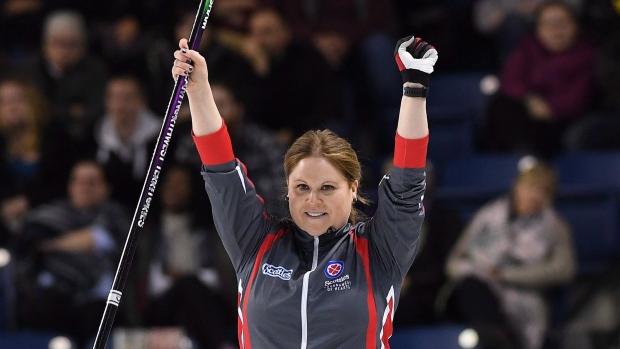 Take a look at all the results from this past weekend in the curling world with TSN.ca's WCT Recap.

Yellowknife's Team Kerry Galusha picked up their first victory of the 2018-19 season by capturing the Royal LePage Women's Fall Classic in Kemptville.

Skip Galusha, third Sarah Koltun, second Brittany Tan and lead Shona Barbour went 6-1 over the four-day event including wins over Danielle Inglis in the quarter-final, Jestyn Murphy in the semi-final and Mary-Anne Arsenault in the championship game.

It has been a grind here in Kemptville, but we managed to have 3 great games in a row today and captured the @NGCCFallClassic title! Thanks to our amazing hosts Fran and Doug and all the organizers for an awesome event!! #champs 🏆 pic.twitter.com/MBoWNiM14Q

Sweden's Team Isabella Wrana, a young squad who has already won two events this season, fell in the semis to Team Arsenault.

A pair of Saskatchewan-based rinks squared off in the Dekalb Superspiel final from Manitoba on Monday as Regina's Team Matt Dunstone edged Saskatoon's Kirk Muyres, 5-4, for their second event victory of the season.

Two-time Canadian junior champ Dunstone, who is skipping a new rink this season, went a perfect 7-0 including wins over Team Jason Gunnlaugson in the preliminary round and Team Braden Calvert in the semis. Former second for Mike McEwen's old squad, Matt Wozniak, spared for Team Dunstone at the event.

Pulled off 7 straight wins to take home the @DekalbSS tonight against Team Muyres! Huge thanks to the town of Morris for having us and super spare Matty Wozniak for playing with us this weekend. Back on the ice tomorrow in Thunder Bay at the @grandslamcurl ! pic.twitter.com/TmbuELtzMA

Other team competing in Morris included Steffen Walstad, who lost to Muyres in the quarters, and Charley Thomas who failed to make the playoff round.

Allison Flaxey's new-look Winnipeg-based rink of third Kate Cameron, second Taylor McDonald and lead Raunora Westcott won their first event as a foursome at the Dekalb Superspiel on the women's side.

They dropped just one game in the preliminary round before topping Kristy Watling in the quarters, Amber Holland in the semis and Jennifer Clark-Rouire in the championship tilt.

Jim Cotter added former Saskatchewan skip Steve Laycock to his squad as a third over the summer and the new foursome has their first event victory.

Team Cotter lost their first game of the week at the Kelowna Double Cash, but would reel off six straight, including victories over Sean Geall in the semis and two-time Canadian junior champion Tyler Tardi in the final.

There's a good chance we will see Cotter and Tardi square off again in the BC provincial final later this season with a spot to the Brier on the line.

On the women's side, 23-year-old skipper Corryn Brown and her British Columbia squad won their second event of the season after posting an impressive 6-0 record. They beat Alyssa Kyllo in the final.

Nova Scotia's Jamie Murphy has qualified for the past three national championships and is on the right path for a fourth after winning this weekend in his home province.

Team Murphy went a perfect 6-0 over the four-day event.

On the women's side of the draw, Team Jill Brothers was the last rink standing after beating Veronica Smith in the final.