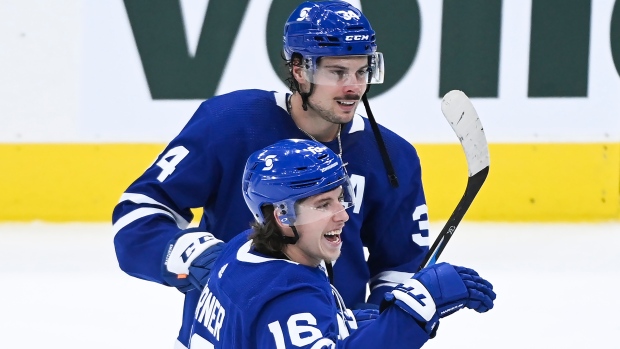 In many ways, the 2020-21 National Hockey League regular season has been a story about the haves and the have nots. The North Division is a great example of this – plenty of competition in the middle of the pack, but ultimately a runaway champion in the form of the Toronto Maple Leafs, parlaying a +42 goal differential to a divisional title.

If you are a Maple Leafs fan, you are feeling rather comfortable right now. Though the Edmonton Oilers remain a threat thanks to their considerable star power, and the Winnipeg Jets present the danger of a possible goaltender heater, the reality is Toronto should be able to navigate through the first two rounds of the playoffs. Anything less than that would be a considerable disappointment.

I’m not one to put the cart before the horse – I thought Edmonton had a chance to dethrone the Leafs, and I still think there is upset potential there with the way Connor McDavid and Leon Draisaitl are playing. But what awaits Toronto, if they get through the North Division, is going to be a challenge unlike any other.

Consider team performance, all situations, since the beginning of the Real Time Scoring System era (2007-08). It is not lost on me that five – five! – of the 20 best teams by net goal differential have manifested themselves this season. And it’s not just a white-hot run of puck luck on both ends of the ice. By expected goals, it’s five of the best 14 teams. 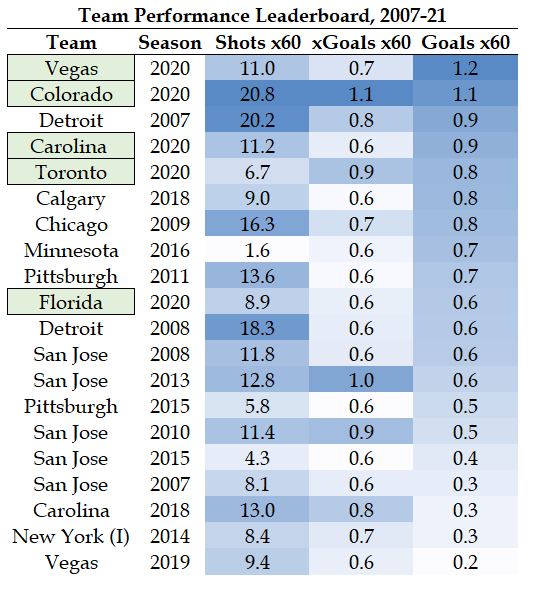 There are some great teams on this leaderboard – another reminder, perhaps, that the San Jose Sharks of yesteryear should have won a Stanley Cup – and Toronto is absolutely a part of that. But one thing that is eminently noticeable is that all of the 2020 teams, sans Toronto, have had another Stanley Cup contender in their division.

If you think that traveling a tougher road builds preparation for the difficulties of playoff hockey, the advantage may go to one of the teams in the West or Central.

In the West Division, we are being set up for a possible all-time second-round matchup between Vegas and Colorado, perhaps the two best teams we have seen in the modern era of hockey. In the Central, the Florida-Carolina-Tampa Bay triumvirate will ensure this postseason is nothing less than a knife fight. In many ways, the Nashville Predators are this year’s ultimate underdog story.

One of the areas I expect Toronto to meet more resistance – again, assuming they can survive the North Division in the first two rounds – is at even strength. The Maple Leafs have absolutely pummelled the competition there, outscoring their North Division opponents by 39 goals. Winnipeg (+8) and Edmonton (+1) were exceptionally middle-of-the-pack.

Or, said another way, the antithesis of the teams that await them deeper in the playoffs.

Toronto still looks fantastic by these measures, but you can see how the competition outside of the North Division rises rather significantly. Vegas actually had a better net goal differential at even strength over the course of the season, Colorado exhibited an unparalleled level of puck dominance and shot volume, and all three of the Central Division teams were comparable or stronger on the defensive end of the ice.

In many ways, these clubs look like a deeper version of Edmonton. The Oilers have the best star power in the league, the type of talent that can utterly overwhelm opponents over the course of a game or a series. The Maple Leafs – spearheaded by Auston Matthews – have that, too. But a common theme across the top-tier teams of the 2020-21 season is that they have an elite line and talent behind it. Every one of these teams dresses at least three highly capable lines, and in some cases four.

If nothing else, I think we are set up for one of the most exciting postseasons in recent memory. There are a handful of teams that have emerged as bona fide Stanley Cup contenders, and without cross-divisional play, we are flying a little bit blind as it pertains to understanding a team’s true talent level.

But if you buy what we have seen over the course of this regular season, Toronto – and just about every other team near the top of the NHL hierarchy this season – is going to meet impeccably stiff resistance on their way to a championship.