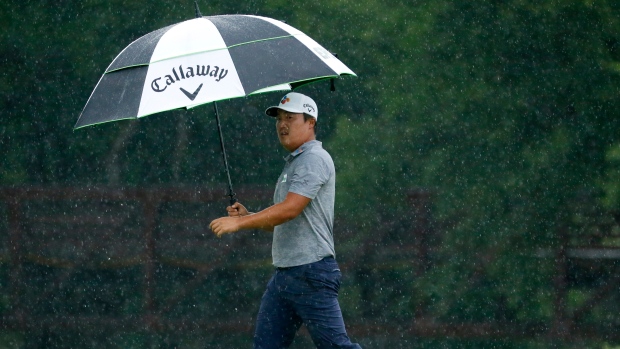 McKINNEY, Texas (AP) — The AT&T Byron Nelson is in a final-round weather delay with K.H. Lee leading by three shots and three holes from qualifying for next week's PGA Championship.

The players had been slogging through a steady downpour for about an hour when a lightning strike forced the delay Sunday at TPC Craig Ranch. The new home of the Nelson is the third different course in the past four events.

The leaders started several hours early to try to get in the round with increasing rain in the forecast. The leaders got through most of the front nine before the heavier rain arrived.

The players were already able to lift, clean and place their shots in the fairway before rain inundated the fairways and greens over the final holes. Workers used squeeges to clear the paths of putts, and one ball was sitting in the middle of a fast-moving stream in the fairway on No. 18.

Lee is at 24 under with third-round leader and playing partner Sam Burns, Patton Kizzire and Daniel Berger three shots back. Kizzire (63) and Berger (64) had already finished.

Jordan Spieth is on the verge of falling short again in his hometown tournament. Spieth started the day tied for third, three shots behind Burns, but couldn't keep the momentum going after consecutive birdies at Nos. 5 and 6. The conditions made it tough for anybody to make a move later.

Lee is looking for his first PGA Tour victory, which would qualify him for next week's PGA Championship on the Ocean Course at Kiawah Island in South Carolina. The 29-year-old from South Korea has played in two majors, missing the cut at the U.S. Open twice.