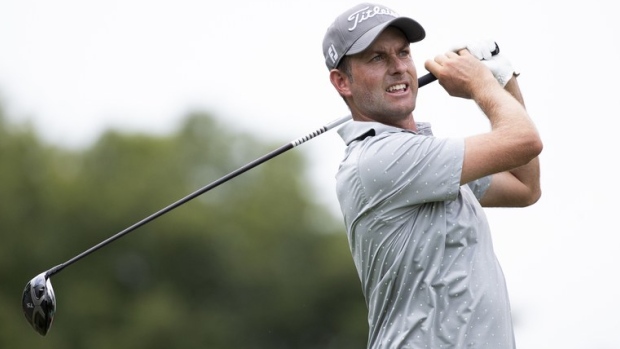 Any way you look at it, Webb Simpson is playing some very good golf these days. In fact, a case could be made easily that he’s playing the best golf of anyone at the moment.

Yet, his name is not heard as loudly when talk turns to the best or when major championship office pools are handed in. That’s usually reserved for the likes of Rory McIlroy or Dustin Johnson or Brooks Koepka. All greats, all deserving of praise. But Simpson, who is set to tee it up at this week’s Rocket Mortgage Classic in Detroit, Mi., should be included in that list too.

Consider the numbers. He sits atop the FedEx Cup points list and is fifth in the Official World Golf Ranking. He leads the PGA Tour in scoring average with a mark of 68.662 and is fourth in Strokes Gained: Total, a compilation of all the Strokes Gained categories.

In seven starts this season, he’s logged two wins, a second and a third, earning himself just over $4 million. And in his previous 38 tournaments, he’s missed the cut just twice.

He is quite simply playing some exceptional golf. When asked if his talent was getting enough attention, Simpson wasn’t worried about notoriety.

"As much as I respect the journalists and media, I don't pay a whole lot of attention to it just because I feel like I'm very busy at what I'm trying to accomplish," said Simpson, "so I don't read a whole lot of articles or the buzz or what's going on.

"If they want to give me credit, great. If not, it's all right, too, because I've got to worry about me."

To see the words in print might give the impression he’s trying to take the high road and avoid an answer. But there is not a drop of malice in his statement, no chip on his shoulder as there once was on Koepka’s when he felt short-changed by the media.

Simpson is as humble as they come on the PGA Tour. He is quick to offer praise to others. He smiles a lot, remembers people’s names, and listens to others when they talk. He’s hard not to like and to cheer for.

He’s also a devoted family man, with five kids at home. Last week, his daughter had a sore throat and was tested for COVID-19, which came back positive. A subsequent test on her, his four other children and wife Dowd, all returned negative. It’s Simpson’s contention that the initial test was a false positive, but out of precaution, he withdrew from last week’s event.

A week later he’s back and looking to continue his fine play. He’s also feeling confident about the state of the PGA Tour as it plays on through the pandemic.

So far just eight players and two caddies have brought back positive tests out of more than 3,000 administered. There’s also been no spread at any of the first few tournament sites.

"I mentioned to the commissioner last week that based on our numbers, our stats, I told him the safest place anyone can be in the United States right now is on the PGA Tour," Simpson said.

While those results are impressive, he understands that the tour is still just one outbreak away from being shut down for a second time. The 34-year-old has tightened things up at his home, admitting he might not have been as attentive to protocols as he should. There’s no more backyard visits or friends over for workouts.

On the road, he’s done the same, sticking to his hotel and room service, and wearing his mask more than in past weeks.

"I think guys are so aware of how easy it is to catch this disease that I think everyone else is becoming more strict," he said. "That first week at Colonial there were still fist bumps after the round, closer contact I think on the range or player dining. There's way less of that now. Now, nobody's touching; maybe an elbow here or there. I'm definitely seeing how it's affecting everyone, not just those who have had contact with someone."

Simpson, almost more than any golfer, wants the tour to keep playing. With his game at such a high level, it would be a shame to have to pause it again.