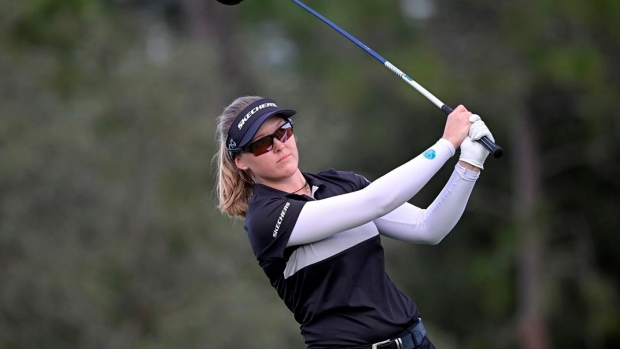 In six appearances, her average finish is 42nd and in 22 rounds, she’s only managed to return a scorecard in the 60s three times. No surprise then that she’s listed at +3300 on betting sites.

But all of that can be washed away with a good week at Carnoustie, site of this year’s championship. It’s another opportunity for her to take on a links course. As with many North American players, Henderson has taken some time to figure out how to adapt to the different style of play required.

“I feel like every year I go over and play links courses, I learn a little bit more and feel a little bit more experienced,” she said before last year’s Open, “and just more [being] comfortable I think is the key thing.”

This would be a good year for a big performance. The prize money has taken a significant jump forward, increasing to $5.8 million (U.S.) with the winner receiving $870,000. It’s the richest prize pool in women’s golf and next year it will jump again, going to $6.8 million.

Henderson has already had a decent season by most standards. She notched her 10th LPGA Tour victory at the HUGEL-AIR Premia Los Angeles Open, has recorded five top-10 finishes and has been inside the top 25 in the four previous majors. But since a tie for seventh at the U.S. Women’s Open, she’s logged a withdrawal due to illness, a missed cut and four mediocre finishes. She also played in the Olympics in Tokyo where she ended up tied for 29th.

Exhaustion could be one factor in her performance. When she flies home from this week’s Open Championship, it will wrap up a five-week period in which she travelled more than 51,000 kilometres. She’s visited more airports than golf courses in the past month, travelling between Europe, Asia and North America.

One place she hasn’t ventured for some time is Canada. With the borders closed and quarantines in place until recently, it’s been difficult to venture home. That not only means no time with the family back in Smiths Falls, Ont., but also no face-to-face time with her coach who also happens to be her father. It’s been all virtual learning for the past year.

For the most part, most of her game remains strong. She is in the top 10 in driving distance and sits third in greens in regulation. Her scoring average is 70.06, which has her in ninth spot. Henderson has an annual goal of trying to keep it under 70.

The not-so-good part of her game is well known to her fans – putting. She fully admits that it is her Achilles heel, and she knows that her final score on any day is often determined by how she putts. She is 125th in putting average and 62nd in putts per greens in regulation. In the first round of the Olympics, she lost 5.8 strokes to the field in putting, which had her in last spot among the 60 players.

Henderson works hard at improving her putting, mostly under the watchful eye of her sister, Brittany, well known as a caddie but also a fine golf professional in her own right. They’ve spent a lot of time trying to improve reading the greens this past year to give her a fighting chance to get the ball on line.

To be fair, Brooke Henderson is not a poor putter. She is more of a streaky putter, who can get hot on the greens at times. The slower speeds of the greens on the links courses used at the Open have helped her in the past. In the 2019 and 2018 editions, she ranked tied for 22nd and tied for 12th in putting.

To win at Carnoustie, however, she’ll need all facets of her game to shine. It is arguably the toughest test of all the Open Championship sites. Henderson will tee off at 7:49 ET alongside Yuka Saso and Lexi Thompson. The same trio played together for the first two rounds of the Olympics.