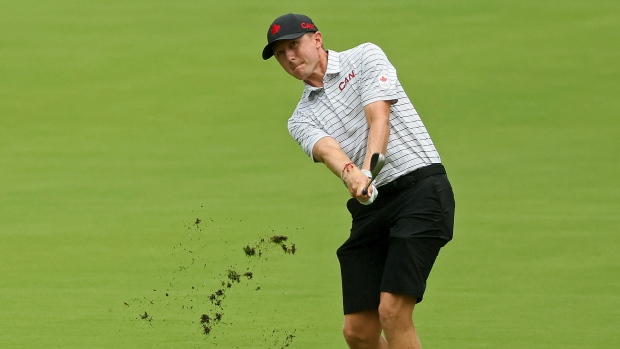 Mackenzie Hughes and Corey Conners have a lot in common.

Both grew up playing golf in southwestern Ontario. Both attended Kent State University. Both were on the Canadian National team and both are currently on hot streaks on the PGA Tour.

But when it comes to the Olympics, they do have one significant difference. When each was asked what other Olympic sport they’d like to participate in other than golf, the answers were about as far apart as you can get.

“Bobsled seems kind of cool,” said Hughes from behind his mask at the press conference on Tuesday. “I don't know. “But it also seems super scary going down an ice tube at 120 miles an hour.”

“I was a pretty good badminton player,” stated Conners, “but was realistic enough to know when I watched the Olympic badminton players play that I had a lot of work to do to try and get there, so I knew that wasn't really a possibility.”

Bobsleigh and badminton. The opposite ends of the Olympic spectrum have been reached.

Thankfully, neither one will be pushing a sled or smashing a shuttlecock this week. Instead they’ll be taking on Kasumigaseki Country Club’s East course as golf makes its second appearance at the Olympics after a 112-year absence. And both Canadians are legitimate medal shots, coming in off solid performances at the Open Championship where they were in contention heading into the final round.

“Really excited to be here with Mac, close friend,” said Conners. “I think we're both playing really well heading here coming into this week and I like our chances to get on the podium and look forward to having a good week.”

Being in Tokyo for the Games was a goal for both players almost as soon at the 2016 edition ended. In the ensuing five years, their games have soared with Conners ranked 35th in the world and Hughes sitting at 53rd. They’ve each won once on the Tour and added a healthy number of top-10s with career earnings in excess of $7 million.

But this week is not a usual one. They aren’t just playing as Canadians, as they do on the PGA Tour; they’re playing for Canada.

“I think it's a bit different in that sense,” Hughes observed. “We are here competing for hardware for our country, basically, and that's not like week-in and week-out on the PGA Tour where you play for FedEx Cup points and money and this week it's not about any of that.”

To reach the podium, the Canadians will sacrifice some of what is regarded as tradition among Olympic athletes. Instead of staying in the Olympic Village, they are bunked in at a hotel closer to the golf course. Rather than a 90-minute trip to the course, they are just a short car ride away.

The benefit to that is it allowed them to bring their wives along, who are signed on as, ahem, personal coaches, with instruction being provided during the practice rounds.

“There's lots of on-course instruction out there,” joked Hughes of his bride, Jenna. “I know that my wife only expects the ball to go in the hole from anywhere on the golf course. So, it doesn't matter where I am, it needs to go in the hole or it's not up to par. So, I'm working on it. Working on being perfect out there.”

Thankfully, most of the coaching duties have fallen to Derek Ingram, who runs Golf Canada’s national team. He has worked with both players during their time in the program and has continued to coach Conners since he turned pro.

Ingram has put together the plan for the Canadian team, including making a scouting trip to Kasumigaseki two years ago where he mapped out the course. He’ll also be passing on his information to the women’s side, giving the intel to Brooke Henderson and Alena Sharp when they tackle the same course next week.

So far, the layout, which was built in 1929 and overhauled by Tom Fazio in 2014, has been given a thumbs up by the Canadian golfers.

“Golf course is amazing,” said Hughes. “Really like the way it looks. And the golf course is in the best shape you could ever have because they have not had a round of golf here since May 1 is what I was told. So, hard to find many divots out there and the greens are perfect.”

Compared to other sports taking place around Tokyo, golf is somewhat of an anomaly in that there are no definitive favourites or athletes expected to win a medal. There are probably 40 golfers who could stand on the top step of the podium on Sunday and not create a ripple of surprise. The two Canadians are clearly in that group.

“Golf is a different sport,” Conners stated. “A lot of people playing for those medals, and I think some days you have it, some days you don’t. Anyone can have a good week at any time. Hopefully both of us can have a really great week this week and we'll be up there.”