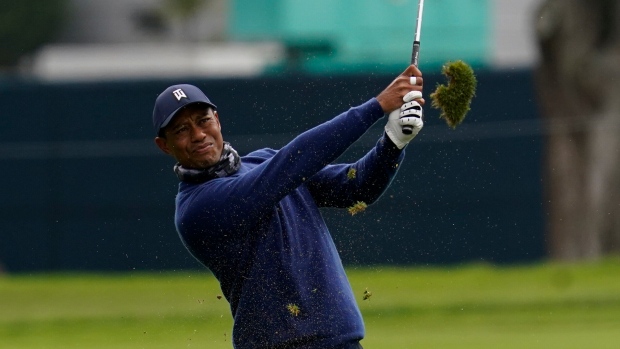 There were no back problems and no rust as Tiger Woods started his PGA Championship with a first round of 2-under 68.

The 15-time major champion swung without restriction and used a new putter to his advantage as he battled Thursday’s cool conditions at TPC Harding Park.

"I felt like I kept the round going most of the day," said Woods, "and I let a couple go here and there, but for the better part of the day, it was a very solid round."

Starting on the back nine, Woods birdied two of his first four holes, draining a 32-foot putt on the 13th hole. After a poor wedge shot, he dropped a lengthy 20-foot putt on the 18th to save par, making the turn in one under.

His second nine included birdies on the fourth, fifth and seventh holes, sandwiched between a couple of bogeys that left him in the house.

For much of the day, Woods took full lashes with his driver without any sign of back problems. He did send eight of his tee shots into the left rough, chalking that up to hitting his driver off the toe. But in most cases, his misses left him in decent spots on the right side of the hole.

But it was the putter that seemed to be his strongest club. The club is a new one for this week, replacing his trusty one that he’s used to win 14 of 15 majors. The new model looks similar to the old one but is longer, taking the pressure off his back.

"You know, it's difficult for me to bend over at times, and so practising putting, I don't spend the hours I used to," Woods admitted. "Wasn't unusual for me to spend four, five, six hours putting, per day. I certainly can't log that with my back being fused."

Overall, his day was solid if not spectacular. Considering the temperatures hovered around 14C when he teed off and that he’s played four competitive rounds since last February, he was pleased with the performance.

"I felt like if I shot something in the red, I would be right there because the conditions were going to be tough this afternoon for the guys," he stated.

Two-time defending champion Brooks Koepka continued his good play from last week where he tied for second, using a consistent game off the tee and into the greens to set up a 4-under 66.

"We had a lot of good numbers today, which always helps," said Koepka of his iron play that allowed him to hit 14 of 18 greens. "But struck it really well, put it in the right spots. Felt like I had a good uphill look most of the time, and that's what you need to do out here. You've got to drive it in play, and I felt like I did that. I was pleased with it overall, everything."

Koepka is trying to become the first player in almost 100 years to win three consecutive PGA Championship titles. As he did in his last two wins, he appeared calm for most of the day. He has worked on a program that allows him to stay at ease leading up to the four biggest tournaments of the year.

"I think sometimes guys can not over-prepare, but just practice a little too much," he stated. "If you're going to be here until Sunday it's pretty mentally draining. Physically, it's fine, but mentally I'm done after four days of this."

The Canadian contingent was led by Adam Hadwin, who began his major championship by holing his second shot on the first hole for an eagle two.

"Couldn't have asked for a better start," said Hadwin. "Great drive in the fairway. Certainly wasn't trying to hole it, I guess. Just hit a wedge in there close and it couple-hopped-and-in. That's an easy way to settle the nerves, for sure."

Hadwin came into the PGA Championship after his worst performance since the restart, a tie for 76th at the World Golf Championship FedEx St. Jude Invitational. He called his putting, usually one of his strengths, "embarrassing" and admitted he wasn’t sure what to expect.

But his play on Thursday was consistent and smart, and he got through a small stumble down the stretch, with a bounce-back birdie on the 16th after his first bogey of the day a hole before. He also had to scramble for a bogey on the final hole after hitting a poor second shot into deep cabbage next to the green.

"The 18th was a bit of a mess, to be honest," admitted Hadwin, who finished with a 2-under 68. "Really had no business getting anywhere close to that hazard but it was a terrible second shot."

Corey Conners was at 1 under par, getting around the course with three birdies against a pair of bogeys.

"It wasn’t anything special," said Conners. "I just kept myself in position and I hit a lot of greens which makes things easy. I would like to hit some of my iron shots a little bit closer to the pins but for the most part it was solid."

Mackenzie Hughes posted a 3-over 73 while Nick Taylor struggled to 6-over 76.