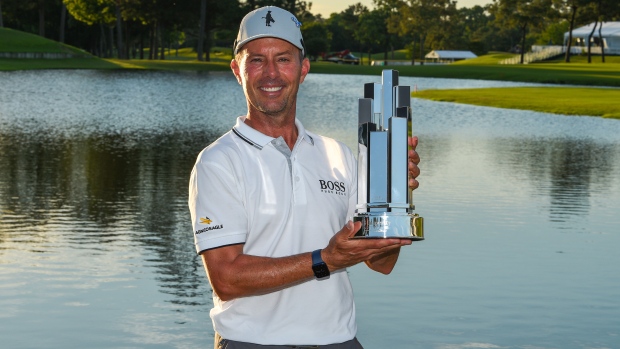 It took him 13 years, but Mike Weir finally got back to the winner’s circle.

Weir survived a long day on the course and a battle with John Daly to capture the Insperity Invitational, his first win on PGA Tour Champions.

“It wasn’t easy today,” said Weir, who fired a final-round 68 for a two-shot victory. “I hit a lot of really good shots. I had a couple of stumbles but I just tried to stay with it. I knew I was playing well and I told myself to just keep sticking with it.”

After Friday’s round was washed out due to heavy rains, the tournament was reduced to 36 holes. Weir managed to play 13 holes of his first round on Saturday before darkness fell and then returned early Sunday to finish things off for a round of 66.

He was one off the lead to start the final round and got out quickly with birdies on two of his first three holes to earn a share of top spot with Daly. Tim Petrovic and David Toms, playing alongside Weir in the final group, also battled, but for most of the afternoon, it was Weir and Daly trading good shots with missed opportunities.

In one stretch starting at the 11th, Weir went birdie-bogey-eagle-bogey-birdie. Still, he remained on top, tied with Daly. Playing one group ahead of the Canadian, it was Daly who finally yielded, hitting his approach on the 18th hole into the water leading to a double-bogey six. He, Petrovic and Toms ended up tied for second.

“Coming to 18, I knew what was happening,” admitted Weir. “I hit a really good drive. I didn’t know John had hit it in the water when I hit my tee shot, but I knew once I walked up there. Billy Ray Brown (Golf Channel analyst) said he’d made a six. I knew I needed to hit a nice golf shot. I put the ball back in my stance and hit it with an eight iron and hit it 20 feet from the hole. So it was good to finish like that, hit some quality shots coming in and hit the targets I was looking at.”

When the ball landed on the final green, a tight fist pump from the 50-year-old Canadian finally released the emotion he’d kept at bay throughout the day.

That release was about more than just that shot or the victory. It was about a long, grinding return to the top spot. Weir’s last win came at the 2007 Frys on the PGA Tour. At the time, it seemed almost certain there would be more to come but he injured his elbow on a tree root at the 2010 Heritage and his game spiraled out of control.

There were surgeries and more injuries, and a series of instructors who tried to patch him up.  But the golfer once ranked as high as third in the world lost his way. From the time of the injury through the end of the 2014 season, Weir missed 60 cuts in 87 starts. That brought on waves of self-doubt and his game spiraled into a dark place.

“Four or five years ago, I couldn’t find a fairway, I couldn’t hit a solid iron shot, I couldn’t make a putt,” he admitted. “I mean I was really, really struggling. I put a really good team together, I got really focused and it really good to climb back out of there.”

And Weir never lost hope. Even though he played tournament after tournament, and missed cut after cut, he kept telling all who would listen that he would return to form, that he was on the right path.

His team of coach Mark Blackburn, sports psychologist Rich Gordin and strength coach Jason Glass also believed and helped revive his game and in many ways made him whole again.

The biggest addition to his life is undoubtedly his partner, Michelle Money, who has served as his biggest supporter and fan for the past five years. Weir gave her plenty of praise after the win, in many ways for encouraging him to be less intense and to enjoy all that he has in his life. It was a more relaxed Weir who lifted the trophy after getting his first win in more than a decade.

“This win means a great deal,” said Weir, who turns 51 on May 12.“I think when I look back, this will be very, very memorable.”

He becomes the fourth Canadian to win on the Champions Tour joining Dave Barr, Rod Spittle and Stephen Ames.