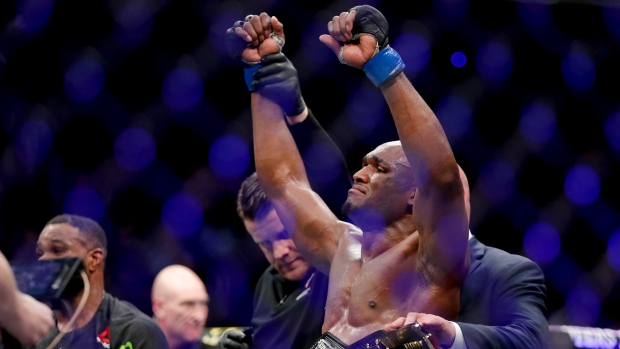 This Saturday, UFC welterweight champion Kamaru Usman will step into the octagon for his first title defence since winning the championship this past March.

The 32-year old has dominated the competition from the moment he stepped into the promotion, having won 10 straight fights, but it wasn’t long ago that he was thinking about walking away from the sport all together.

Usman cited a long period of inactivity in late 2017 fuelled by other fighters refusing to accept bouts against him.

“There were moments in the UFC where I thought about quitting fighting because there were moments where I couldn't get a fight,” said Usman, in an interview with TSN’s Aaron Bronsteter. “I was very close. I went six or seven months of just sitting there trying to get somebody to fight.

On the cusp of breaking into the ranks of the top 10, “The Nigerian Nightmare” says the upper echelon of the division refused to accept fights with him and the organization showed no urgency in fast-tracking the process.

“Everyone made up a different excuse. ‘He needs to beat someone in the top 10 first. He's not a good fighter or he's boring.’ No one wanted to let me in the party,” said Usman. “The organization was not necessarily taking the steps and the efforts to get these guys to fight me.

“They knew what would happen, that I would be the welterweight champion of the world. Which is what I am right now.”

Usman finally found a willing opponent in former title-challenger Demian Maia in May of 2018 and easily dispatched the veteran via unanimous decision.

Having showcased his skills against one of the division’s best, the Ultimate Fighter 21 winner could no longer be ignored and defeated Tyron Woodley 10 months later to earn his first UFC Title.

As the Nigerian-born champion prepares to headline this weekend’s UFC 245 event against interim welterweight champion Colby Covington, Usman recalled the role that his opponent played in him nearly leaving his mixed martial arts career.

“Part of [the frustration] was my opponent that I'm fighting. He was offered to me several times, four times to be exact, and he's turned them all down,” said Usman.

With the bout finally booked, Usman admits that, despite his differences with his opponent, fans will be seeing two of the welterweight division’s top talents.

"Both guys are 15-1. How crazy is it that his lone loss was to a guy that I completely dominated and my lone loss is a guy that he beat,” said Usman. “I don't think that's ever happened."

The outspoken Covington has ramped up his usual trash talk in advance of Saturday’s bout, going as far as insulting Usman’s Nigerian heritage leading up to the fight.

Covington’s controversial actions have made him one of the most polarizing figures in MMA. While his persona has drawn some attention, good and bad, to his fights, Usman criticized his opponent’s “character” as being a way out, following years of divisive antics.

“He's not going to get away with this. He's trying to find a way out right now. These are all excuses.” said Usman. “Don't put that character on. Be the guy. You became this character and went fully into it. You have no respect for anybody, any culture, any gender, or anything, so be that guy.”

The welterweight champion pulled no punches on his opponent’s character and gave Covington no excuses as he attempts to become the undisputed champion on Dec. 14 in Las Vegas.

"You have your own mind and your own sense, you chose to do that. You’re a grown man,” said Usman.

“Don't come out and say you're putting on a character because you don't want everyone to hate you after I sleep you this weekend.”