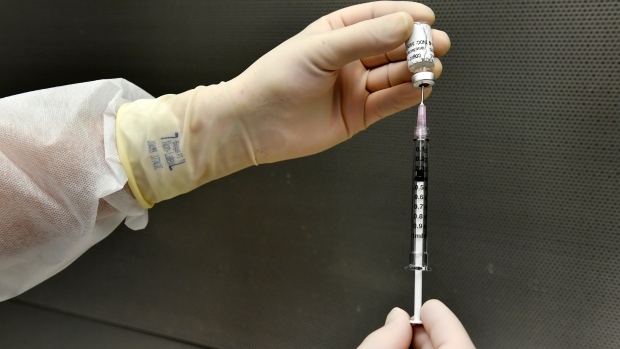 Would seeing and hearing from prominent sports stars who agree to be inoculated help convince Canadians who are hesitant about the prospect?

Some infectious diseases and medical ethics experts are intrigued by the idea that pro athletes and other well-known artists and influencers might have a role to play in helping overcome resistance to a COVID-19 vaccine, and that it’s worth debating whether some celebrity sports figures should be given priority for vaccinations.

“We need positive role modeling behaviour to help with vaccine uptake in the community, and vaccination of high-profile people will certainly help, including celebrities, artists, athletes, community leaders,” Toronto infectious diseases specialist Dr. Isaac Bogoch wrote in an email to TSN on Wednesday.

“While that list could certainly include some professional athletes (as so many people look up to them), it does not mean that all professional athletes should be prioritized. Vaccination programs should start with those most likely to acquire and/or have severe COVID-19 outcomes, and programs should be driven through an evidence and equity lens.”

How to decide whether pro athletes might make good vaccine role models?

Dr. Bogoch, who advised the NHLPA this summer on the NHL’s return to play this summer and is now a member of the Ontario government’s COVID-19 Vaccine Distribution Task Force, declined to say, calling that decision a “value judgment.”

“I'll stick with the data and let others sort that out,” he wrote. “But it could be any high-profile person who others will look to for guidance, and that may be different for different age groups and cultures.”

In October, a study published in the medical journal Nature Medicine reported that 28 per cent of 13,400 people surveyed in Canada and 18 other countries said that they would either refuse to be inoculated or would hesitate.

Researchers in the study asked respondents, “If a COVID-19 vaccine is proven safe and effective and is available, I will take it.” In China, 88.6 per cent of those surveyed agreed with that statement, compared to 75.4 per cent in the U.S., 71.5 per cent in Britain, 68.7 per cent in Canada, and 54.9 per cent in Russia.

There is history of governments using well-known personalities in public health campaigns. In 1976, U.S. President Gerald Ford and his family were given inoculations on TV during a vaccination campaign, and in the 1950s, Queen Elizabeth announced that her children had been vaccinated for polio, said Dr. Juliet Guichon, a University of Calgary professor and medical ethics expert.

“The Queen had tremendous public affection and she breached the privacy of her children’s health information, giving that news to the public,” Dr. Guichon said in a phone interview. “The difficulty with pro athletes is that they have a lot of respect and affection among a portion of the population, but not all of the population.”

The Canadian government approved Pfizer’s two-dose COVID-19 vaccine for use on Wednesday and has said that the elderly and clients and staff of long-term care facilities would receive the vaccine first. Healthy adult Canadians may begin receiving vaccinations in April.

“You could easily wind up with the public perception being that athletes are queue-jumping and that’s happened before,” she said.
In 2009, when vaccines for the swine flu were made available, the public in Calgary were told to wait in lineups for hours at a time outside Alberta Health Services offices. While requests to set up private vaccination clinics in seniors homes were denied, 150 Calgary Flames staff, players and their family members were given priority, secretly vaccinated before many members of the public at their NHL arena, a provincial inquiry reported.

“If I was advising. I’d say wait for the most vulnerable to get the vaccine and then wait for a signal that the average joe just won’t do it because they are afraid,” she said. “You’d get that sense in media interviews, from moms in schoolyards with their hands on their child’s shoulders saying, ‘No way are we getting the vaccine.’ Maybe at that point you make plans for some high-profile athletes.”

Dr. Barry Pakes, Program Director in Public Health and Preventive Medicine at the University of Toronto, said he expects the major professional sports leagues have already started attempts to secure supplies of COVID-19 vaccines. The NBA secured COVID-19 tests well before they were available to the public last spring.

“I think the leagues would try to message that by saying they are leading by example, and that the players have to travel through North America, that having the games on are good for people’s mental health, and that we’re only talking about a few thousand doses of vaccine, a very small amount out of a large amount that’s being produced,” Pakes said in an interview on Wednesday.

The NHL, NBA and Major League Baseball did not respond to requests for comment about whether the leagues were trying to buy doses of a COVID-19 vaccine privately.

NFL spokesperson Brian McCarthy declined to say whether the NFL has explored purchasing a private supply of COVID-19 vaccine.

“We have not sought any exemptions or special treatment that would hinder the care for the public or put anyone at risk,” McCarthy wrote in a Nov. 25 email. “That will continue with the future. We will continue to follow the guidance from public health experts as we have been throughout this year.”

Andre Gagnon, a spokesman for the Public Health Agency of Canada, wrote in an email to TSN on Thursday that the federal government cannot prevent pharmaceutical companies from selling vaccines.

“The government of Canada does not have control over a vaccine manufacturer interacting with a private enterprise,” Gagnon wrote.

Dr. Mike Silverman, an infectious disease specialist at Western University in London, Ont., told TSN in an interview on Wednesday that giving vaccines to pro athletes might have both benefits and drawbacks.

“It could help use but it could also confirm inequalities and the idea that the rich and well-connected get to the front of the line,” he said. “Older ex-athletes would be better as they need it for their own use. Then give it to the current athletes when it is time for the general population and make a big thing about them at that time.”