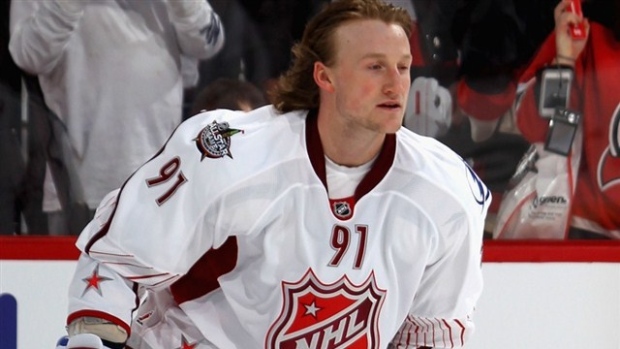 The NHL has once again said no - for the time being - to selling prime space on team jerseys to sponsors, a move the league estimates would generate at least $120 million.

During a recent meeting of NHL team presidents in New York, league officials estimated they might raise $4 million per team by allowing corporate sponsors to put their logos front and centre on jerseys, a person familiar with the matter told TSN.

"Gary (Bettman) and owners like the money, but they don't want to be first out of the box with this in North America," the person told TSN. "They'll wait for the NBA or baseball to do it and then be second or third."

The NHL, like other mainstream North American sports, to this point has resisted breaking with tradition, even though NHL jerseys already carry advertising since jersey maker Reebok's logo is so prominent.

Major League Baseball may have been the first major North American sports league to consider the money-generating move. In 1999, MLB considered putting logos on the sleeves of player uniforms, but commissioner Bud Selig said no.

As recently as 2012, the NBA made up mock Boston Celtics and Chicago Bulls jerseys with sponsor logos in place of the 'Celtics' and 'Bulls' names on the front. The NBA ultimately decided against the move.

Sports marketing experts say a corporate presence on NHL jerseys is inevitable. Traditions change, after all. The NBA abandoned short shorts and the NHL, too, has tinkered with its uniforms through the years, at times allowing teams to wear white skates and long hockey pants called Cooperalls that ran from the waists of players to their ankles.

"The AHL added patched in the late 1980s and it really wasn't a big deal," said Bob Stellick, a former Toronto Maple Leafs marketing official whose clients have included McDonald's and the Royal Bank of Canada. "Look at English soccer or TFC. They ask people to purchase jerseys with a huge BMO logo and it doesn't seem to be a deterrent."

"It's inevitable but will be perceived as a sell out and weakness by the first North American league to do so," said Brian Cooper, president of S&E Sponsorship Group. "Even though English Premier League, Nascar and Euro hockey have done it. It's the blatant commercialization of sport. It's almost too close to the heart of sport."

During the meeting of NHL team presidents, NHL executive John Collins, who has fostered the league's popular outdoor games, discussed plans to use technology to sell rink board ads in a different way. The so-called 'erase and replace' rink boards feature ads that can be replaced on TV, meaning the NHL can sell region-specific ads to advertisers. An NHL final could feature rink boards with Swedish ads for viewers in Stockholm, or Cyrillic ads for those in Russia.

The Philadelphia Flyers discussed the possibility of adding more ads on the ice surface, and league officials discussed ways to generate more revenue from jersey sales, which have been relatively flat in recent years. Reebok's jersey contract with the NHL expires in 2016, and companies including Bauer and Under Armour are expected to pursue a new deal with the NHL, several sources told TSN.

The team presidents also heard from several clubs including the New York Rangers who are planning to use jerseys this year that have computer chips built in. The chips will allow teams to more accurately track a player's speed and movements on the ice for use in advanced statistical analysis.

Some NHL players have reconciled the prospect of ads on jerseys.

"When you can add additional revenue, it creates options," said Ritch Winter, an Edmonton player agent who worked on the goalies' efforts. "It doesn't have to start with ads on every jersey. Maybe you have a third jersey or maybe ads are just on goalie jerseys. What's wrong with a new tradition? The majority of immigrants to North America come from Europe and Africa and Asia, where they are used to seeing ads on jerseys. Is Manchester United's jersey any less popular around the world than the New York Yankees' jersey?"

Cooper and other marketers said the money may be too rich for the NHL to resist for long.

In the English Premier League, teams are expected this season to reap a collective $341 million worth of jersey sponsorships, the London Independent newspaper reported. In a new deal with Chevrolet, Manchester United will bring in $84 million a season, more than double the $35 million the team got during the previous season from the insurance company Aon.

It's worth noting that soccer uniforms haven't always been emblazoned with ads.

In 1976, a soccer team in Kettering, England, became the first in British soccer to compete in a game with a sponsor's logo, 'Kettering Tyres,' on their jerseys. Britain's Football Association demanded the corporate logo be removed from the team uniform and TV networks refused until 1983 to show teams wearing uniforms with corporate logos.