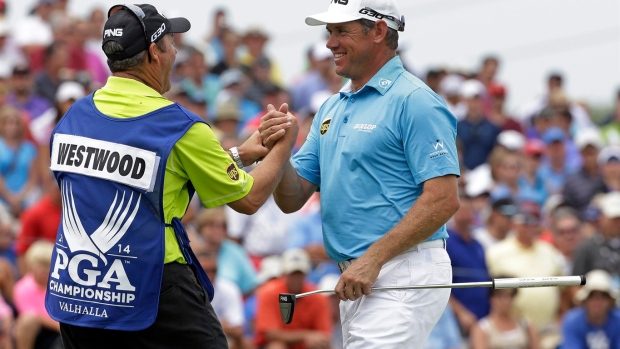 Kuchar used a local caddie at Mayakoba because he entered at the last minute and his regular looper, John Wood, had a previous engagement. Westwood used his girlfriend, Helen Storey, who previously caddied for him in Denmark.

Wood is back to work with Kuchar this week at the Australian Open. Billy Foster's 10-year run with Westwood is done.

"Mine and Billy's working relationship had got to a point where neither of us were gaining anything from it and we weren't doing each other any good," Westwood said Tuesday at the DP World Tour Championship in Dubai. "I sat him down and said, 'This is no good, I'm playing better when you're not there than when you are there, so something's obviously not working.' He said to me, 'Well, I can't caddie for you how I want to caddie for you.'"

Westwood said he has reached a stage in his career where he doesn't need as much from his caddie, and he felt Foster wasn't happy just carrying the bag.

"It just was one of those things that had to come to an end," Westwood said. "We've obviously had a great time the last 10 years and been very successful, but people change and the way you work and look at things."

Foster is working with Matt Fitzpatrick in Dubai. Westwood is using Glen Murray, who was on the bag with Sergio Garcia when the Spaniard won the Masters.

The road to the Masters also will cut a path toward Northern Ireland for the British Open.

With the PGA Championship moving to May, the R&A has changed up the sites and dates of "The Open Qualifying Series," with the biggest change on the PGA Tour. Last year, the three PGA Tour events leading up to The Open offered nine spots to players not already exempt — at two tournaments, four spots from the top 12 on the leaderboard, and one spot at the John Deere Classic.

Europe's schedule has not changed, only the tournaments. Three spots to the leading 10 players will be awarded in each of three tournaments leading to The Open — the Andalucia Valderrama Masters, the Irish Open and the Scottish Open.

A total of 46 qualifying spots are offered around the world for the 156-man field, starting this week at the Australian Open.

Emiliano Grillo rapped a 3-foot bogey putt on the final hole at Mayakoba that popped around the lip and spun out, leaving him stunned. He made double bogey for a 69 that dropped him from a six-way tie for 10th to alone in 15th place.

That was worth $35,400. It cost him nine FedEx Cup points. That happens every week.

This late in the year, it cost the Argentine 0.83 world ranking points. Instead of being at No. 46, Grillo moved up to No. 48. That's important because the top 50 at the end of the year get into the Masters, and he'll have to wait to see if that putt ends up costing him a certain invitation.

Then again, Grillo is playing the Dunlop Phoenix in Japan this week and could make it a moot point.

The Australian Open doesn't have Jordan Spieth for the first time since 2013, though it attracted a strong group of Americans that include Matt Kuchar, Keegan Bradley and Brandt Snedeker. Kuchar is staying in Australia next week for the World Cup of Golf.

Next year, the Australian Open could get even more star power.

Organizers announced Tuesday that it will be held Dec. 5-8, one week before the Presidents Cup at Royal Melbourne.

When the Presidents Cup last was in Australia in 2011, 13 players from the U.S. and International teams competed in golf's fifth-oldest championship. That group included Tiger Woods, who will be the Presidents Cup captain next year.

"This is great news for the Australian Open and we're excited about what this means for Australian golf fans," Golf Australia chief executive Stephen Pitt said.

Golfers with disabilities are getting their own world ranking.

The R&A and the USGA announced Tuesday the World Ranking for Golfers with Disability for men and women, starting in January. The World Amateur Golf Ranking will administer both sites. The governing bodies agreed to take over the program that the European Disabled Golfers Association created in 2014.

"There is an accelerating growth in the number of events around the world for golfers with disabilities to compete in, so it makes absolute sense that there is a global ranking to provide a robust measurement of an individual's skill and ability," said Duncan Weir, head of golf development and amateur events for the R&A. "It is another important step toward ensuring that golf is more inclusive of people of all ages and abilities."

The announcement coincided with the Australian All Abilities Championship, in which 12 golfers are playing alongside pros at the Australian Open this week.

Another week, another golf course for Padraig Harrington.

The RSM Classic at Sea Island is the ninth tournament in 10 weeks for Harrington, which includes his role as vice captain at the Ryder Cup. He started at the KLM Open in The Netherlands and since has gone to Portugal, France, Scotland, England and Spain. After a week off, he resumed at the Turkish Airlines Open and the Nedbank Challenge in South Africa before arriving on the Georgia coast.

The PGA Tour is done for the year. And he is not scheduled to play the European Tour opener in Hong Kong.

Both Americans among the top five in the Race to Dubai, Patrick Reed and Xander Schauffele, are playing the DP World Tour Championship this week. This will be the first regular European Tour event for Schauffele. ... Matt Kuchar with his victory became the 10th player to surpass $45 million in career earnings on the PGA Tour. ... Luke Donald, who was No. 1 in the world for 56 weeks in 2011 and 2012, fell out of the top 500 in the world this week for the first time since the start of 2002. ... Kuchar and Lee Westwood each won on their home tours last week. Their previous victories on the PGA Tour and European Tour were on the same day — April 20, 2014 — when Kuchar won at Hilton Head and Westwood won the Malaysian Open. Both had won other tours since then.

"You doubt yourself all the time. The older you get, the more you do that." — Lee Westwood.