Our Seven Questions series concludes with the Montreal Canadiens – a team whose surprising run to the 2021 Stanley Cup final captivated the National Hockey League.

We will explore the topic on the minds of most Canadiens fans entering the upcoming season: Was last year’s playoff success just a hot month-long run, or was it a harbinger of things to come?

You can’t blame Canadiens fans for having this front of mind despite coming up three wins shy of a Stanley Cup in July. This was a team that finished 19th in goal differential over last year’s regular season, which is part of a telling multi-year trend.

Until this season, there wasn’t anything to hang your hat on when it came to possible roster upside – Carey Price’s performance had waned in recent years, the power play (27th in rate scoring) and penalty kill (20th in rate scoring against) have been weaknesses, and the lack of true shooting talent in the forward ranks (24th in conversion rates) has all weighed on performance.

But two things have changed to the upside. One, general manager Marc Bergevin has been hyperaggressive in free agency, relative to the rest of the league. Players like Tyler Toffoli, Josh Anderson, Mike Hoffman, and David Savard have all inked consequential deals. Irrespective of the cost/benefit implications to the salary cap, that’s more talent available for head coach Dominique Ducharme.

So, what is this team, and what is the potential that last year’s postseason was indicative of things to come?

Here’s tier one, the elite teams. These teams, by and large, sustained their strong play over multiple years. Performance pulled closer towards league average, but still well in range of what we would consider playoff calibre or better: 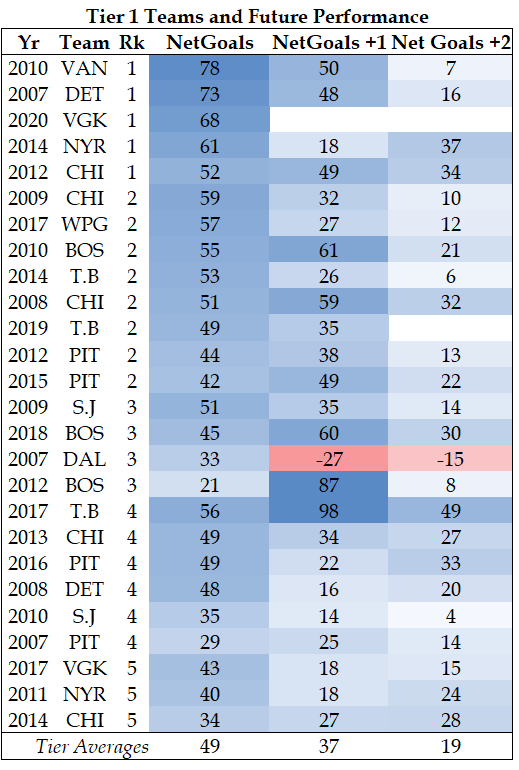 Absent the 2007-08 Dallas Stars (which appears to be a rather peculiar outlier in the group; the club struggled mightily to replace the production from Brenden Morrow and Jere Lehtinen), these teams were dominant and stayed dominant for future periods. In a sport like hockey, where random chance can have a considerable impact on the outcomes of games, this is welcome reaffirmation that talent and coaching still matter. 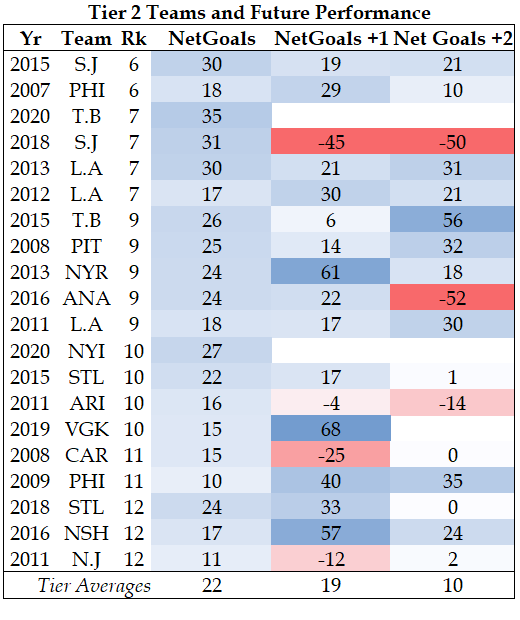 With hindsight, we know that year marked the top for an incredibly lengthy run of success for general manager Doug Wilson. Long gone are the days of Joe Thornton, Patrick Marleau, Joe Pavelski, and Brent Burns whipping the puck around in dizzying fashion in the offensive zone, and the roster building in California is going to continue for quite some time.

That brings us to tier three – or said another way, the teams we really wouldn’t have expected to reach a conference final. The Canadiens appear here not once, not twice, but on three separate occasions: 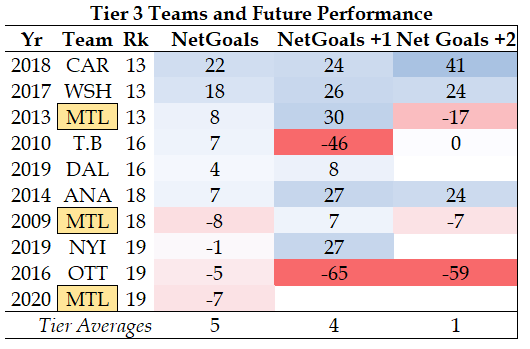 A few takeaways here. One, the obvious point: It’s quite difficult to go as far as the 2020-21 Canadiens did in the playoffs on a base of average or negative goal differential, and last year’s run will never get the credit it deserves. Two, these are by and large average teams that remained average teams in future years. Three, we see a little bit more volatility within this group, perhaps because it’s a mix of teams coming and going.

The 2016-17 Ottawa Senators have been used as a comparison in recent months, but I would say that in Montreal’s range of outcomes, that’s on the lower end of the spectrum. After all, that Ottawa team was extraordinarily reliant on superstars – chiefly Erik Karlsson and Mark Stone – and on the precipice of a major roster overhaul. The Canadiens don’t have a player in that stratosphere, but their roster is deeper. (The 2010-11 Tampa Bay Lightning also had a consequential setback in the following year.)

The same way Ottawa may establish a floor, the 2018-19 Carolina Hurricanes – a team loaded with young talent that took explosive steps forward – offer a ceiling. What the Canadiens want to see from players like Caufield, Suzuki and Kotkaniemi is precisely what Carolina coach Rod Brind’Amour has realized from Andrei Svechnikov, Teuvo Teravainen, Sebastian Aho, and Jaccob Slavin. A few years ago, Carolina was a deadly scrappy team with shaky goaltending. Now they are a perennial contender.

For now, this is merely educational. The good news is we are six weeks out from the start of the regular season and will get our first look at how hungry this Canadiens team is to prove last year’s run wasn’t a fluke.

The bad news? We still must wait six weeks.