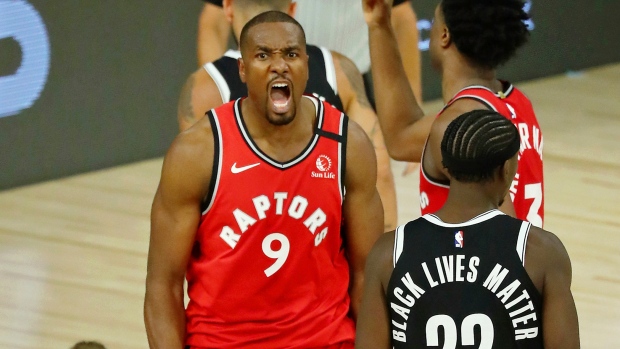 TORONTO – By the time the 2017-18 season came to a disappointing end, it looked like Serge Ibaka had worn out his welcome in Toronto.

The veteran big man was acquired from Orlando a year earlier in the hopes of solidifying the power forward position and helping the Raptors take the next step in the playoffs. Instead, they flamed out again – swept by Cleveland in Round 2 for the second straight year – and Ibaka’s struggles cost him his starting job late in that series.

When Ibaka returned to Toronto the following season, after months of self-reflection and hard work, he was on a mission. Not only did he accept his new role – a full-time shift to centre and a move to the bench – but he embraced and even thrived in it.

Through his inspired play, big personality, and engagement with fans over social media and via his various web series, Ibaka went from being an expendable piece on an underachieving team to an essential, and beloved, part of the Raptors’ championship core. Without his sacrifice, toughness and timely shot making, they don’t win the title in 2019.

It was truly a remarkable turnaround. At one point, as the Raptors looked to get out from under his contract in the summer of 2018, he wasn’t easy to move. Now, in the wake of his departure, what he brought to the team – both on and off the court – won’t be easy to replace.

According to multiple reports late on Saturday night, Ibaka – one of the league’s most coveted unrestricted free agents – agreed to a two-year, $19 million deal with the Los Angeles Clippers. He’ll reportedly have a player option on the second season.

The Raptors met with Ibaka shortly after agreeing to re-sign Fred VanVleet earlier on Saturday. They went into that meeting confident in their chances of retaining the 31-year-old big man.

His decision was a bit of a surprise, given that Toronto would have offered a larger annual salary – nearly double what he got from the Clippers – but on a one-year term. However, Ibaka opted to take the two-year commitment with L.A. and the opportunity to chase another ring with Kawhi Leonard, who he grew close to in Toronto during the championship season.

Unfortunately for the Raptors, losing Ibaka was the cost of juggling different, and in some cases conflicting, priorities going into free agency. Bringing VanVleet back was at the top of that list, and they were able to get it done at a mutually beneficial price - $85 million over four years. They wanted to run it back for 2020-21, with Ibaka and maybe Marc Gasol, but they were also looking long-term and prioritizing cap flexibility for the highly anticipated summer of 2021 free agent sweepstakes.

They were hopeful that Ibaka would be amenable to a big one-year deal but understood there was a possibility he could accept a multi-year offer elsewhere, which is exactly what happened.

Essentially, the Raptors chose the option of keeping a max slot open for next summer over Ibaka, which is entirely defensible on their part, but it’s probably not something that sat well with the 11-year vet.

So, Toronto has work to do. Before they can begin their pursuit of a big-name free agent in 2021 – the star they hope to add to their core of VanVleet, Pascal Siakam and OG Anunoby, whose contract situation could affect how much they have to spend – they’ll have to do some serious patchwork on their rotation for this coming “bridge” season.

With a guard-heavy roster, they’ll have to re-build their frontcourt, and with the exception of Siakam and Anunoby, they’ll be doing it from scratch. Their starting centre, Gasol, remains available as an unrestricted free agent, but is in demand and has recently been connected to the Lakers and Warriors. Their third centre, Chris Boucher, is a restricted free agent and versatile backup Rondae Hollis-Jefferson is unrestricted, though Toronto is limited in terms of what they can offer him without his Bird rights.

They’ve got two-to-four roster spots to fill and are roughly $20 million under the luxury tax threshold. They’re not projected to be a top tier contender this season, so it’s safe to assume their mandate is to avoid spending into the tax. However, after exceeding the cap to sign VanVleet, they’re only able to use the $9.2 million mid-level exception to add external free agents. They can offer Gasol anything up to the max as his Bird rights holders.

At 35, turning 36 in January, perhaps Gasol is more inclined to accept the type of large one-year offer that Ibaka turned down. Bringing back the veteran Spaniard has its obvious pros and cons. He’s battled injuries, declined offensively, and his workload would have to be managed in his 13th NBA campaign. With that said, he’s still an elite defensive centre, he remains one of the smartest and best passing big men in the league, and his veteran presence has value on a team like the Raptors.

The options that remain available on the free agent market – it wasn’t a strong class to begin with – are limited and underwhelming, although the Raptors have had some recent success with reclamation projects.

Could they bring out the untapped potential in former lottery picks Alex Len or Willie Cauley-Stein? Would they take a chance on a talented but volatile veteran such as Hassan Whiteside or DeMarcus Cousins, who is coming off a torn ACL and another lost season? Is their mid-level exception enough to lure the underrated Aron Baynes away from Phoenix? How about a reunion with former Raptors fan favourite Bismack Biyombo? Would they consider moving somebody like Norman Powell for an expiring big?

These aren’t great options, and whoever is anchoring the paint this season will likely be a significant drop off from the Ibaka and Gasol tandem that helped lead the team to its first championship. Still, the reason the Raptors find themselves in this predicament – in need of a replacement for Ibaka and looking for a stopgap solution at the position – is because they’ve got their eye on what could be the club’s next championship window.​