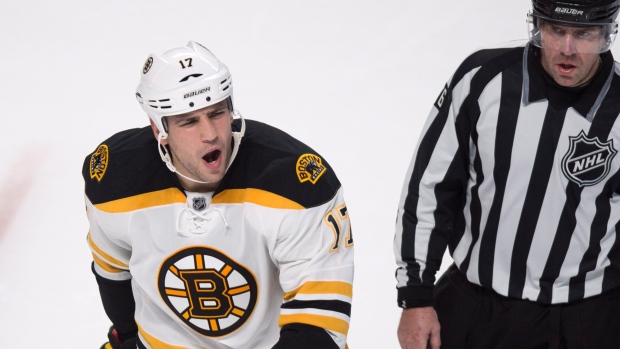 One quick look at the Boston Bruins salary cap situation and you start to realize that new general manager Don Sweeney has his work cut out for him this summer.

The Bruins, like a handful of other teams around the league, are already pushed near the salary cap ceiling. Most estimates have the team with $4-million to $5-million in available cap space, though those numbers can change slightly depending on what the players do with the escalator clause built into the new collective bargaining agreement.

Dougie Hamilton alone is going to command a rather hefty salary – even if the team plays hardball with the restricted free agent, and you can bet they will, there’s a very good chance he’ll eat into much or all of the remaining cap space left for the team this year. It doesn’t leave them any wiggle room to build around their core pieces – in fact, it barely lets them replace the holes being created by departing unrestricted free agents.

I do think the Bruins have one course of action to get out of trouble, though, and that is to part ways with Milan Lucic. There are two reasons for this, and they both tie back into life in the salary cap era. Lucic, on the final year of a $6-million average annual value contract, is set to become an unrestricted free agent at the end of next season. As with any unrestricted free agent (and doubly so for cap distressed teams), you never want to run into the position where you lose an asset for nothing.

Even if the Bruins want to keep Lucic around, it’s really unclear if they’ll have the resources to do it. So, the team is already incentivized to consider trade options around the league.

Another incentive to potentially pulling the trigger on a Lucic deal? There is some evidence that his game has deteriorated a bit over the past few seasons. Consider first his per-60 scoring rates at even-strength over the last five seasons, and notice how there’s been a considerable slide in the last few years:

I don’t know if his low-scoring 2014-2015 season was an outlier or not (1.7 points per 60 minutes), but I do think there’s something of a pattern being established here. From the lockout-shortened season on, Milan Lucic has been closer to league average scoring rates for forwards than ever before.

As is always the case, I like to see if the underlying numbers give us any idea as to why the basic numbers have radically deviated. Have Milan Lucic’s on-ice numbers slipped relative to his individual scoring rates, or is there some random variance at play? Below, are his team-relative Corsi and Scoring Chance numbers (via War on Ice): 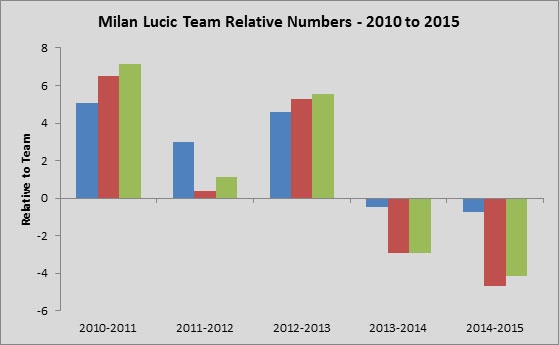 An ‘average’ player generally sits around the zero-mark here, which would signify that his team was no better or worse with him on the ice than with him off of the ice. You’ll notice here that Lucic – by any of the three measures – was rather effective from 2010-2013, the Bruins considerably better when he was on the ice than when he was on the bench.

In the last two years, we have seen emphatic reversal. The Bruins have been beaten up rather soundly with him on the ice, and have fared better with him off of the ice. And, again, that’s true if you want to look at Corsi%, or either of our scoring chance measurements.

This is where things start to get a bit worrisome if you’re new general manager Don Sweeney and looking long-term. A few seasons ago, Milan Lucic may have been the prototypical power forward. But, the last two seasons of his career haven’t been nearly as impressive, and the organization – in a temporary position of cap distress – needs to consider all options.

What makes Lucic the likely trade candidate, to me anyway, is he checks a series of boxes for Don Sweeney. He carries a large cap hit. He’s a desirable commodity in a league that obsesses over size and strength. His performance has quietly dropped off, and there’s a real possibility that his value around the league exceeds his true value. Trading him means the team would pick up a series of assets in return that could revitalize a drained system, and avoid an ugly scenario in which he walks in unrestricted free agency to a competitor. Or, alternatively: it avoids an ugly scenario in which Boston feels compelled to extend Milan Lucic on a long-term deal, one that he may never live up to.

Upon accepting the job offer, Don Sweeney vowed to return Boston to their glory days of outright aggression and hostility. Ironically enough, his first move to get Boston back to that position could be to deal one of his most physically intimidating players.