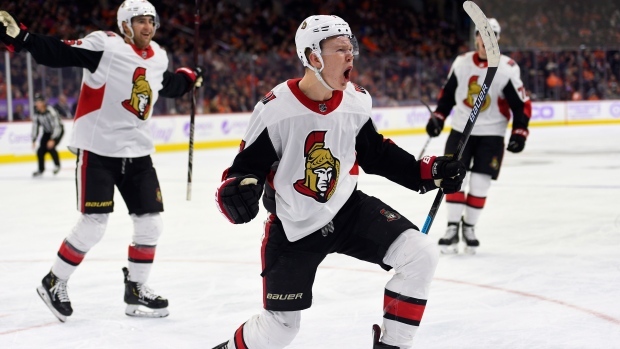 When the Ottawa Senators tried to sell their fan base on a lengthy rebuild, the argument was relatively straight forward – allow us to break this roster down to the foundation, build it back up through the draft and player development, and prepare for a five-year run of “unparalleled success” starting in 2021.

It is obviously quite aspirational. However, it did serve notice that the team only expects to take some lumps for a short period of time. Ottawa’s 2018-19 season was expectedly gruesome, and outside of watching young talent develop, 2019-20 figures to be more of the same.

That said, it is a critically important transitional year for Pierre Dorion, the Ottawa coaching staff, and the entire roster. To build the confidence that an increasingly interesting prospect pool is about to take the next step to become integral NHL players, the team needs to show some degree of competitiveness this season.

Enter D.J. Smith, who Ottawa poached from their rivals in Toronto. At the time of the hiring, Smith remarked that he was interested in the position because of the club’s young talent and was confident that the organization was heading in the right direction. The Ottawa Sun’s Bruce Garrioch had some fantastic insight into the hiring, including why the Senators targeted Smith, what he thought the team needed to turn it around, and how system changes would help drive performance.

From that piece, two quotes stuck out to me from a data perspective. The first was his postmortem of last year’s play:

“They had no ‘O-zone’ time and they had the least offensive-zone time in the league. They actually outscored their chances and, if you look at analytics, they scored more than they should have scored,” Smith says. “They didn’t have much time spent in the ‘O-zone,’ and when you don’t spend any time in the ‘O-zone,’ that means you’re going to spend a ton of time in the (defensive) zone."

The second, how they would turn it around:

“You’ve got to keep the puck out of your net and we have to commit to playing defence,” says Smith. “From Day 1, right on down. Our division is the best division in hockey. It’s no secret: You’ve got Tampa, Toronto, Florida, Buffalo got better and the Boston Bruins were one game from the Stanley Cup.”

Nothing Smith said was incorrect – the team had a tremendous issue clearing the defensive third, and to the extent they did, had an equally difficult time transitioning the puck. The team relied heavily on counterattacking opportunities as well. Counterattacking opportunities create a higher likelihood of a goal scoring sequence than the traditional five-man offensive zone set, but they are also considerably harder to establish. And at the end of the day, shot volume on either end of the ice tends to dictate how the goals and wins will fall.

The challenge that Smith is facing? Team talent is quite repeatable year to year, particularly when we are talking about the ways in which teams drive favourable or unfavourable shot advantages (or scoring chance advantages, or expected goal advantages, and so on.) There are many reasons why, but at the top of the list is the reality that most teams tend to turn over similar rosters, similar coaching staffs, similar styles of play, and so on. If you look at every team’s year versus next year net shot differential, you can see there just isn’t much volatility here: 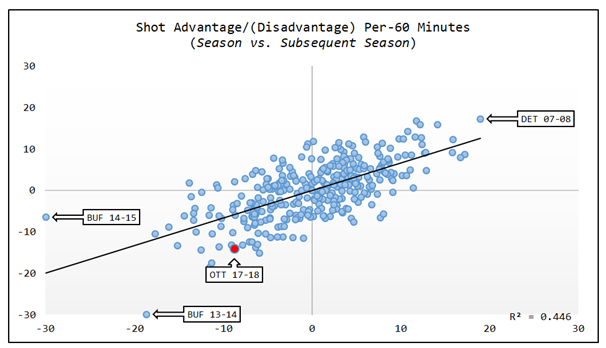 I kind of regret putting the 2013-14 Buffalo Sabres on this if only because they were one of the very few teams that was actively trying to lose games leading up to the 2015 NHL Draft, featuring the likes of Connor McDavid and Jack Eichel. Absent that, you can see the hill that Ottawa has to climb here. Teams who are historically out-shot and out-paced tend to remain so in the following season, and vice versa for teams on the right size of the shot ledger. Based just on the twelve years of sampling data, a quick regression-based guess for Ottawa’s net shot differential per-60 minutes next year would be -9.5 – about five shots better than what we saw last year, but still tremendously in the red.

Still, we aren’t talking about becoming the 2007-08 Detroit Red Wings overnight. What we are trying to see is what degree of improvement is even feasible based on historical performance across all 31 NHL teams. From the graph above, I subset down to the teams who saw the biggest jump year to year in shot differential. There’s an interesting commonality: 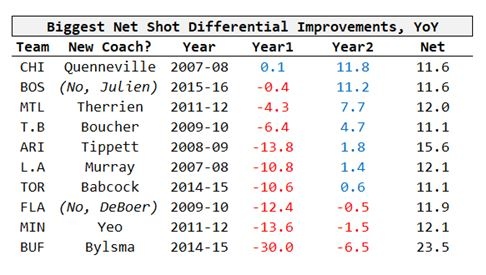 Turning it around in one year is quite difficult. But there are two things in Ottawa’s favour. One, it’s been done before – we have 10 teams here that saw a considerable shift in the way they drove territorial advantages and shot differentials in just one season, and in some cases considerably so. Two, eight of the 10 we selected were underpinned by coaching changes. Now there is going to be a bit of selection bias in the sample – most of the teams who made considerable gains did so because their prior season was that bad, and bad seasons tend to lead to coaching staff changes. That said, count the number of coaches who (a) did turn around their respective team in the given year; and (b) are still coaching to this day.

Coaching matters. And in some cases, considerably so. The jury is still out on Smith and, more generally, Ottawa’s rebuild. But if the talent Dorion has acquired is truly on the way, Smith has a chance to turn this ship around. Expecting that in 2019-20, though, seems like a rather poor bet.