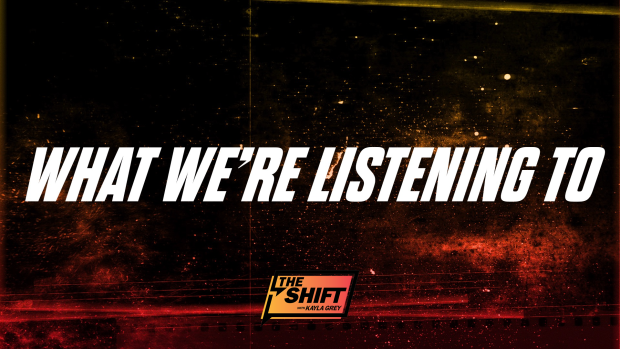 A brief one week hiatus (we all have to take a break sometimes) but nevertheless, we are back for another week of new music! This week, we’re listening to new releases by Kanye West and XXXTentacion (!!!), along with drops from Eminem, Chance The Rapper and Calvin Harris.

And of course, as you should probably know by now, you can listen to more tunes for your head top at the official THE SHIFT playlist on Spotify. Tune into what our team is listening to, you won’t be disappointed.

While “True Love” isn’t entirely a new track, it’s the finished version of the opening track of Kanye West’s DONDA 2, with the original only available via Ye’s Stem Player device in which the album was released on in February. It was also teased at West’s DONDA 2 listening party in Miami — with X’s signature vocals, coupled with the burning house, dang near bringing all of us fans into some serious feels.

“True Love” will appear on XXXTentacion’s upcoming posthumous album, Look At Me: The Album, which is yet to get a release date and is featured playing over the end credits of the late rapper’s new Hulu documentary, Look At Me: XXXTentacion, which released on May 26. The cover artwork for “True Love” was designed by Kanye and features handwritten notes from X, which come from a personal journal that his mother recently found.

I’m really not trying to make hip-hop fans feel old here but believe it or not, the original The Eminem Show album is TWENTY years old now! To commemorate the 2002 Billboard juggernaut’s album, Em has delivered an expanded version of the original project, even taking to Twitter to make the announcement with a spin on the lyrics from one of his most popular songs, “‘Till I Collapse.”

"'Til I collapse I'm spillin' these raps/ long as you feel 'em" 20 YEARS since #TheEminemShow 📺 !! Expanded Edition out now- https://t.co/QTqBcJS2Vz 📹 pic.twitter.com/r2w1oa06kp

The 38-track project contains 18 bonus songs, including four previously unreleased cuts and several instrumentals. It also features live versions of some key Marshall Mathers LP tracks, “The Way I Am” and “The Real Slim Shady.”

Chance The Rapper - “A Bar About A Bar”

At this point, Chance is honestly just teasing us. The dude is in full-on album mode and all we can do is wait for him to drop a project of greatness.

In the meantime, he’s dropped another song in his now-constant string of recent releases, or what he dubs as “writing exercises,” the first being “Wraith” alongside fellow Chicago rapper Vic Mensa, followed by “Child of God,” an emotional roller coaster of a single that saw Chance open up about some of the troubles that haunt him from his past.

Next up is “A Bar About A Bar.” This one’s a quick one however, with a brief runtime of barely over a minute. Honestly, this one was interesting. It saw Chance tell a rather short, yet impactful story in a rhyme that ends somewhat abruptly. Along with a music video that sees Chance hopping from his house to the pier to an actual bar, it makes us hopeful that this all means a new body of work from Chance is officially on the way — particularly his next big single, “The Highs & The Lows” featuring Joey Bada$$, which was teased via a billboard in Chicago.

There certainly is something about Calvin Harris and creating summer anthems, and this track is no different.

“Potion,” featuring Dua Lipa and Young Thug, is built around a smooth Rhode riff and bass along with some rhythmic guitar jabs to give the beachside vibes that Harris is so good at projecting. It’s only fitting that this track will be part of upcoming album, Funk Wav Bounces, Vol. 2, due sometime this summer as the sequel to his star-studded summertime party record. Harris also dropped an accompanying Emil Nava-directed music video to get the party started early.