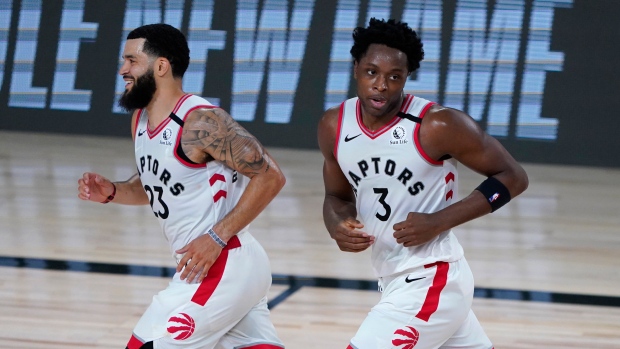 TORONTO – The Toronto Raptors were given one of the league’s toughest, if not the toughest, seeding games schedules for the NBA restart. They’re more than a third of the way through it now and still haven’t been beaten.

The Raptors last loss came way back on March 1 – 159 days ago. They’re 3-0 in the bubble and have won seven straight games overall – the longest active streak in the association.

At 26-7, they have the league’s best record in 2020, and they’re just one win (or Boston loss) away from clinching second place in the Eastern Conference. Disney living is good for the defending champs.

“We are not easy to beat, and we believe in ourselves,” said Marc Gasol, following Toronto’s most recent victory, a dominant showing over Orlando on Wednesday. “We have a lot of tools, a lot of players, a lot of great players, and, to me, the best coaching staff you can have in the NBA right now. You have all the pieces; you’ve just got to put them together and have everybody buy in and sacrifice a little bit for the best of the team.”

As the Raptors gear up for the playoffs, we’re getting a better idea of what Nick Nurse’s rotation might look like come Aug. 17. Here are a few takeaways through three games.

If there was ever any doubt – and there shouldn’t have been – Nurse’s plan is to stick with his original opening night starting lineup of Kyle Lowry, Fred VanVleet, OG Anunoby, Pascal Siakam and Gasol.

With VanVleet hurt and Norman Powell playing the best basketball of his career just before the season was put on hold in March, Nurse left the door open for a change. Would he platoon the two guards once VanVleet returned? Had Powell shown enough to supplant VanVleet altogether?

Then, there’s Nurse’s fascination with the so-called “jumbo lineup” that he was experimenting with in practice last month. The Raptors even started their final two scrimmage games with Gasol and Serge Ibaka in the frontcourt, shifting Siakam to the three and Anunoby to the bench. Would that stick?

Nurse’s preference has always been to keep his options open and remain flexible and fluid with his lineups, but he knows what he has in his original group of five. No need to get cute or overthink it, just start your best unit. And this is unquestionably his best unit.

Lowry, VanVleet, Anunoby, Siakam and Gasol played a team-high 280 minutes together before the hiatus, but they hadn’t shared the court since Jan. 28 because of the injuries to Gasol and VanVleet. Still, they haven’t missed a beat.

Through three games in the bubble, the Raptors have outscored teams by 37 points in 56 minutes with them on the floor. They’re holding opponents to a ridiculous 72.5 points per 100 possessions and 30 per cent shooting. On the season, their net rating of 15.4 ranks fourth in the league among five-man units that have played at least 200 minutes together.

It’s not hard to see why they’ve been so successful. Lowry, VanVleet and Gasol are among the NBA’s smartest and craftiest players. Siakam and Anunoby are versatile and athletic. All five can shoot, they can all handle and pass the ball, but most importantly, they are all plus-defenders. That’s what makes them truly special.

“Before a pass is ever made you’ve got to have some desire, you have to have some readiness, you got to have some anticipation. You’ve got to have some IQ before the ball has even started in an offensive sequence,” Nurse said. “We’ve got a bunch of guys that are locked in on that. They pay attention to the game plans. They’re basketball guys. They watch the other teams, they study them. They like stopping them. It’s kind of an interesting thing that they got going. They come to the game and they start figuring out how we’re going to stop them. They really try to make adjustments, there’s communication amongst them, each other. It kind of feeds from there.”

“It’s just a testament to what we do here,” VanVleet said. “It's a testament to our culture. Give management some credit, give [the] coaching staff a lot of credit, give us players some credit. We've gotta go out there and perform on a night-in and night-out basis, and like I said before, we've just got a lot of guys who are dedicated to that end of the floor. We understand that's where we're going to be most successful – if we continue to play defence at a high level.”

That the Raptors have gotten comfortable using variations of this unit through injuries and mid-season tinkering can’t hurt. If and when a playoff opponent shows them a different look, they know they can go bigger with Gasol and Ibaka or go smaller with Powell. However, as long as they remain healthy expect Nurse to open games – and, in most cases, close games – with his best unit.

The bench is still figuring things out

If there’s one area of (very minimal) concern through three games it’s the performance of the Raptors’ bench. It’s a bit surprising, given their depth has been a strength throughout the course of an injury-plagued season. On the other hand, now that they’re healthier than they’ve been since November, you can understand why it could take some time for players to re-adjust to their natural roles – coming off the bench or logging fewer minutes.

“It’s different when we had guys out and touches and minutes and things like that. You’re able to find a flow and rhythm,” Powell said. “But with everybody back it definitely feels like the beginning of the season. We’ve talked about it amongst ourselves a little bit and it’s a fun time for us to figure everything out.

“The great part about it [is] we’re winning games while we’re trying to figure out the flow with everybody being back.”

Toronto’s bench has been outscored 152-77 by opposing reserves so far in the bubble. Perhaps they were able to turn a corner on Wednesday, though.

After shooting 6-for-21 in the first two contests, Powell hit five of his 10 attempts and scored 14 points against Orlando. Ibaka recorded 11 points to go along with his nine rebounds. Rondae Hollis-Jefferson, who turned his ankle in Saturday’s win over the Lakers, also bounced back and made some solid reads in the pick and roll during his extended fourth-quarter run.

Rookie Terence Davis remains quiet, though. There isn’t a Raptors player that came into the restart with more at stake in terms of his place in the rotation. So far, it’s been a missed opportunity for the 23-year-old, especially with Patrick McCaw – his primary competition for minutes – out of the lineup. His minutes have been sporadic, but he’s not doing enough with them to earn more.

“He’s playing okay,” Nurse said of Davis after Wednesday’s game. “We’re not finding great minutes for him, long stretches. The guys that are playing, they don’t think they’re playing enough either. Norm and Fred, Kyle, all those guys want to play more, OG. We’re fairly healthy right now, so it makes it a little hard. But he’s fine, Terence is fine. He just hasn’t had a game where the ball’s come to him very often, where he’s been able to vault up and hit them. He’s been pretty solid on defence, pretty solid, pretty happy with that down there.”

Playoff rotation will be tight, with spot minutes up for grabs

To Nurse’s point, as long as the top seven guys – the starters, along with Powell and Ibaka – are healthy, there won’t be many minutes available for everybody else.

When the season began way back in October, and before all the injuries hit, Nurse leaned on his seven returning veterans, partially because there was a level of familiarity there – they had won a championship together – but mostly because he didn’t trust the young players on his roster.

That’s no longer the case. Those guys have each stepped up and had breakout stretches at opportune moments throughout the campaign. They’re a big reason why the Raptors were able to withstand so many injuries and why they’re on the verge of clinching the second seed. They’ve proven themselves and earned Nurse’s trust.

Still, the hierarchy hasn’t changed. Once the rotation tightens for the playoffs, the bulk of the minutes will go to the core seven, with one or two of the other guys picking up spot minutes each game. In terms of who those one or two other guys could be, it’ll likely be situational.

If we’ve learned anything over the last three games, it’s that Hollis-Jefferson should get first crack at landing one of those spots, on account of his experience, versatility and the energy he brings off the bench.

Chris Boucher has only played three minutes of garbage time and was inactive for the game against Miami. He was a standout in last month’s training camp and has been efficient in his minutes this season, so it wouldn’t be a surprise to see him make an impact on a postseason game at some point, though he’ll probably have to be patient and stay ready.

Matt Thomas’ role appears to be similar. Having an elite shooter sitting on the bench is a nice luxury for Nurse to have. It could come in handy, depending on the matchup and game script, but he would seem to be behind Davis in the guard rotation. The real question is where Davis factors in if and when McCaw returns.

McCaw has been battling reoccurring soreness in his left knee. He missed 20 games earlier this season after undergoing surgery to remove a benign mass from that same knee. It’s unclear when he’ll be back and what condition he’ll be in when he returns.

When healthy, Nurse has used McCaw as the eighth man. It will be interesting to see if he reclaims that role upon his return, or if those minutes – and we’re probably only talking about five to 10 of them come playoff time – are divvied up elsewhere.​