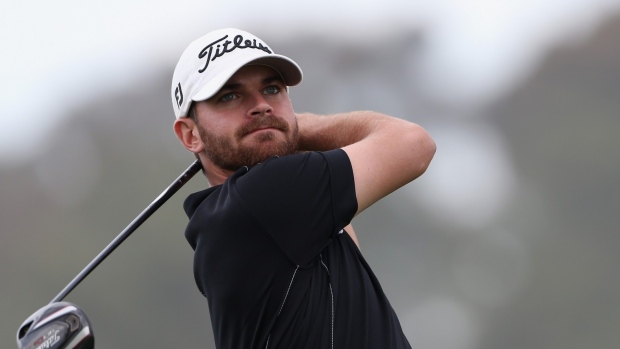 COURTENAY, British Columbia—Riley Wheeldon is definitely using a home-course advantage to his advantage, finishing his second round in a similar fashion to his first and leading the competition with a 10-under 134 after 36 holes at the Crowne Isle Resort and Golf Club on Wednesday.

Recording back-to-back 5-under 67s, the 31-year-old acknowledged that even though his score was the same, today felt different than yesterday.

“I putted really nicely today,” Wheeldon said. “Now, I didn’t hit the ball quite as well, but I felt really good over the putter.”

Wheeldon, whose PGA TOUR Canada career dates back to the Tour’s first season in 2013, has made only two other Q-School appearances, both at Crowne Isle and both earning him status in the PGA TOUR Canada. This time, however, his experience feels a bit different, as well.

“This is a lot different for me,” he added. “Sure, there’s still some stress and nerves, I still want to be competitive, but in the past, it has felt like life or death to me.  I’m in a pretty good spot in my life right now and am just happy to be here, happy to see family. Whatever happens, happens, and so far it’s been good. I’ve seen most of these pins before and as long as I stay patient and keep having a good time, I should be alright.”

Yesterday’s leader, Max Sear recovered after his double bogey on No. 16 with back-to-back birdies to finish his second round with a 3-under 69 to sit tied in second with fellow Canadian Jared du Toit. Du Toit marked a strong round of 5-under 67 and now holds - with Sear - a two-shot lead over their countrymen Andrew Harrison and Brendan MacDougal who are tied in third with 7-under 137s. For the first time during the entire qualifying season, all top-five competitors hail from Canada.