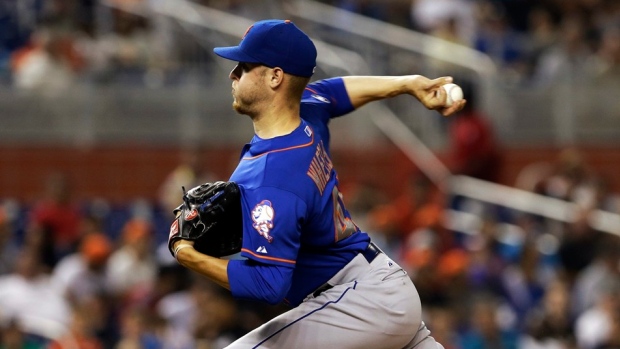 MIAMI - Zack Wheeler and the New York Mets got the best of Andrew Heaney during the Marlins prospect's major league debut.

Wheeler tossed his first shutout and made David Wright's first-inning home run hold up in the Mets' 1-0 victory over Miami on Thursday night.

"He showed you exactly what we've been talking about all along — plus stuff. Tremendous, great effort," Mets manager Terry Collins said of Wheeler. "He went after them. It was his night."

Wheeler (3-7) outdueled Heaney in the longest outing of the Mets starter's career.

"It feels great, I know I can do it every time out," Wheeler said. "I know I have the stuff. It finally feels good to go out there and do it and be efficient with my pitches and get ahead of guys."

New York, which won at St. Louis on Wednesday, has consecutive victories for the first time since a three-game streak from May 31-June 2. The Mets had dropped eight straight on the road before Wednesday.

He pitched to only one batter over the minimum and was helped by three double plays.

"Anytime somebody gets on, whether it be a walk or hit, you just try to make a pitch and get a double play. I was able to do that," Wheeler said.

The 24-year old right-hander lowered his ERA to 0.96 in four starts against the Marlins.

"He didn't miss over the plate much," Marlins catcher Jarrod Saltalamacchia said. "He was really good with locating his pitches off the plate. He threw a lot of fastballs, like we expected, but he didn't leave anything over the plate.

"You've got to tip your cap to a guy who pitched a great game."

Heaney (0-1) gave up four hits in six innings, allowing only Wright's home run. The 23-year old lefty, the ninth pick in the 2012 draft, struck out three and walked one.

"He did a nice job, gave us a chance and kept us in the game," Marlins manager Mike Redmond said. "He gave up one pitch to a really good hitter for a home run and that was it. He executed his pitches, got his pitch count up high early, but then settled in.

"All in all it was a good start for him."

It was a battle between two young starters that could see a lot of each other in coming years in the NL East.

"That's what the game is coming to," Collins said. "The game is changing where those big power arms are coming up in every organization, and they're all young."

Heaney allowed an infield hit to Eric Young, Jr. to begin the game, but got Daniel Murphy to bounce into a double play. Wright then hit his sixth homer of the season off the sculpture in deep left-centre field.

No one else got into scoring position against Heaney.

"I had no expectations, to be honest," Heaney said. "I just wanted to pitch well. I felt early on I didn't know how it was going to go. It was kind of on the edge with every guy. From that fourth inning on I got into a rhythm."

Bryan Morris relieved Heaney in the seventh and faced a bases loaded situation, but he got Wheeler to ground out and end the threat.

Wheeler, who made his much-anticipated debut a year and a day before Heaney, complimented his mound opponent.

"I sat on the bench in between innings and just watched him, knowing that I was there not too long ago and knowing how he felt," Wheeler said. "He has a good arm, and I think he's going to do well."

Kevin Gregg pitched the ninth in his season debut with Miami. He earned 61 saves for the Marlins in 2007-08.

Reed Johnson singled in the ninth off Wheeler with two outs, but Rafael Furcal lined out to centre to end the game. Wheeler threw a 95 mph fastball on his final pitch.

"I still had plenty," Wheeler said.

NOTES: Mets OF Kirk Nieuwenhuis was recalled from Triple-A Las Vegas, and OF Matt den Dekker was optioned to Las Vegas. ... Marlins slugger RF Giancarlo Stanton went 0 for 3 with two strikeouts after coming out of Wednesday's game because of a bruised left wrist. ... New York will send RHP Daisuke Matsuzaka (3-0, 2.81) to the mound on Friday against Miami RHP Henderson Alvarez (3-3, 2.56).