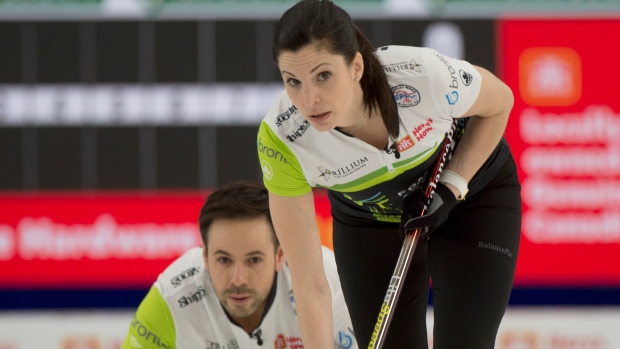 With the Omicron variant continuing to spread at a rapid rate, Curling Canada made the difficult decision on Boxing Day to cancel this week’s Canadian Mixed Doubles Olympic Trials in Portage la Prairie, Man.

"The increasing numbers of trials-bound athletes testing positive for COVID-19, along with the rise in cases across Canada, made it impossible to stage the event in a safe, responsible manner for athletes, staff and volunteers," Curling Canada said in a statement.

"Unlike the Calgary bubble, which had months of preparation time and allowed athletes to self-isolate at home, and get tests done prior to their departure for the events, the dramatic rise in positive cases related to the sudden emergence of the Omicron variant across Canada in the past week made those safety precautions impossible to carry out."

What a week it has been. The ups and downs, twists and turns. I can tell you Nancy and I are healthy and we're ready to go for this week. Looks like hot cocoa and lots of shoveling instead. Thoughts are with my fellow mixed doubles competitors @CurlingCanada #trials

Well this is disappointing.. not the news we wanted. We feel for all the MD teams who were supposed to compete. We are both grateful though to be safe and healthy during these crazy times! https://t.co/FysIiPjHLd

While this is the right call, it’s an absolute gut-punch. The insane amount of time and money spent to qualify/prepare for this, all for naught. And curling isn’t the only sport affected… perhaps time to consider postponing the @olympics ? https://t.co/CfOQWTsim1

Hard to take in that we are back to shutting down pic.twitter.com/XaJA5eSHAv

Chasing an Olympic dream wouldn’t be possible without the support of our sponsors. @EppingJohn and I are disappointed the mixed doubles trials are cancelled but are so appreciative of the support Team Weagle/Epping has received 🥌 pic.twitter.com/V4LymuQqOt

With no Trials to play, Curling Canada, in consultation with the Canadian Olympic Committee and Own the Podium, is now tasked with the decision of picking the mixed doubles duo to send to the Beijing Olympics.

The 16-team Trials field was so wide open that nearly every pair had a shot at representing Canada at the Olympics. So, with so many worthy options available, how do you choose the team that gets to go to Beijing?

Let’s look at some of the options that will be considered. 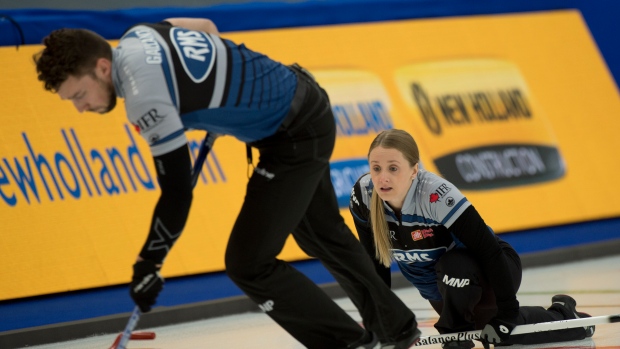 A lot of curling folks on Twitter have raised the idea of Jocelyn Peterman and Brett Gallant competing in the mixed doubles tournament for Canada.

For that to happen, Curling Canada would have to amend their rule of not allowing curlers to compete in both mixed doubles and four-person curling at the Olympics. That seems like a possibility as Peterman and Gallant will already be in Beijing with Team Jennifer Jones and Team Brad Gushue.

In addition to the benefit of keeping the travel numbers down amid the current COVID-19 surge, Peterman and Gallant are one of the best mixed doubles teams on the planet.

The engaged couple, who currently sit No. 1 on the Canadian Mixed Doubles Rankings (CMDR), are two-time Canadian mixed doubles champions, having won in 2016 and 2019. They also own a silver medal for the 2019 World Mixed Doubles Championship.

The only apprehension of choosing this tandem is that they’ll have to add a lot more curling to their schedules and may not be as rested once the four-person tournaments start. 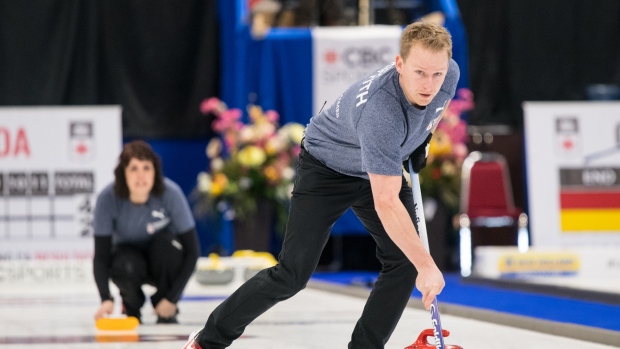 Nancy Martin and Tyrel Griffith have played together for a few seasons now and were finalists at the 2019 Canadian Mixed Doubles Championship where they lost to Peterman and Gallant. They’ve competed in four events this season, qualifying for the playoffs twice and winning a bonspiel in Vernon, B.C., earlier this month.

Sitting at No. 3 on the CDMR, the team out of the Martensville Curling Club in Saskatchewan are the highest-ranked team not already competing in Beijing and are definitely a viable option.

Jennifer Jones and Brent Laing hold the No. 2 spot on the CMDR; however, Jones will skip her four-person team following the mixed doubles tournament. Laing was slated to play with Selena Njegovan at the Trials, which would have been their first event together. 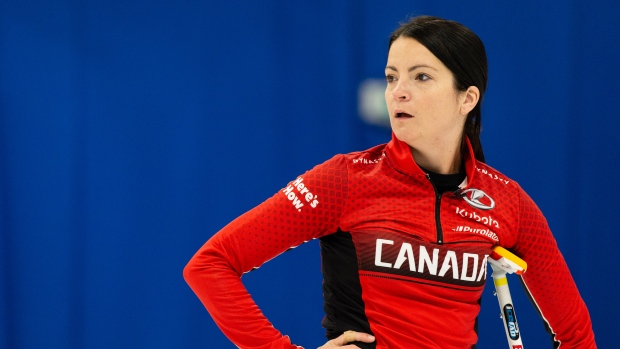 Kerri Einarson and fellow skip Brad Gushue are the most recent Canadian Mixed Doubles champions after winning the national title last year inside the Calgary bubble.

However, like Jones, it’s unlikely Curling Canada wants their skips competing in mixed doubles ahead of their four-person competitions.

For the Trials, Einarson found a new Brad to partner with as Brad Jacobs agreed to dip his feet in the two-person game. Jacobs is an Olympic champion and one of the most talented curlers on the planet but has never played the discipline before. 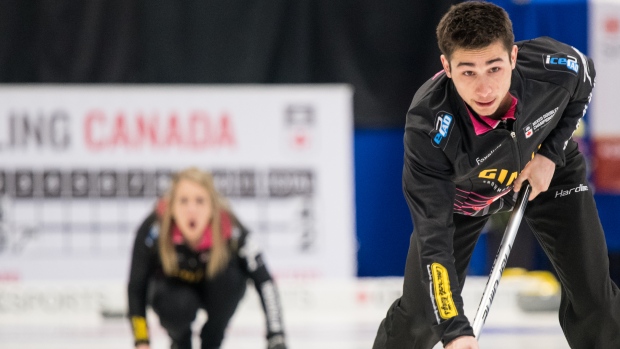 Kadriana Sahaidak and Colton Lott would have been top contenders in Portage la Prairie in their first career appearance at the Mixed Doubles Trials.

The engaged couple have medalled at every Canadian championship since 2018, earning two silvers and one bronze medal.

They fell to Gushue and Einarson in last year’s final.

Sahaidak, 22, and Lott, 26, curl out of the Winnipeg Beach Curling Club and won a bonspiel in Morris, Man., earlier this season. 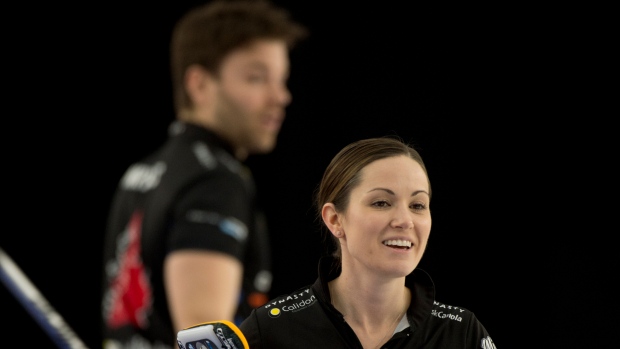 They also grabbed bronze at the 2019 nationals and fell to Einarson and Gushue in the 3 vs. 4-page playoff at last year’s event.

Walker and Muyres lost the Okotoks Mixed Doubles final to Australia's Tahli Gill and Dean Hewitt in late October. Walker competed at the 2018 Trials with husband Geoff Walker and posted an impressive 8-0 round robin record but was ousted in the Round of 8. 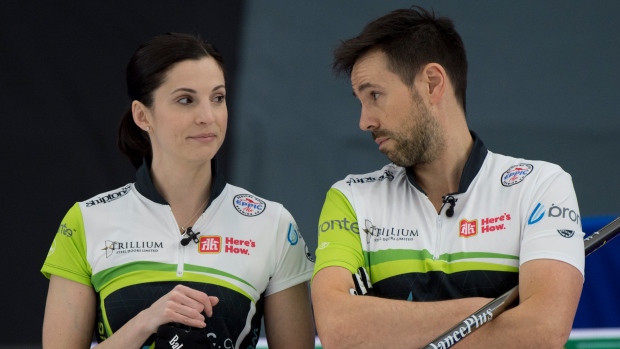 Another interesting possibility features Lisa Weagle, who is headed to Beijing as the alternate on Team Jones.

Before the cancellation of the Trials, Curling Canada confirmed that it would allow alternates to also compete in the mixed doubles tournament at the Olympics, so Weagle was ready to play in Portage with partner John Epping.

Ranked fourth in Canada, Weagle and Epping qualified for the Trials after reaching the final of the Aly Jenkins Mixed Doubles Memorial and have made the playoffs in all four of their events this season. The Ontario tandem lost to Walker and Muyres in the Round of 8 at last year’s Canadian championship.

Marc Kennedy will also be in Beijing as Gushue’s fifth. Is there any chance Curling Canada puts Weagle and Kennedy together at the Olympics in what would be their first competition as teammates?

Kennedy regularly plays mixed doubles with Val Sweeting and that option could be on the table as well.

The two left-handed throwers competed together at the 2021 Canadian Mixed Doubles Championship, making it to the Round of 12 where they lost to Weagle and Epping.

Back at the 2018 Trials, Sweeting partnered with Gushue and made it all the way to the final game. 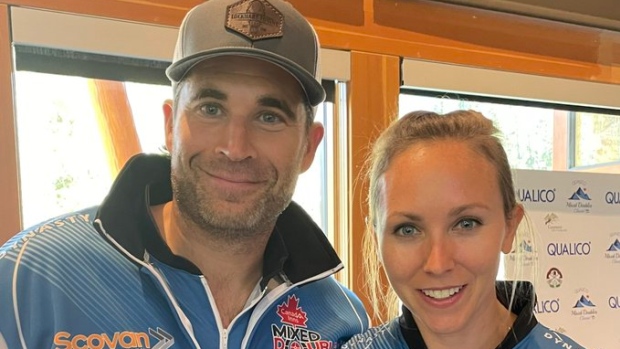 The duo of Rachel Homan John Morris, ranked fifth in Canada, is probably the most star-studded option available.

They are the only team (aside from Jones and Laing) with both players having experience at the Olympics. Morris won gold with Kevin Martin in 2010 and then mixed-doubles gold with Kaitlyn Lawes in 2018. Homan skipped her four-person team at the 2018 Games as well.

In their only event of the season, Homan and Morris captured the Qualico Mixed Doubles Classic in October by going a perfect 8-0 and beating Peterman and Gallant in the final.

Back in 2017, Homan and Morris were runners-up at the Canadian Mixed Doubles Championship, losing to Joanne Courtney and Reid Carruthers in the championship game.

Danielle Schmiemann replaced Homan, who was in the late stages of her pregnancy, at last year’s Canadian championship. Schmiemann and Morris made it all the way to semis where they dropped a 7-6 decision to Einarson and Gushue. 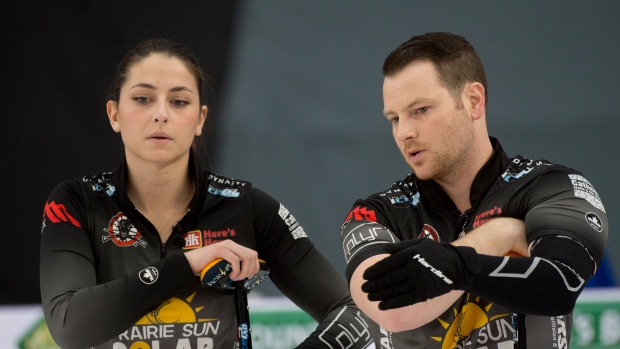 Ranked sixth on the CMDR, Shannon Birchard and Catlin Schneider could be in the running as well.

They went 5-2 at the Canadian Mixed Doubles Championship last year before falling to Schmiemann and Morris in the Round of 8.

The tandem has played two events this season, including making the semis at the Aly Jenkins Mixed Doubles Memorial in September. 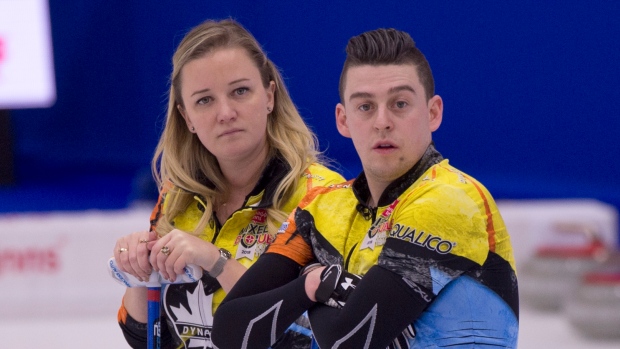 Long-time teammates Chelsea Carey and Colin Hodgson were pumped to play in their second Canadian Mixed Doubles Trials before the cancellation.

Four years ago, the Manitoba tandem finished with a 5-3 record in the round robin and were a win away from making the four-team page playoff but dropped a tough 9-7 extra-end decision to Jones and Mark Nichols.

They also finished third at both the 2017 and 2018 Canadian Mixed Doubles Championship.