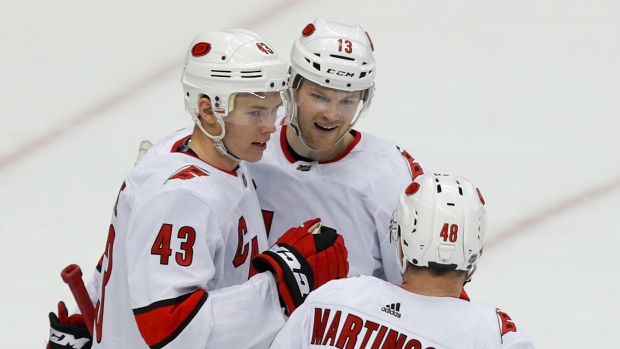 On Saturday he was in the minors. By Sunday afternoon the newest Carolina Hurricanes forward found himself thrust in the middle of the playoff race. The 21-year-old rookie hardly looked overwhelmed by the moment. Neither did his team.

Geekie scored twice and dished out an assist in his NHL debut, a 6-2 victory over listless Pittsburgh that capped a frantic 24 hours for the 2017 third-round pick. He arrived in town late Saturday night after being called up from the American Hockey League.

By the middle of the first period, he'd already had his first NHL goal then added an exclamation point in the third period to cap a dominant performance by the Hurricanes. Things happened so quickly Geekie didn't have time to get nervous.

Justin Williams added two third-period goals for Carolina, which pulled into a tie with Columbus and the New York Islanders for the two wild-card spots in the Eastern Conference. Columbus plays in Vancouver on Sunday night. Alex Nedeljkovic stopped 28 shots to earn the second win of his career for Carolina.

“That third period was as quiet as I've ever heard this arena,” Williams said. “This arena gets really buzzing. So we definitely did something right.”

Patrick Marleau and Evgeni Malkin scored for Pittsburgh and Tristan Jarry finished with 30 saves but the Penguins capped a miserable weekend at home by losing for the second time in 24 hours to teams they're scrapping with for positioning in the crowded Metropolitan Division.

Pittsburgh headed into Saturday with some momentum after wins over Ottawa and Buffalo halted a six-game losing streak that marked the franchise's longest in a decade. By Sunday afternoon the Penguins were reeling after getting manhandled by first-place Washington and following it up with a lethargic performance against one of the teams they are attempting to fend off for a playoff spot.

“It’s a tight league, that happens sometimes,” Pittsburgh captain Sidney Crosby said. “These last two games, you look at (the Capitals) game, a few mistakes early on gets us behind the 8-ball and then today just a short span in the second period, they tie it and get the lead. We’re talking about small things here.”

Small things that are leading toward big problems for the Penguins, who have dropped 8 of 10 and are as close to missing the post-season as they are first place in the division with less than a month to go in the regular season.

“We're obviously not thrilled with the position we're in over the last few weeks," Pittsburgh coach Mike Sullivan said. "We all have to take ownership for it and now we have to take responsibility to pull ourselves out of it.”

The Hurricanes, by contrast, appear to be heading in the other direction. Just 24 hours removed from an overtime victory over the New York Islanders, Carolina backed it up by drilling Pittsburgh in the first of four meetings between the teams over the next three weeks.

“We got one on them," Williams said. "The next three are going to be just as important."

The 21-year-old Geekie — born in July 1998, nine months after the 40-year-old Marleau reached the NHL as a teenager with the Sharks — redirected a point shot from Gardiner to tie the game 9:52 into the first. He capped a five-goal run by the Hurricanes when he beat Jarry for a second time with 3:41 to go to send the 609th consecutive sellout crowd at PPG Paints Arena to the exits.

NOTES: Geekie is the second player in Carolina history to score twice in his NHL debut, joining Brad Defauw, who did it on March 10, 2003. ... Penguins D Kris Letang played in his 807th game with the franchise, passing Jaromir Jagr for fourth place on the team's career list. ... Pittsburgh put F Evan Rodrigues back in the lineup a day after making him a healthy scratch. F Sam Lafferty replaced Rodrigues as a healthy scratch. ... Hurricanes D Nino Niederreiter became the fourth Swiss-born player to appear in 600 NHL games. ... Pittsburgh dropped to 6-8 on the second day of back-to-back games. ... The Penguins were 1 for 7 on the power play. The Hurricanes were 1 for 4.

Hurricanes: Continue their five-game road trip on Tuesday against Detroit.

Penguins: Start a three-game road swing — all against Metropolitan Division opponents — on Tuesday in New Jersey.