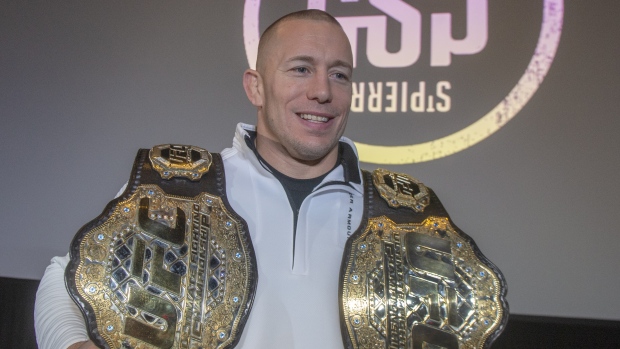 The possibility of Georges St-Pierre fighting current UFC lightweight champion Khabib Nurmagomedov is something UFC president Dana White says he would be interested in talking about if a title fight with Tony Ferguson is not able to come together.

White told TMZ Sports that Ferguson challenging Nurmagomedov for the belt is his top priority, but given the number of times they’ve tried to put the matchup together already, he’s not closing the door on other potential fights.

“Tony Ferguson is the fight that needs to happen, we’ve tried to do it four other times so hopefully we can get it done this time,” White told TMZ. “That’s the fight that makes sense. Tony’s had opportunities before that he didn’t take, so if he doesn’t, I would be interest in talking about GSP.”

The matchup between Khabib and GSP is one that has been of continued interest to both fighters.

Prior to his bout against Dustin Poirier at UFC 242, Nurmagomedov explained to TSN why he was interested in fighting GSP.

Following UFC 242, Nurmagomedov’s manager Ali Abdelaziz told TMZ that they were planning to fight GSP next and not Ferguson.

In July, St-Pierre joined TSN Radio during a Montreal Alouettes game and said that if he had the chance to return to the Octagon against anyone, it would be the UFC lightweight champion.

GSP : My legacy match would be against Khabib

The incomparable Georges St-Pierre joined Rick Moffat and Marc Olivier Brouillette during the 2nd quarter to talk about his pregame speech to the Als, and his dream opponent.

“If I want a legacy fight, Khabib is the man to beat right now, he’s the best fighter in the world,” St-Pierre said. “He’s undefeated and he hasn’t shown any kind of weakness. No one has ever even been close to solving the puzzle and that’s why it was very interesting to me.”

When he retired from the sport in February, St-Pierre mentioned the UFC’s reluctance to book a fight against Nurmagomedov as one of the reasons.

The Canadian MMA legend last fought in the UFC when he defeated Michael Bisping to capture the middleweight title at UFC 217 in November of 2017. St-Pierre would eventually vacate the middleweight belt that December due to suffering from ulcerative colitis and not wanting to hold up the division.

It was GSP’s first fight in four years, returning after his final defence of the welterweight belt at UFC 167 in November of 2013 against Johny Hendricks. After that defence, he voluntarily relinquished the belt to take a break from the sport.

Nurmagomedov remained undefeated, earning his 28th professional victory with a rear-naked choke over Poirier in the main event of UFC 242 in Abu Dhabi on Sept. 7.

The 30-year-old was returning from a nine-month suspension stemming from a post-fight incident following his UFC 229 win over Conor McGregor where he left the cage to confront members of McGregor’s team.