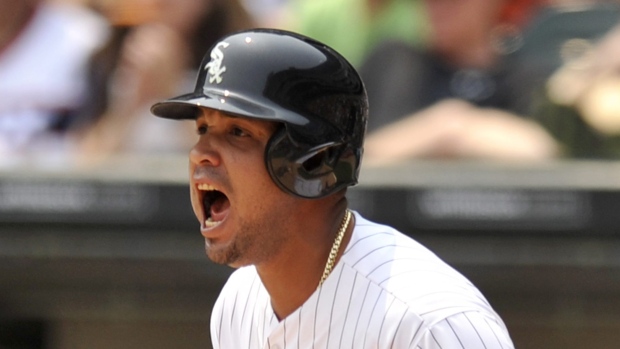 CHICAGO - The last-place Chicago White Sox got the big hit. Then they got the big catch. Now they've won four straight.

Avisail Garcia robbed Chris Davis of a tying home run with a leaping catch in the ninth inning, and the White Sox held off the Baltimore Orioles 3-2 on Saturday.

Garcia slapped his glove after making the sensational grab.

"I was playing no doubles because they have a power hitter," Garcia said. "I was playing close to the fence, so I had a chance to get it. So I got it."

J.B. Shuck put Chicago in front with a pinch-hit double in the eighth. Gordon Beckham scored the go-ahead run after he walked and advanced on a sacrifice bunt against Bud Norris (2-8), just demoted to the bullpen. Shuck doubled to right field off Darren O'Day.

David Robertson earned his 18th save in 22 opportunities — with a huge assist from Garcia. The right fielder jumped and reached behind him over the wall to take a home run away from Davis with one out in the ninth.

"Anytime he makes contact you're worried it's leaving the field," Robertson said. "I was just overjoyed to see him catch that ball and come back with it. It was awesome."

The Orioles also thought Davis' drive had a good chance to leave the park.

"Right off the bat, you see the ball go up, and we thought it was gone," Baltimore third baseman Manny Machado said. "But he went out there and made a hell of a play."

Machado hit a two-run homer to tie it at 2 in the eighth. He connected against Zach Putnam (2-3), who replaced Jeff Samardzija after he walked the previous batter. The home run ended Baltimore's scoreless streak at 26 2-3 innings.

Samardzija struck out nine and allowed a run and three hits in 7 2-3 innings. Ryan Flaherty singled with two outs in the sixth for the Orioles' first hit. He hit the ball up the middle on Samardzija's first pitch.

"My mechanics have come around and I feel comfortable with what I'm doing out there, which means we can execute the pitches instead of having to worry about what you're doing above the rubber," Samardzija said.

Jose Abreu scored two runs and had a double and triple for the White Sox, who have won eight of 12 after losing eight straight. The Orioles have lost five of six.

Garcia's RBI single put the White Sox ahead in the first inning.

Abreu led off the fifth with a triple and scored on Cabrera's sacrifice fly.

Machado drew a leadoff walk in the first for the Orioles' lone baserunner through the first five innings.

"I thought I had given up one (hit) to Machado there in the first. But it was a walk, apparently," Samardzija said. "But, hey, something was going on when the fans started getting all rowdy for popup outs. I felt good. That's something you want."

Orioles RHP Kevin Gausman (1-0, 3.09 ERA) will remain in the rotation and start Tuesday against Minnesota. Norris was moved from the rotation to the bullpen. Gausman struck out seven in 6 1-3 scoreless innings against Texas on Thursday after he was recalled from Triple-A Norfolk.

GOOD TO SEE YOU

Former White Sox closer Bobby Jenks, a member of the 2005 World Series champions, threw out the ceremonial first pitch on a day when the team gave away his bobblehead to fans. Jenks confirmed he has retired after battling back issues and last pitching in the majors in 2011. "I gave it a run," he said. "It's just too much pain off the mound."