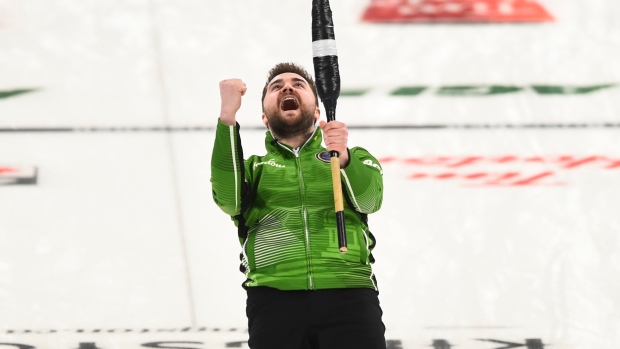 Simply put, the 2020 Tim Hortons Brier was one of the greatest Canadian men’s curling championships in history.

With a stacked field that needed two dramatic tiebreakers just to figure out the final four plus engaging crowds all-week-long, some say the Kingston Brier was the greatest of all-time.

The thing that made this Brier extra special was the superb shot-making. It seemed every day was highlighted by a jaw dropping pistol that could have easily been argued as the best of the tournament.

With the sports world coming to a halt, let’s look back at the spectacular shots from those 10 days at Leon’s Centre and find out which one is truly the best. Have your say below in the poll!

If you weren’t well aware of Matt Dunstone coming into this year’s national championship, you definitely are now.

The 24-year-old, two-time Canadian junior champ made just his second appearance at the Brier in Kingston earlier this month, and first as a skip. The end result was terrific as Dunstone led Saskatchewan to their first playoff appearance since 2015 and the fourth since 2000. It ended with a semi-final loss to Brad Gushue, but the journey to get to that point sure was fun.

Things didn’t start great for Dunstone and company as they dropped their opener against Wild Card before needing a comeback to defeat lower-ranked New Brunswick. They were in a similar boat in their third game, a Draw 6 matchup against British Columbia.

Saskatchewan held the hammer in the 10th end, but were trailing by three, usually an insurmountable task for curlers at this level. However, after a couple misses from Jim Cotter, the door opened for Dunstone to make a short runback triple to score four and steal the win.

Dunstone had the heat to execute the shot, it was just a matter of whether the rocks would cooperate and slide out. The sweepers didn’t need to touch the Winnipeg native's stone until third Braeden Moskowy put brush to ice and convinced BC’s last rock out of the rings to pick up the improbable win.

The only thing better than the shot was Dunstone’s celebration afterwards. But, was it the best of the week?

In the first end of a Draw 8 matchup against Brad Gushue of Newfoundland and Labrador, Northern Ontario skip Brad Jacobs looked to be lying one with Gushue having second and third shot. There was probably a precise draw for two to be had, but with Northern Ontario sporting a 1-2 record coming into that Monday night clash, the team from Sault Ste. Marie decided to make some granite move.

With a lot of rocks in play for a first end, Jacobs saw a long angle-raise, which if hit correctly, would knock out Gushue’s two stones and score four.

Jacobs made it flawlessly as Northern Ontario took a commanding 4-0 lead. Unfortunately things turned sour quickly for Team Jacobs after the highlight reel shot as Gushue took three in the next end before eventually winning 7-6 to hand Northern Ontario their third loss in four games to start the Brier.

This one can simply be described as the Manitoba Miracle.

Things were looking bleak for Team Gunnlaugson as they readied for their last toss in Draw 9 against Prince Edward Island. Bryan Cochrane and Islanders were sitting pretty with a two-point lead and a shot stone on the button.

The flame throwing Gunnlaugson, who become a star in Kingston in his first Brier appearance, saw there was a shot for the win. Manitoba needed to runback PEI’s yellow rock into their red in the top 12-foot which would hopefully take out their opponent’s shot stone on the button as well as PEI's stone in the back four without jamming on their own.

It’s probably easier if you just watch it again for yourself.

TSN curling commentator Cathy Gauthier simply said "Oh my God," after the shot was made as Gunner jumped for joy and hugged his teammates in euphoric celebration.

Manitoba scored three to pick up the 9-8 win.

Trailing 2-1 to Mike McEwen’s Wild Card rink, the defending champs faced three opposing shot stones with their last in the 10th end. Koe could have made the draw for one and send the game to an extra but decided to go for the win.

McEwen’s three rocks were almost perfectly lined up diagonally, giving Koe the chance for a triple thanks to his ability to throw the big-time weight.

The 45-year-old fired it, whisking the first one just enough to push it out before doing the same with the next two.

Triple to score two and the slim 3-2 victory. Just another day at the office for the cold-blooded skip.

It was Draw 14, the last game of the round robin and Ontario’s Team John Epping had their backs against the wall.

After winning their first three games of the Brier, Team Epping dropped three consecutive, meaning they needed a win against Northwest Territories to punch a ticket to the championship round.

A doable task, but Jamie Koe and the territories had won their last two coming in and all of a sudden took a 5-1 lead after four ends over Team Epping, the hometown rink.

However, Epping had a shot lined up to turns things around.

"Well they need something here," said TSN’s Vic Rauter as the rock slid down the ice. "They need to generate something more than points. Some excitement."

The skipped nailed the long angle raise takeout to pull Ontario within one in a must-win game.

"Something like that! Oh, he’s back! Johnny EPIC!" yelled Rauter after Epping made the shot for three.

Ontario would go on to win the game and played well in the championship round to qualify for a tiebreaker where they eventually were eliminated by Northern Ontario.

Call this one Dunny is Money: Part Two.

Saskatchewan and Manitoba were battling in a crucial match in Draw 3 of the championship round. Each prairie province needed to win badly as a loss for Manitoba would eliminate them from playoff contention.

In the last end, Manitoba led 8-7 without hammer, but had shot stone frozen on the button. Despite, a nicely played end, Dunstone still had a chance for the Hail Mary.

The skipper, throwing high heat once again, hit his own in the top four-foot just enough to raise it into Manitoba’s shot stone and score two for the 9-8 victory.

Another epic game-winner was followed by another epic celebration as Saskatchewan were going to the Brier playoffs.

It was the Battle of Ontario in the second final tiebreaker as John Epping and Brad Jacobs went head-to-head with a spot in the page playoffs on the line.

With the game tied 1-1 in the fourth end, Ontario had a stone buried on the button with one shot remaining from their provincial rivals. The only way to get to it was a long runback to score three.

Jacobs made it to perfection, giving Northern Ontario a commanding 4-1 lead, taking a major step towards another playoff appearance at the Canadian championship. 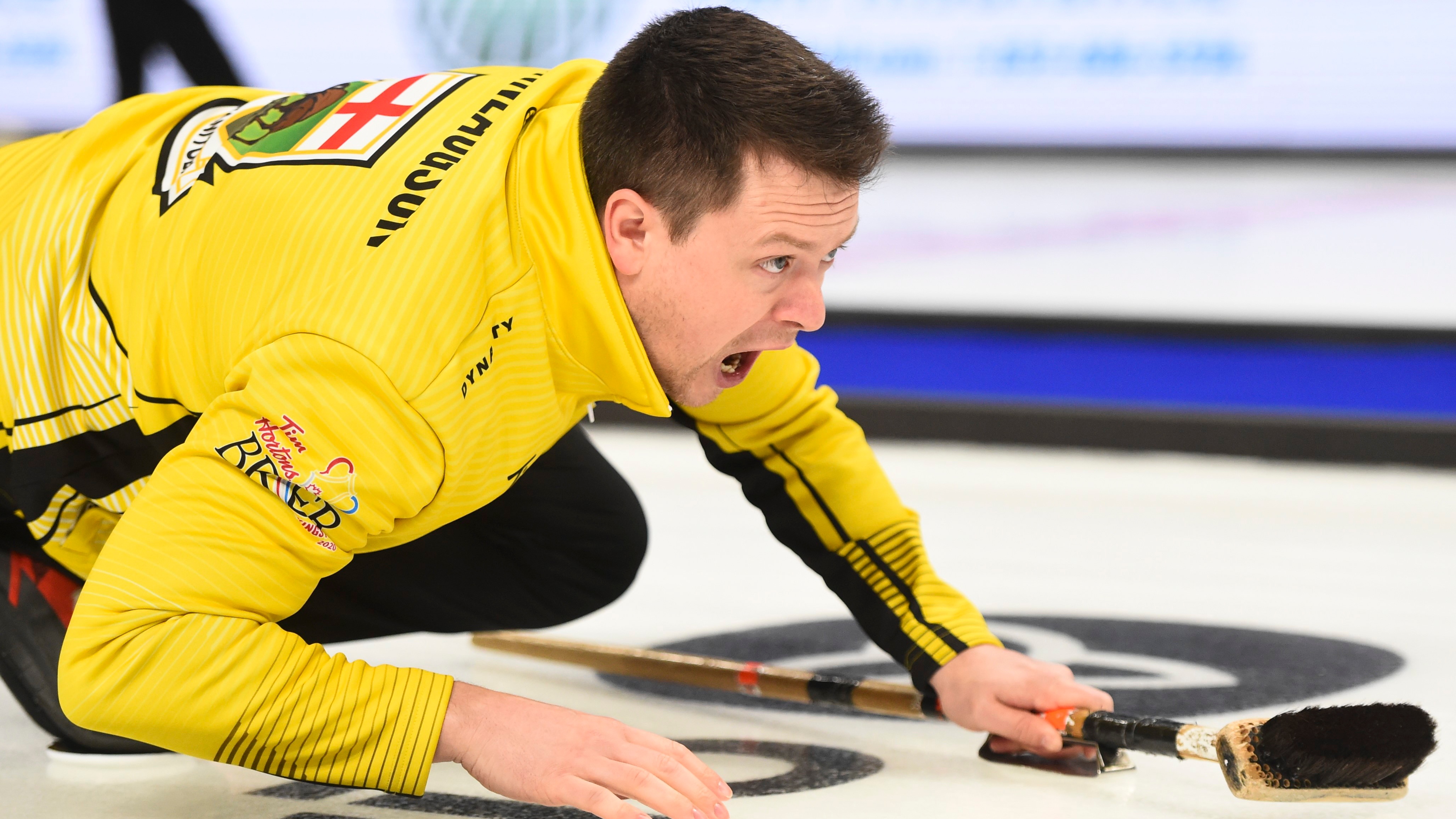 What was the best shot from this year's Tim Hortons Brier?