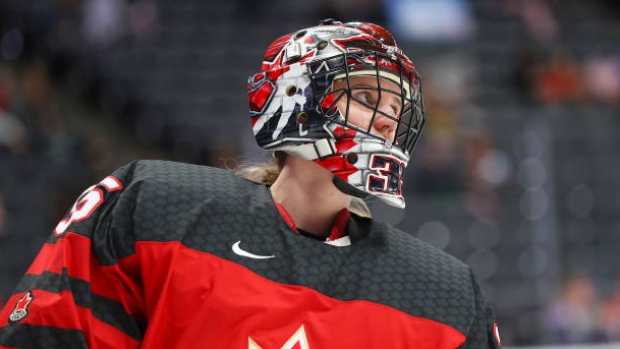 For the Canadian national women’s hockey team, the goaltending position had been solidified for decades.

In the 2000s, Hockey Hall of Famer Kim St. Pierre helped lead Canada to its first Olympic gold in Salt Lake City in 2002 and again in 2006 at Turin. She picked up her third Olympic gold in 2010 as the backup in Vancouver. St. Pierre also won five Women’s World Championships during her illustrious career.

In the 2010s, Shannon Szabados picked up the goaltending torch, backstopping Canada to Olympic gold in Vancouver (2010) and Sochi (2014) and earned silver in PyeongChang in 2018. She also led Canada to its last Women’s World Championship gold in 2012.

Canada’s goaltending depth has also extended beyond the No. 1 position over the years, with the privilege of having the likes of Sami Jo Small and Charline Labonté as backup goaltenders over the years.

However, with Szabados having stepped back from playing after giving birth in August 2020, the No. 1 goalie job for Canada is wide open for the first time in years.

Ann-Renée Desbiens, Emerance Maschmeyer and Kristen Campbell were announced on May 12 as the goalies who will centralize with Team Canada for the Beijing Olympics and will suit up for the 2021 IIHF Women’s World Hockey Championship in Calgary starting Aug. 20.

With the exception of national team camps and the recent 2021 Secret Cup, Team Canada’s players have not faced much competition since the COVID-19 pandemic hit in March 2020. Despite the lack of playing time, Hockey Canada goaltending coach Brad Kirkwood is confident in the goaltending trio heading into the Women’s Worlds.

“It’s a position that, to be honest, would probably be affected the most with the layoff, you know just the reads and speed, timing, things like that,” said Kirkwood. “It’s tough to replicate in skills and goalie sessions but they all looked really, really good.”

In what is one of the most pressurized positions in all of sports, these three players are tasked with helping Canada break an almost decade-long gold medal drought.

Meet the goaltenders who will be representing Team Canada:

While it was initially a bit of a surprise to see veteran Geneviève Lacasse left off the centralization roster, it is not shocking that Campbell earned her place as one of the three goaltenders for Canada.

“It was an honour being named,” said Campbell. “I was super excited, I think it was something I, obviously, I’ve been working towards my whole career and had the mentality coming in that’s where I wanted to be on that day, is on the team.”

At 23, Campbell is the youngest of the three goalies but comes in with an impressive resume.

Beginning her NCAA career at the University of North Dakota, she red-shirted her freshman year and was forced to transfer to Wisconsin in 2017 when North Dakota dropped its women’s hockey program.

In 2018-19, she backstopped the Badgers to their first national championship since 2011, posting a .940 save percentage and 1.03 goals-against average in 41 games with 11 shutouts.

In March 2020, the remainder of the NCAA season was cancelled, including the Frozen Four, robbing Campbell the chance to go back-to-back with Wisconsin.

Campbell has yet to play a game with the senior national team as her only experience with Team Canada was in 2015 at the IIHF World Women's U18 Championship, earning silver.

She spent the COVID-19 pandemic training in Calgary, which allowed to spend time developing her game one-on-one with Kirkwood. He has cited her size and ability to get in the shot lane as two of her biggest strengths.

“Campbell’s been great to be honest,” said captain Marie-Philip Poulin. “Her work ethic is something that’s very unique. She comes to the rink, she’s still on the ice after practice for us to shoot even when she’s tired.

“The teammate that she is, obviously we just started centralization, but that’s something that I really look forward to get to know her even more.”

Size, power and puck play are just a few attributes Kirkwood listed off when describing Desbiens.

And she has put all of those things together to build a strong case to be Canada’s No. 1 goalie.

The La Malbaie, Que., native made her international debut with Canada at the IIHF World Women’s U18 Championships in 2011, earning silver.

Desbien has only appeared in one Women’s Worlds for Canada, but her two shutouts in three games at the 2015 World Championship en route to a silver medal made a strong impression.

The 27-year-old was one of three goaltenders selected for the 2018 PyeongChang Olympics. Her lone Olympic appearance was an 18-save shutout against the Olympic Athletes from Russia in the opening game as Canada went on to take home silver.

After four seasons at the University of Wisconsin, Desbiens holds the NCAA records for career shutouts (55), goals-against average (0.89) and save percentage (.955). In 2017, she won the Patty Kazmeier Award as the top collegiate women’s hockey player.

In 2018 after the Olympics, Desbiens took a break from hockey but returned in 2019.

Maschmeyer comes in as the most experienced of the three goaltenders and boasts the best international stats with a 1.49 goals-against average and .931 save percentage in 21 appearances for Canada.

Her first experience with Team Canada was at the 2012 IIHF Women’s World U18 Championship in the Czech Republic, where she helped Canada win gold with a sparkling .984 save percentage and 0.33 GAA.

In her first tournament with the senior national team, she earned silver in 2015 at the Women’s Worlds but did not play any games.

Maschmeyer, however, really burst onto the scene in 2016 with a strong World Championship where she was named best goaltender at the tournament with a .956 save percentage and 1.25 GAA in another silver medal effort for Canada.

The 26-year-old ran into some adversity in her career when she was pulled in Canada’s first-ever loss to Finland at the 2017 Women’s Worlds after letting in three goals on 11 shots. She was then cut from the roster for the PyeongChang Olympics.

She has since bounced back and at the 2019 Women’s Worlds in Finland, Maschmeyer appeared in three games, recording a .923 save percentage and 1.52 GAA as Canada earned bronze.

Kirkwood points to Maschmeyer’s skating ability and technical game as her greatest strengths.

“She’s probably technically one of the best in the game,” said Kirkwood. “World Championship, she showed that she belonged there in 2016 so she’s played on a big stage and come up big for us as well.”