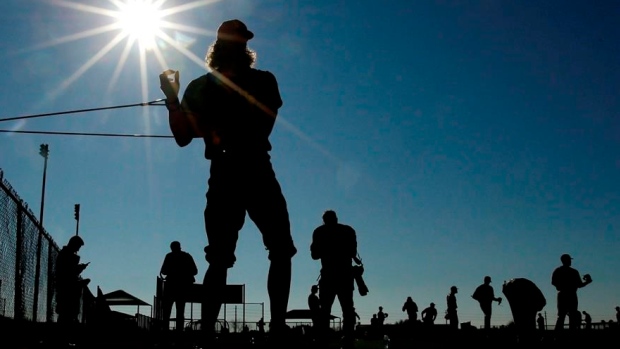 PEORIA, Ariz. — A week ago, San Diego Padres outfielder Wil Myers did not expect to start spring training in Arizona.

Already traded twice in his career, Myers figured he would be in Florida after another deal.

“It seemed extremely real at that given moment,” Myers said.

But after a winter of rumours, Myers arrived in the Padres' camp Saturday with no hard feelings, a $20 million salary and a new approach that he believes will help him return to previous production levels.

"We’re just here to play, and wherever they decide to play me or whatever team it is, that's just the way it goes,” he said.

After hitting 58 homers and stealing 28 bases in 2016-17 while becoming an All-Star, Myers suffered arm, oblique and foot injuries that limited him to 83 games in 2018. He lost playing time last season when hit 18 homers, stole 16 bases and had a five-year low in OPS at .739.

He knows things must improve.

“I understand that throughout the life of my contract, I haven't been great here,” Myers said.

“But it only takes one good year to flip that. I'm excited for the season excited to get going and looking forward to kind of flipping that script,” he said.

Myers twice met with Padres coach Damion Easley in the off-season in North Carolina, and he also hit with former major leaguer Tony Womack. Without getting into specifics, Myers said adhering to a consistent approach is a goal.

“I mean, I definitely have the ability to play really well at times, but also had the ability to not do that all the time,” he said. “I found some things that I feel will make me a lot better will make me more consistent. It’s solidifying that and then, no matter what kind of day it is, sticking with that. I like where I'm at right now.”

Myers, 29, has played all three outfield positions and both corner infield positions since joining San Diego in 2015. He is expected to play right field this season will spend the majority of his time this spring there, manager Jayce Tingler said.

“He had a great off-season in North Carolina, and just excited to see him take that indoor game and the things he was working out here,” Tingler said.

“I think he recognizes at times he needs to be held accountable, and like most good players usually the answer is pretty simple. So maybe eliminate some noise, eliminate some thought and stick to one or two things when he steps in the box. Let’s keep things pretty simple and go from there,” he said.

Myers is in the forth year of a six-year, $83 million contract that was heavily backloaded, a reason the Padres could consider a trade.

After making a total of $22 million including a $15 million signing bonus starting in 2017, Myers will earn $20 million in each of the next three seasons. He has a $20 million option for 2023 that includes a $1 million buyout.

“I understand how baseball works,” Myers said. “I'm here now and that's all that really matters. ... You have to put your feelings aside. I had to focus on myself this off-season getting better for me.”