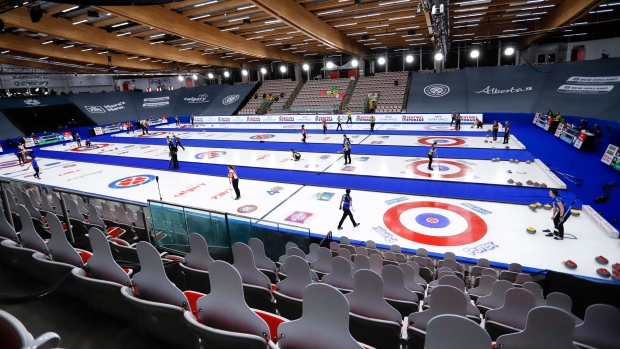 Add a fresh round of debate to a Canadian curling scene that has had no shortage of juicy storylines of late.

The oft-discussed wild-card setup at the national championships took centre stage again Monday with the release of updated rankings that appeared to determine the play-in game matchup at the Scotties Tournament of Hearts.

Nothing has been finalized yet by Curling Canada, which is also expected to make a joint announcement with the Canadian Olympic Committee this week on who will wear the Maple Leaf in mixed doubles at the Beijing Games.

Add in a recent eyebrow-raising decision from the Ontario Curling Association (CurlON) on its Scotties representative and all the drama bases seem covered.

Recent event cancellations — including the mixed doubles trials and several provincial and territorial championships — have stirred the pot on what the national federation should decide for its playdowns.

Calls for Curling Canada to use three wild-card entries at the Scotties and Tim Hortons Brier for a second straight year have grown louder of late due to the limited competition options.

But if the current setup holds, Chelsea Carey will take on top-ranked Tracy Fleury in the play-in game Jan. 28 at the Fort William Gardens in Thunder Bay, Ont.

Carey leapfrogged Homan and Hollie Duncan in the latest rankings after earning points at the Saskatchewan playdowns last week. Totals for Homan and Duncan remained unchanged after the cancellation of the Ontario event.

"Seems like a good year to have three wild-card teams at the Scotties (and) Brier to be fair," tweeted Wayne Middaugh, who skipped for an injured Glenn Howard on the 'Wild Card Three' team at last year's Brier.

With the Scotties set to begin Jan. 26 and Olympic play to kick off Feb. 2, the clock is ticking.

When asked about the wild-card situation and whether changes might be considered, a Curling Canada spokesman said via email the subject was "being sorted out today" and an update would be forthcoming.

"I don't agree with it being only two teams because of provincials and the way everything went down," she told The Canadian Press. "I think it should be what they did last year."

The wild-card format, which replaced the unpopular four-team qualification system, was first used in 2018.

The two highest-ranked teams not already qualified through provincial/territorial playdowns meet in a loser-goes-home showdown.

"It would be unethical to alter the rules after the fact (now) for who is in that wild-card game," veteran skip Mike McEwen said on Twitter. "But I’m not saying the rules/formats are fair given circumstances teams/provinces face. Reinstating 3 Wild Cards at women’s and men’s nationals is the most equitable solution."

Any potential change would require a new draw. The Scotties play-in game team entries remained vacant on the competition website Monday and the Canadian Team Ranking System (CTRS) standings were not updated.

However, the Canadian rankings — complete with updates from weekend play — were available Monday on the World Curling Federation website.

"CTRS points cannot be awarded in provincials that were played and none awarded for ones that were cancelled due to COVID. That’s the tweet," Ryan Fry, who plays third on Team John Epping, said on Twitter.

Carey, a two-time Scotties champion, dropped a 7-5 decision to Penny Barker in the Saskatchewan final on Sunday.

"So I'm not even sure that it's better that we got to play. Everything is just a mess right now unfortunately."

Homan, meanwhile, has been provisionally named to represent Ontario. CurlON also decided that if she's named to the Olympic mixed doubles team with John Morris, that Duncan would go to nationals instead.

Part of the reason for Curling Canada's delay in naming the duo — the 16-team trials were cancelled Dec. 26 — can likely be chalked up to determining what might happen in the event of any COVID-19 wrenches over the next few weeks.

As for the wild-card format, the three-team setup was generally considered a hit at last year's national playdowns in the Calgary bubble.

Curling Canada said it made the change last year to ensure the "quality and integrity of the championships" when many teams did not have the opportunity to play down for berths due to the pandemic.

The schedule was essentially back to normal this season before the arrival of the Omicron variant. Many teams have been limited of late depending on cancellations and pandemic-related restrictions, which vary across the country.

About half the players confirmed for the Scotties were acclaimed for their spots.

Homan's four-player team earned over half of its points this season with solid showings at two Grand Slam events. A last-place finish at the Olympic trials in November proved costly.

The Brier is scheduled for March 4-13 in Lethbridge, Alta.