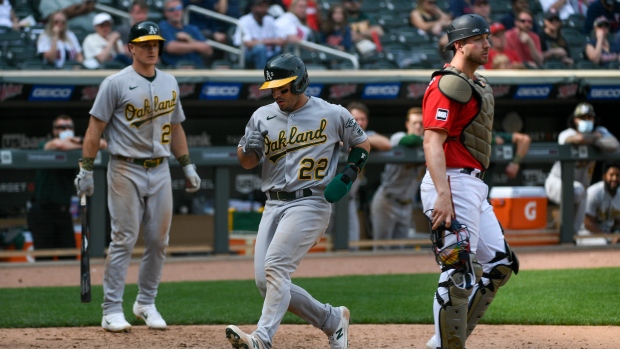 MINNEAPOLIS (AP) — Matt Chapman had three hits and three RBIs and Ramón Laureano scored the go-ahead run on a wild pitch in the ninth inning Sunday as the Oakland Athletics defeated the Minnesota Twins 7-6.

Laureano hit a one-out single off reliever Taylor Rogers (0-2) in the ninth. Matt Olson followed with a grounder back to the mound, but Rogers’ throw skipped off the glove of third baseman Josh Donaldson, who was covering second due to an infield shift.

Laureano advanced to third on the play and scored when Chapman struck out, as the third strike skipped to the backstop.

Lou Trivino (2-1) got four outs to earn the victory for the A’s, who went 4-2 on their trip to Boston and Target Field.

Andrelton Simmons tied it for Minnesota in the eighth with a two-out, two-run homer off reliever Jake Diekman.

Max Kepler homered, doubled and drove in four runs while Trevor Larnach had three singles for the Twins, who lost for the sixth time in seven games.

Bassitt entered the game tied for the AL lead with five hit batters, and the trend continued when he plunked two Twins in the second inning. After Trevor Larnach’s one-out single, Bassitt hit Miguel Sanó on the hand.

Kepler followed with his fourth home run of the season to put the Twins on top 3-1.

Bassitt then hit Willians Astudillo and walked Simmons, but Laureano bailed him out with a diving catch of Luis Arraez’s sinking line drive in left-center field.

Kepler drove in another run with a sacrifice fly in the third. Plate umpire John Libka initially ruled Jorge Polanco out at the plate on Laureano’s throw, but after review the call was reversed.

The A’s struck back with four runs in the fifth to take a 5-4 lead. Chad Pinder led off with a double and scored on Sean Murphy’s singles. Hits by Elvis Andrus and Mark Canha chased Maeda.

The inning hinged on an obstruction call against Twins catcher Ben Rortvedt, who bumped into Andrus during a rundown between third and home. That tied the game, and Chapman later drove in the go-ahead run with a sacrifice fly.

Oakland tacked on another run in the seventh when Chapman’s infield single scored Seth Brown.

Athletics: 1B Mitch Moreland (side) missed his second straight game. A’s manager Bob Melvin said his status would be re-evaluated after Monday’s off day.

Twins: Astudillo, who was hit on the hand by a pitch in the second inning, left the game after the third inning with a hand contusion.

Twins: LHP J.A. Happ (2-1, 4.26) will pitch for the Twins in Monday’s series opener against the White Sox at Target Field.