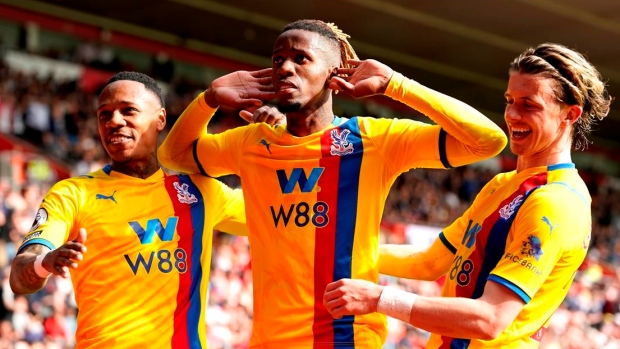 SOUTHAMPTON, England (AP) — Wilfried Zaha came off the bench to score a stoppage-time winner for Crystal Palace against Southampton in the English Premier League on Saturday.

Oriol Romeu gave Southampton an early lead but Eberechi Eze scored his first goal of the season in the second half and a moment of magic from Zaha saw Palace leave St Mary’s with a 2-1 result and all three points.

Patrick Vieira’s side moved above Southampton and within touching distance of the top half of the table with four left to play.

Romeu gave Southampton the lead in the ninth minute when he rose above Joel Ward at the far post to head a corner in off the crossbar.

With the primary objective of survival already achieved, the pressure was off both sides, making for an open game.

Palace looked the more threatening after the break and deservedly equalized when Jordan Ayew fed former Southampton defender Nathaniel Clyne and his deep cross was volleyed between Fraser Forster’s legs by Eze.

It was Eze’s first goal since tearing his Achilles last May, with the former QPR player having struggled to regain his place since returning from injury in November.

Zaha hadn't been fit to start but Vieira introduced him from the bench in the 64th minute and he struck the winner with seconds remaining, finding the bottom corner from the edge of the area.