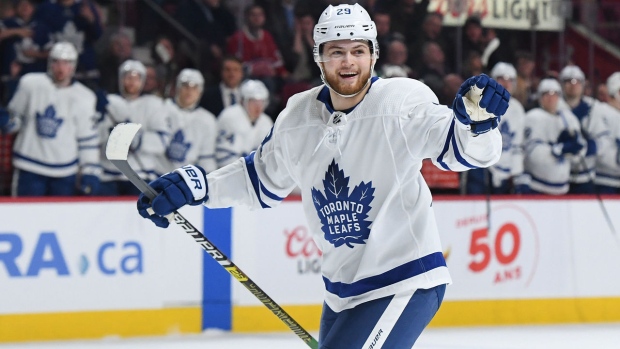 TSN Toronto reporter Mark Masters checks in daily with news and notes on the Maple Leafs, who  played a simulated game on Thursday at Ford Performance Centre.

While some of his teammates expressed trepidation at having to pack for Sunday's trip into the National Hockey League Phase 4 Secure Zone, William Nylander is unfazed.

"Yeah, I mean, you just got to pack your stuff and go in," the forward said nonchalantly. "I don't think it's that big of a deal. Will be ready to go when the time comes."

The Leafs are hoping this will be a long trip lasting all the way into late September and possibly early October when the Stanley Cup is handed out in Edmonton. The first step is checking into Toronto's Royal York Hotel this weekend.

"Just bring the stuff that I would usually bring," Nylander said of his approach. "Obviously a lot more stuff, but I think it will be pretty simple."

Often listed by teammates as one of the most fashionable Leafs, Nylander insists he hasn't given much thought to the lack of a dress code for games this summer.

"I'm not too worried about that," he said. "We're getting ready to play important games."

Nylander rarely gets rattled, which made last year's rough ride – seven goals in 54 games – following a prolonged contract stalemate so jarring. But the Swede bounced back in a big way during the 2019-20 regular season scoring 31 goals in 68 games. And, based on what we’ve seen so far at training camp, he's still feeling it.

"Willie is Willie," observed linemate Auston Matthews. "It looks like he picked up where he left off when the season went on pause. He's skating well. He's got his long hair flowing in the wind when he's skating up and down the ice. He's playing with confidence and that's always a good sign when it comes to him."

Nylander, by the way, didn't get a haircut during the entire regular season or throughout the pandemic pause. It wasn't about superstition or style, for that matter.

"He looks like a real Swede now," said good pal Kasperi Kapanen a few days ago.

Although Nylander did get a trim early in training camp.

"I've cut it now for the remainder of the bubble time," the 24-year-old said.

Nylander looks and sounds like a guy ready to roll.

"I feel pretty great," he said. "We want to get back into playing real games, which will be soon. That will tell how the off-season has been going."

Sheldon Keefe has moved Nylander around at camp, playing him with centres John Tavares and Auston Matthews. He even had Nylander at centre on a line with Ilya Mikheyev and Adam Brooks in one scrimmage. The head coach hasn't noticed Nylander play much differently regardless of the spot.

"When Willie's at his best he's able to complement others but also help drive and make others better," Keefe noted. "I like him in any of those situations and I'd say, similarly, even if he plays outside of those guys he's able to do things well. Will's capable of adapting and adjusting to his linemates, but also helping to make them better."

Nylander says his goal is to be "dominant" in the playoffs and prove himself on the big stage. Thursday’s scrimmage, which saw his line go up against the Tavares line, was another positive step forward.

"We were able to make it more game-like," Nylander noted. "Obviously, it's hard when you're practising and scrimmaging to keep everything game-like, but today was pretty good. We had a tough start to the game, but we got going as the game went on. That's what we needed to have, because we'll be playing against the best guys on Columbus."

From @markhmasters: What a difference a year makes.

William Nylander discusses how he wants to carry his regular season success this year into the play-in round after a forgettable 2018-19 campaign - https://t.co/MQCQVHCqc9#TSNHockey pic.twitter.com/KBPdBlgzNm

Thursday’s scrimmage consisted of two 20-minute, stop-time periods and started at 4 p.m., which is when Game 2 against the Jackets will be played. The players wore game sweaters and there was a full intermission and ice resurfacing after the first period as well as 'television timeout’ breaks in the regular spots.

With Team Matthews clinching its scrimmage series against Team Frederik Andersen on Wednesday, the groups were shuffled. For the first time, the two top lines went head-to-head with Mikheyev, Tavares and Mitch Marner getting the better of Nylander, Matthews and Zach Hyman.

Mikheyev scored a hat trick and added two assists in the 6-3 win for Team Blue.

"He was excellent," said Keefe. "He probably, more so than anybody, is really excited and happy to be back here playing in a team environment. It's been a long road for him to get back to playing in game action. He had a little extra jump all throughout this and that was really great to see. I thought today was his best day as well."

Hats off to Souperman 🧢🧢🧢#LeafsForever pic.twitter.com/QoGbiNaDXK

Mikheyev has been sidelined since a skate blade lacerated his right wrist on Dec. 27 leading to surgery to repair an artery and tendons.

The assembled media at the Ford Performance Centre were asked to vote for the team's Phase 3 most valuable player and Mikheyev came out on top. It wasn't just a sentimental pick.

"He looks good," said Matthews. "He looks really, really good. He's taken a lot of steps, obviously, with that pretty gruesome injury he had. He really worked hard to get back into game shape, skating all this time since the season went on pause so he's looked really good and I think he'll be a great asset for our team."

Mikheyev looked comfortable while playing alongside Tavares and Marner early in the season picking up 23 points in 39 games. After fellow left winger Andreas Johnsson joined Mikheyev on the long term injured list in February, the Leafs struggled to fill the void in the top six. Johnsson is still out after undergoing knee surgery in February so getting Mikheyev back and up to top-six speed is crucial.

"He and his line I thought were really good," said Keefe. "They were playing with lots of pace and making lots of plays and seemed to have great chemistry throughout so that was a really good piece. It obviously means a lot to our team. It was a big hole in our lineup when he left. He and Andreas Johnsson both, at the same time, to leave the lineup were big holes and to have one of them back here is a great boost for us."

After spending the last couple practices and scrimmages on a line with Alex Kerfoot and Kapanen, Nick Robertson got a look on Toronto’s fourth unit in Thursday’s simulated game skating alongside Kyle Clifford and Jason Spezza.

“He's a focused individual," said Clifford. "You can tell he wants to be here and be a part of what we're building and I really like his game. He has a really good shot and he's tenacious on the forecheck. There's no give-up in his game. It was fun to play with him today."

Keefe remains undecided about whether the 18-year-old will make his NHL debut in Game 1 against Columbus.

"The exhibition game will really help us refine things a little bit," Keefe said. "I’ve really liked the progression that he’s shown. There are other things at play here, of course there’s his play, his development through all this and then there's also decisions to make on the other players who've played for us up until the pause. Then making a decision based on all those factors on what's going to help us best prepare to win Game 1."

Pierre Engvall returned to his usual spot alongside Kerfoot and Kapanen in Thursday’s scrimmage, picking up a goal. Frederik Gauthier ended up on a Marlies line with Nic Petan and Egor Korshkov​.

The Leafs will play their lone exhibition game on Tuesday against the Montreal Canadiens.

The possibility that Nick Robertson will make his #NHL debut in the playoffs is getting more and more real with every passing day at Maple Leafs training camp.

Keefe singled out Kapanen for making the most progress in the last few days of camp.

"Kappy would be the one who stood out to me in that area," Keefe said. "If I look at his progression through the first three days of camp ... Kappy has really raised his level. The way that he's played the game in terms of using his speed, getting on the puck just having second and third efforts on the puck, those are the kind of things we need to see from him. He's a real difference maker for us when he does that and I've been happy to see that, it’s a real positive sign for us."

On Wednesday, Kapanen credited Clifford for inspiring him and bringing out the feisty side of his game, which is a key ingredient in his success. The pair formed a fast friendship since Clifford was acquired in a February trade with the Kings.

"He's a guy that probably doesn't get all the credit that he deserves just because of the amount of stars we have here,” Clifford said, "but I think he's a tremendous player and when we have team success is when Kappy's at his best."

Kapanen on Kyle Clifford: "When you see a guy play hard & fight every now & then it fires me up for sure so it's been a positive impact for me"

Mitch Marner on Kasperi: "He's got a fire under him"https://t.co/DM8WiijSw4