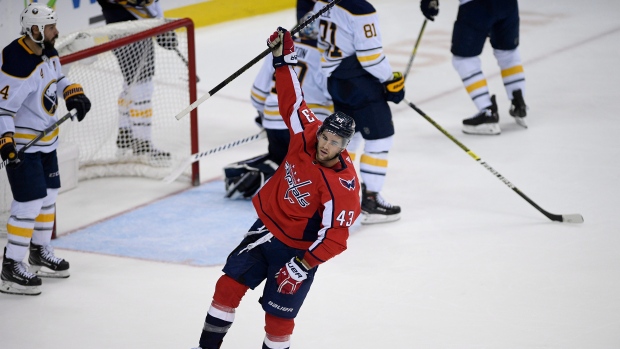 WASHINGTON — Braden Holtby and Tom Wilson gave the Washington Capitals another two points in the standings.

Evgeny Kuznetsov started the winning play when he stole the puck from goalie Carter Hutton behind the net. The centre quickly fed Wilson just outside of the crease. Wilson has 10 goals in 15 games this season.

"Whenever the goalie is behind the net, you just try and get open, just in case," Wilson said. "(Kuznetsov) makes a great play, and you've just got to try and get it there before the goalie gets back in the net. It was good timing."

Still, the Capitals needed Holtby as Buffalo held a 37-24 edge in shots. The Sabres had 17 third-period shots, and Holtby made 16 saves in the final 20 minutes and came up big at the end

Washington was under pressure late as Nic Dowd was called for tripping with 2:12 left in the game. The Capitals then spent most of the final two minutes killing off that penalty, dealing with a six-on-four situation for nearly a minute as Buffalo pulled Hutton in favour of an extra attacker.

"(Holtby) was a big reason we were able to get two points tonight," Washington coach Todd Reirden said. "He was outstanding all game long. He had a huge role in us winning that game."

Holtby made a big play late in the second period by coming far out of his net to beat Rasmus Ristolainen to a loose puck and prevent a breakaway.

The goalie raced out past the circle to nearly the blue line and even swatted the puck away from Ristolainen and Buffalo teammate Conor Sheary.

"I thought I could get there," Holtby said. "I was thinking I'd kind of have to get down to try and seal the ice and get it out of the blue line there. I didn't really see the second guy coming so after that you just try and do whatever you can to keep it up."

The first period was scoreless, and Buffalo could not convert on three good scoring chances in the first 1:30 of the second.

The Sabres then went on a power play 2:37 into the period, but Washington scored 13 seconds later with its second short-handed goal of the season. Dowd flipped a puck in the air from the Capitals' zone that sprung Chandler Stephenson on a breakaway, and he beat Hutton for his first career short-handed score.

Johan Larsson tied it for Buffalo at 9:01 of the third period, scoring from in close.

Buffalo coach Phil Housley thought his team played well and came up with many scoring chances but agreed that Holtby might have been the difference.

"Holtby played terrific," Housley said. "Give Holtby credit. He's a pretty good goaltender, and there's a reason why he won the Stanley Cup."

NOTES: Andre Burakovsky returned to the Washington lineup after missing the past four games as a healthy scratch but did not score a point. ... Housley played two seasons for Washington. ... Jack Eichel and Jeff Skinner of Buffalo had seven-game points streaks end.

Capitals: At Ottawa on Saturday night.