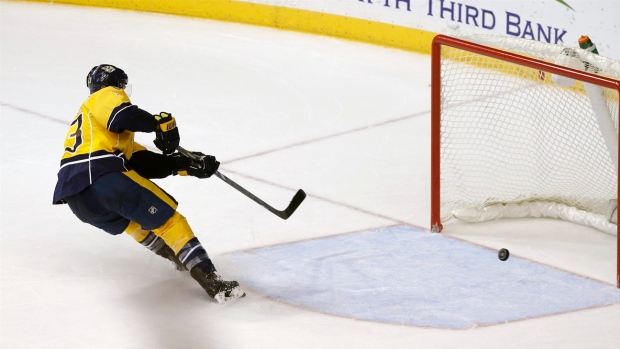 NASHVILLE, Tenn. - The Nashville Predators have the power and they know how to use it.

Colin Wilson scored two goals, while Filip Forsberg and Mike Fisher each scored a goal to help lead the Nashville Predators to a 4-1 win over the Philadelphia Flyers on Saturday night.

Philadelphia captain Claude Giroux had the lone goal for the Flyers, who had their three-game winning streak snapped.

Three of Nashville's goals came on the power play, and the Predators killed off a long Philadelphia 5-on-3 at the start of the second.

"Our penalty kill was awesome," Forsberg said. "Especially coming up like that on the 5-on-3 with all those skilled guys they have on their team. They mean everything for us."

Forsberg scored the game's first goal at 9:41 of the opening period.

With Nashville on a power play, Forsberg's wrist shot beat Philadelphia goaltender Ray Emery on the glove side.

Nashville, winners in four of its last five games, is 12-1-1 when scoring first this season.

Giroux tied the game at 6:50 of the second with a wrist shot from the right circle with the Flyers on a 2-on-1 break.

Philadelphia had 58 seconds of a 5-on-3 advantage at the start of the second period but failed to convert on either power play.

"That was big to start," Nashville coach Peter Laviolette said. "Our guys did a real good job, a couple of big blocks, defended pretty well, and came back and scored some power-play goals after that."

Laviolette coached parts of five seasons in Philadelphia prior to being fired early last season.

With Matt Read and Giroux both in the penalty box serving high-sticking minors, Fisher scored on the rebound of a Forsberg shot at 13:57.

"I think that was the difference today," Philadelphia defenceman Niklas Grossman said. "Those kills in the second period couldn't get the job done, so it's something we've got to look at."

With Giroux still in the box, Wilson struck at 14:35 with a wrist shot from the left circle that beat Emery.

"Coming off the half wall there, I saw his glove side pretty open, so I just shot it there," Wilson said. "Previously on a rush I saw the same thing but didn't hit it where I wanted to, so it was nice that I could there."

With Emery pulled for an extra attacker, Wilson scored again at 16:42 of the third.

Philadelphia's road penalty killing woes continued. They entered the game 29th in the league at 69.4 per cent and killed off just two of five Nashville power plays.

"Five-on-three is tough," Philadelphia coach Craig Berube said. "I thought that was the difference in the game. We had a five-on-three and didn't get a whole lot generated, and they scored."

Pekka Rinne made 26 saves for Nashville. He recorded his league-leading 23rd win of the season.

Notes: Nashville C Paul Gaustad returned to the lineup after missing six games with a lower-body injury. Forsberg's 14 goals are four short of the Nashville franchise record for goals by a rookie, currently held by Alexander Radulov. Nashville D Roman Josi had a pair of assists. Giroux has points in four consecutive games... The Flyers have not scored a power-play goal in their last five games.