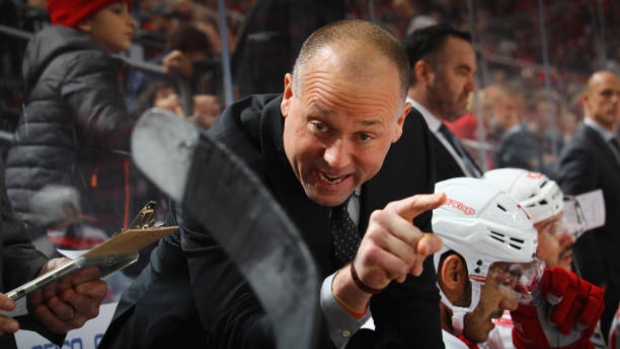 Jeff Blashill has a 128-142-47 record since taking over behind the bench with the Detroit Red Wings in 2015 and is currently coaching on an expiring contract.

"The Detroit Red Wings don’t like being at or near the bottom of the league, but that won’t negatively impact head coach Jeff Blashill who’s on the final year of his contract," McKenzie said on Insider Trading Thursday. "The expectation is the Red Wings, even before the end of this season, may begin extension negotiations with Blashill.

"So even though the Wings are 30th place overall right now, they’ve liked the way Blashill has handled the young kids and that they’ve continued to develop. And in spite of the fact that they don’t have nearly as many points as they’d like, the Wings have been very competitive, well-structured and well-coached over the course of this season. So the fault of the Detroit Red Wings’ season is not being laid at the feet of the head coach."

The Red Wings reached the playoffs in Blashill's first year as head coach, exiting in Game 5 of their first-round series against the Tampa Bay Lightning. The team, however, has failed to post a winning record since.

The rebuilding Red Wings currently have 10 players under the age of 25 on their 23-man roster.

Blashill, 45, was head coach of the AHL's Grand Rapids Griffins from 2012-15 before being promoted to the head coaching role with the NHL club.