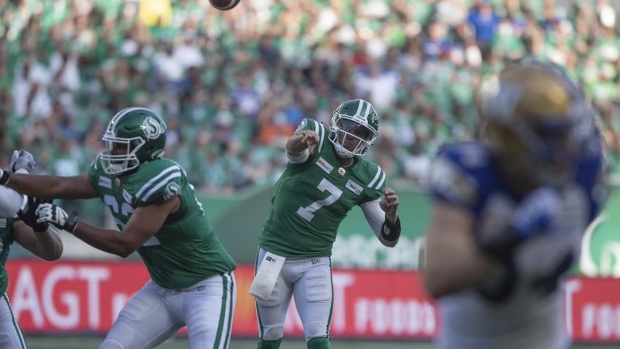 If the Saskatchewan Roughriders want to punch their ticket to the 108th Grey Cup in Hamilton on Dec. 12, they’re going to have to go through the best team in the CFL.

The 11-3 Winnipeg Blue Bombers will host the Roughriders Sunday afternoon with a trip to the league’s biggest stage on the line.

You don’t have to look too long in the rearview mirror to find the last time these two teams met in a game like this.

In 2019, the Blue Bombers defeated the Roughriders 20-13 in the Western Final en route to their 11th Grey Cup victory.

After the Hamilton Tiger-Cats and Toronto Argonauts square off in the Eastern Final, catch the Riders battle the Blue Bombers LIVE Sunday at 4:00 p.m. ET/1:00 p.m. PT on TSN1/3/4, TSN.ca, the TSN App and on TSN Direct.

Here is a look at everything you need to know ahead of Sunday’s Western Final.

How the Riders got here

When quarterback Cody Fajardo rushed for a one-yard touchdown to give Saskatchewan a 27-24 lead over the Calgary Stampeders with under three minutes to play in the Western Semi-final last Sunday, it appeared as though the Roughriders were going to cruise into the Western Final.

But a Rene Paredes field goal only minutes later tied it for the Stamps, sending the game to overtime, where Riders kicker Brett Lauther played the hero.

Lauther opened the scoring in overtime with a 20-yard chip shot to give the Roughriders the lead, and later punched their ticket to the Western Final with his 34-yarder to give Saskatchewan the 33-30 win over the Stampeders.

The Roughriders managed the ups and downs of the pandemic-shortened 14-game CFL regular season and wound up finishing with a 9-5 record, good for second in the West Division behind the Blue Bombers.

Fajardo, after finishing runner-up in Most Outstanding Player voting to Hamilton’s Brandon Banks in 2019, once again was the leader this team needed in 2021.

But he will be looking to bounce back this week after his four interceptions against Calgary in the semi-final.

Despite their strong regular season, the Roughriders will need to be a lot better on Sunday against the Blue Bombers than they were during the entire 2021 season.

Winnipeg won both games against Saskatchewan this season, outscoring them 56-17.

How the Blue Bombers got here

Any way you slice it, the Winnipeg Blue Bombers were the best team in the CFL this season.

They opened the season 2-0 before falling 23-20 to the Toronto Argonauts in Week 3.

But since then, the Blue Bombers have been nearly unstoppable.

Winnipeg answered their first loss of the season by winning nine consecutive games, and clinched first place in the West Division in Week 12  – with a 45-0 shutout of the BC Lions.

Somehow, the team’s season is much better than their 11-3 record would indicate.

The Bombers enter the playoffs as losers of their last two games, but those games were rather meaningless to the team, given they had already secured the top seed, and a majority of the team’s backups got the lion's share of playing time.

Winnipeg will host the Roughriders at IG Field Sunday and put their perfect 7-0 home record this season on the line.

The seven wins came in dominating fashion as they outscored their opponents by a total of 134 points in those games.

Winnipeg, on top of their 2-0 record against Saskatchewan this season, has gotten the better of the Roughriders in their last two playoff meetings dating back to 2018.

But the Bombers aren’t getting ahead of themselves and understand the challenge in front of them.

“It does feel like a long time ago,” Winnipeg quarterback Zach Collaros said about the two wins over Saskatchewan this season. “Watching those two games, they were a little different in both of them in how they approached us. Definitely different than how they've played the last five or six games.”

Collaros has had a full season with the team in 2021, unlike in 2019 when he joined the Bombers late in the season to help end the club’s 28-season championship drought.

“It's better because you know the guys in the locker room, you have a better familiarity with the system and the terminology and all those things,” Collaros said.

Sunday’s winner will advance to the Grey Cup to meet the victor of the Eastern Final between the Tiger-Cats and Argonauts.