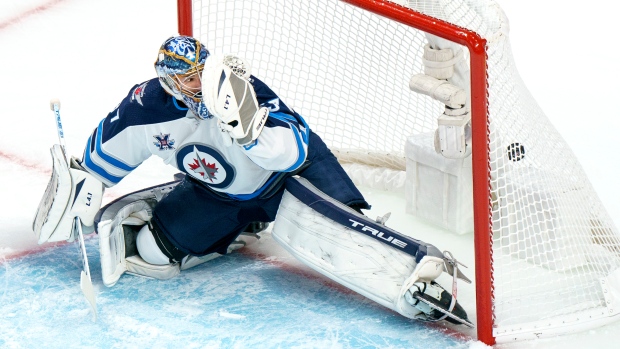 Connor Hellebuyck isn't a fan of the NHL's latest move to combat the spread of COVID-19.

The league pushed up the start of its traditional holiday schedule pause by 48 hours because of coronavirus concerns and full-on outbreaks fuelled by the Omicron variant that have led to 45 games being postponed since Dec. 13.

The Winnipeg Jets goalie, however, doesn't agree with a decision that will see players off starting Wednesday before returning to work Sunday.

"I can't speak for everyone, but the feeling for myself … it's a little overkill," Hellebuyck told reporters in Winnipeg on Tuesday. "You see leagues like the NFL, who are adapting and, I think, doing things right."

More than a third of the NHL had either been shut down or voluntarily closed team facilities through the holidays before the league announced Wednesday's schedule would be added to the list of contests needing new dates.

As it stands, roughly 15 per cent of players — all but one NHLer is considered fully vaccinated — are in the league's COVID-19 protocol.

"It sucks, but it's Christmas time, so we're enjoying the break," said Hellebuyck, who contracted COVID-19 last summer before receiving the jab. "Use this time as a little mental reset.

"See family, enjoy the holidays, and enjoy what we have."

The league, which paused cross-border travel until after the break, had two remaining games scheduled Tuesday before going dark until Boxing Day, but the NHL announced Washington's matchup in Philadelphia against the Flyers was off because of COVID-19 concerns with the Capitals.

The holiday break was originally slated to begin Friday.

The schedule is set to resume Monday with 14 contests, although more postponements seem likely with a number of clubs dealing with multiple COVID-19 cases.

The Toronto Maple Leafs, who are slated to play in Columbus against the Blue Jackets on Monday, announced forwards David Kampf and Ilya Mikheyev, defenceman Rasmus Sandin and netminder Petr Mrazek have been placed in protocol.

The Leafs now have a total of 11 players — including captain John Tavares and goaltender Jack Campbell — in isolation along with head coach Sheldon Keefe, two assistants, and three other members of the organization.

The Calgary Flames, who have endured by far the worst outbreak this season, had gone three days without a positive test and reopened its facility to employees that remained negative with daily testing, but added goalie Dan Vladar to protocol.

Calgary, which has seen six of its games postponed, now has a total of 20 players and 13 staff members sidelined. The Flames are scheduled to host the Edmonton Oilers on Monday.

Back in Winnipeg, Hellebuyck was also asked about NHLers going to the Olympics, which is now almost certainly off due to the pandemic's disruption to the league's schedule that has caused an even 50 games to be postponed or rescheduled.

The 28-year-old former Vezina Trophy winner was expected to feature for the United States, but will now have to hope for another chance in 2026.

"It was going to be an awesome opportunity to play, but I guess that's just what we have to deal with."

This report by The Canadian Press was first published Dec. 21, 2021.