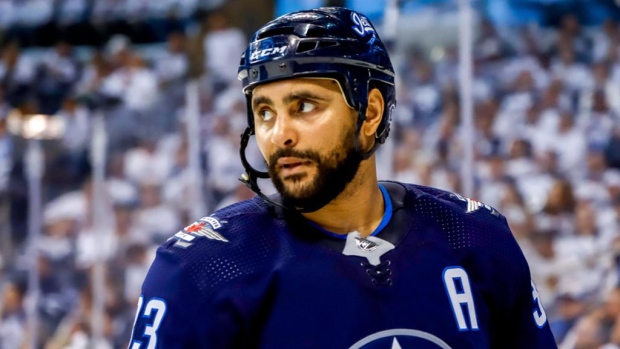 My understanding is Byfuglien had the surgery in Minnesota last week. Loose timeline on recovery, but could be upwards of 4 months.

TSN Hockey Insider Bob McKenzie reported Wednesday that Byfuglien recently underwent ankle surgery to take care of issues from the high-ankle sprain he suffered late last season. He added that "it's certainly premature to say Byfuglien will return to active duty in the NHL this season but there is a sense if he does feel healthy again, he may be inclined to return at some point."

As just reported ono @NBCSN, Dustin Byfuglien recently underwent ankle surgery to take care of unresolved issues from the high-ankle sprain he suffered late last season. What that means for his future and whether it could, in time, lead to his return to WPG remains to be seen.

McKenzie added that it's believed one of the big factors why Byfuglien opted not to play this season is because his ankle was so troublesome.

NHLPA is in discussions with Byfuglien’s agent, Ben Hankinson and are currently reviewing the case. If it’s determined Byfuglien hurt his ankle playing hockey the financial side of this matter could get complicated.

According to TSN Hockey Insider Darren Dreger, Byfuglien's agent, Ben Hankinson, is in discussions with the NHLPA reviewing the case. If it's determined Byfuglien hurt his ankle playing hockey, the financial side of the matter could get complicated.

"There's not much that I can really enlighten you with more than what's already out there," Jets general manager Kevin Cheveldayoff told reporters on Thursday. "Going back to the start of training camp - that's when I met with Dustin and those are all pretty well documented.

"Obviously over the course of time, he's had ankle surgery now and we're dealing with that. We're in constant conversations with his agents and that's where we're at."

It’s believed one of the biggest factors why Byfuglien opted not to play this season is because his ankle was so troublesome. That begs the question, why not report to WPG training camp, go on injured reserve, rehab it or get surgery or whatever and get paid to do so?

He is signed through next season at a cap hit of $7.6 million.