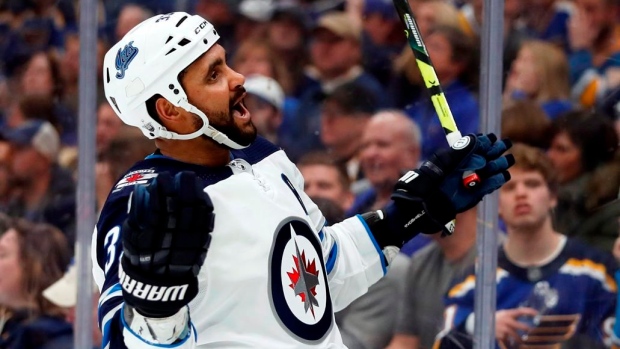 General manager Kevin Cheveldayoff said he found out a couple of weeks ago the 35-year-old wouldn't be returning to the ice this season.

"There's obviously some different things behind the scenes. There's still a work in progress there," Cheveldayoff told the Jets website. "Interestingly enough, Dustin essentially made the decision not to play this year and that essentially kind of squashed anything that might've happened for maybe someone to put him in their lineup this year. We can still trade him at any point in time, you know, with respect to the future as well, it's still a work in progress."

Cheveldayoff said he knew Byfuglien wouldn't play this season earlier this month "when he should have progressed to the skating aspect of the rehab and he never did."

Byfuglien carries a salary-cap hit of US$7.6 million both this season and next, which means the Jets haven't been able to replace those dollars on their roster in 2019-20 with his status in limbo.

There have been reports the Jets are working toward a contract termination.

The GM added he had no sense of Byfuglien's intentions for next season.