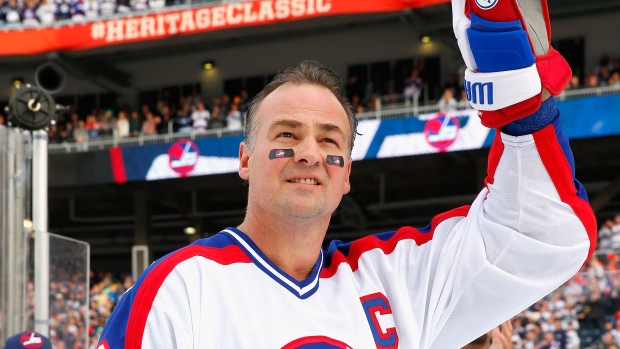 One of the greatest players in Winnipeg Jets history is gone.

Hockey Hall of Famer Dale Hawerchuk has died at the age of 57, the Barrie Colts confirmed on Tuesday.

A native of Toronto, Hawerchuk had experienced a recurrence of cancer in recent weeks.

A five-time All-Star, Hawerchuk appeared in 1,188 games over 16 seasons with the Jets, Buffalo Sabres, St. Louis Blues and Philadelphia Flyers. Posting seven seasons of 40 or more goals, including 53 in 1984-85, Hawerchuk, a centre, finished his career with 518 goals and 891 assists. His 1,409 points are 20th all-time in National Hockey League history.

Taken with the first-overall pick of the 1981 NHL Entry Draft by the Jets out of the Cornwall Royals of the Quebec Major Junior Hockey League, Hawerchuk starred in the junior game. Accumulating 286 points over his two seasons with the Royals, Hawerchuk led the team to back-to-back Memorial Cups in 1980 and 1981.

Individually, Hawerchuk was named the QMJHL Rookie of the Year and playoff MVP in 1980 before nabbing the Canadian Major Junior Hockey League Player of the Year and Memorial Cup MVP awards in 1981.

Hawerchuk became an instant sensation in the NHL, immediately enlivening a moribund Jets team. Finishing with just nine wins in 1981, Hawerchuk helped lift the Jets to an increase of 22 wins and 48 more points in 1982 to reach the NHL postseason for the first time in franchise history.

Individually, Hawerchuk notched 45 goals and 58 assists to become the youngest player in NHL history to hit the 100-point plateau at the age of 19 (since broken by Sidney Crosby) en route to winning the Calder Trophy as the NHL's rookie of the year.

Hawerchuk would go on to spend eight more seasons with the Jets, reaching the 100-point mark five more times, before a blockbuster trade at the 1990 draft. The Jets sent Hawerchuk and the 14th-overall selection in the draft (that became Brad May) to the Sabres in exchange for three players including Phil Housley and the 19th-overall pick (that became Keith Tkachuk). Like with the Jets, Hawerchuk would star with the Sabres.

In his four full seasons in Buffalo, Hawerchuk tallied no fewer than 86 points. The Sabres reached the playoffs in every season that Hawerchuk played there, including their famous sweep of the Boston Bruins in the first round of the 1993 playoffs that concluded with May's "Mayday!" overtime winner.

Hawerchuk signed with the Blues as a free agent in the summer of 1995 before a trade at the deadline to the Flyers that season. In 1996-97, Hawerchuk appeared in only 51 games, dealing with a degenerative hip condition. That summer, Hawerchuk would retire from hockey at the age of 34.

Hawerchuk also made a significant impact on Canada's fortunes at international tournaments, most famously in the 1987 Canada Cup. While he scored four goals in the tournament, it was a faceoff win by Hawerchuk in the deciding game of the final against the Soviet Union that had the greatest influence.

After splitting the first two games in overtime thrillers, Canada and the USSR were played the deciding game at Copps Coliseum in Hamilton, Ont. By the eight-minute mark of the first period, the Soviets would open up a 3-0 lead on goals from Sergei Makarov, Alexei Gusarov and Slava Fetisov.

Canada would storm back, though. Goals from Rick Tocchet, Brian Popp, Larry Murphy, Brent Sutter and Hawerchuk, who also assisted on Sutter's goal, put Canada up 5-4 with eight minutes to go. A goal by Alexander Semak, his third of the tournament, at the 13:39 mark even matters again and made a third straight overtime appear to be inevitable. But Hawerchuk would ensure that it wasn't to be.

With 1:30 left in the third period, there was a faceoff in the Canadian zone. Head coach Mike Keenan sent out a forward line of Hawerchuk, Mario Lemieux and Wayne Gretzky - all three of them centres. Hawerchuk would take the draw against Slava Bykov and win it in a scrum, taking out two Soviet forwards in the process as they collided together.

Using the boards, Lemieux poked the puck past the defenceman to escape the zone and push the puck forward to Gretzky. As Gretzky broke down the wing with Murphy in a two-on-one, Lemieux followed the play. Gretzky dropped a pass back to Lemieux, who beat Sergei Mylnikov glove-side with 1:26 remaining to give Canada a 6-5 win and the Canada Cup.

Hawerchuk would go on to compete for Canada again at the 1991 Canada Cup, winning another gold medal.

After his playing career, Hawerchuk got into management and coaching. In 2007, he purchased the Ontario Provincial Junior A League's Orangeville Crushers for whom he would also serve as president and head coach. He left the position in 2010 to become the head coach of the Ontario Hockey League's Barrie Colts. In his nine seasons behind the bench with the Colts, Hawerchuk would lead the club to four division titles and a trip to the OHL finals in 2013.

In the fall of 2019, Hawerchuk stepped away from the club after his initial diagnosis of stomach cancer.

Hawerchuk was inducted into the Hockey Hall of Fame in Toronto in 2001.